Slaves to the machine: Cyber-Proletariat, by Nick Dyer-Witheford

Review: Technology empowers but also impoverishes us, according to a dense but rewarding treatise on economic, social and cybernetic theory, writes Peter Murphy 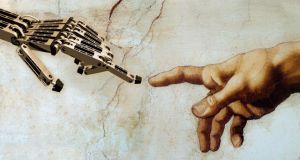 In the red corner: the latter-day apostles of the church of Ned Ludd who denounce cyberculture as a vampiric organism that has sucked the lifeblood out of the film industry, the music business and publishing, and who contend that the internet has shredded our attention spans, decimated local trade and rendered us susceptible to corporate and state surveillance.

In the blue corner: net evangelists waiting for the singularity rapture, positing a human-artificial-intelligence mind meld as the next stage in evolution, maintaining that the web has freed us from capitalist notions of copyright, empowered citizen journalists, erased geopolitical borders and provided the masses with the means to combat censorship and totalitarian regimes.

Cyber-Proletariat: Global Labour in the Digital Vortex seeks to referee between these oppositional ideologies. In his introduction Nick Dyer-Witheford, who teaches in the faculty of information and media studies at the University of Western Ontario, and is the author of three previous studies of info tech and socioeconomics, states his case: “This book is about digital capital’s making of a planetary working class tasked with working itself out of a job, toiling relentlessly to develop a system of robots and networks, networked robots and robot networks, for which the human is ultimately surplus to requirements . . . It is about a global proletariat caught up in a cybernetic vortex.”

Power, says the author, always comes down to class (a belief that has made unlikely bedfellows of such controversialists as Professor Griff of Public Enemy and Jim Goad, author of The Redneck Manifesto). All manifestations of the abuse of that power, he maintains, are class based. “Who can doubt, seeing the difference in the condition of financier super-yacht owners and immigrant sans-papiers, of the social media billionaire and the minimum-wage fast-food worker, that class exists? . . If the reader at any point feels his or her eyes glazing over, we recommend a thought experiment: for class read ‘position in the vampire food chain’; for class struggle read ‘the battle against vampires’; for class and cybernetics, ‘vampires – but perhaps also vampire-slayers – with smartphones’.”

Paradox of protest But here is the paradox of protest in the digital age: the internet provides conduits for organised revolt against state oppression and economic exploitation – from the Occupy and Arab Spring uprisings to WikiLeaks and Anonymous – but web-savvy insurgents also enrich the coffers of corporate social media and telecommunications systems by dint of their very participation in the online matrix. In other words, the message does not negate the medium.

So the six-billion-dollar question: does technology empower or impoverish the proletariat? The answer is both. Or, rather, it does one, then it does the other. This book’s early chapters examine the age-old struggle between manpower and machination, the wage slave pitted against the machine. Automation increases productivity, but it also puts humans out of work, and if the average Joe and Jane are deprived of disposable income they cut back on excess spending, starving the capitalist food chain. This worker/consumer binarism has long been a tenet of capitalist viability. If it breaks down so too does commerce. But the digital revolution has further complicated matters. Until the end of the 20th century the pursuit of profit depended on tangible products and services. Millennial info tech changed not just the nature of work but also its value. It put a price on vapours: personal information, web traffic, financialisation, credit, debt, speculation.

To illustrate this evolution (or de-evolution, depending on your politics) Dyer-Witheford contrasts studies of two major US industrial centres. Consider the plight of Detroit, once the United States’ model city of the future, now the city of no future, the world’s most popular stop for apocalypse tourists and connoisseurs of ruin porn. Under Henry Ford automation transformed car manufacture from a craft industry to an assembly-line behemoth, and made Detroit a bulwark of US commerce. Then Toyota took these production methods, refined and streamlined them, and beat the Americans at their own game. Detroit went from megacity to necropolis in half a century. Detroiters are now more likely to make money from tearing down and cannibalising derelict factories than they are from working in them.

But as Detroit began its slow decline the new Jerusalem of Silicon Valley was under construction on the west coast. Cue the rise of the computer industry, culminating in the dotcom boom, the property bubble and the subprime mortgage fools’ gold rush. As ever there was untold human collateral damage. For every white male hacker professional drawing down six figures a year there was a Latino woman cleaning his office for minimum wage before moving on to her second or third job of the day. For every Facebook workers’ colony and Google bus route there was an outsourced manufacturing operative suffering headaches and nosebleeds from working on toxic semiconductor chips, or a child labourer mining coltan for mobile-phone production or platinum for hard drives, or a cube-confined drone working long hours for chump change in labour camps or call centres in Mexico, China and India. Cybernetics giveth, but it also taketh away.

Bosch meets ‘Blade Runner’ The literal, physical fallout of cybercapitalism is portrayed in lurid detail in a chapter that examines how burner phones became indispensable tools for the survival of migrant workers. Digital technology is cheap but nonbiodegradable. Tracts of land in China, India and Africa have become ewaste landfill sites, Bosch-meets-Blade Runner dumps where scavengers scour a filthy modern tide of computers, monitors, televisions, phones and etoys for recoverable metals and components. In these ad-hoc shanty towns everything is smeared with soot and smoke and toxic fumes, as teenage trash harvesters heap detritus on bonfires to melt plastic from metal, while children trawl the site with magnets tied to string. From Spielberg’s AI to Dickensian any-old-iron men in a mouse click.

Cyber-Proletariat is not a reader-friendly book. It’s a highly condensed treatise on economic, social and cybernetic theory. Even the most interested laypeople will find themselves bleary eyed from trawling through passages on vortex patterning and algorithm analysis.

The book works best when it focuses on tangible people, places and case histories – human stories – rather than Marxism or economic abstractions. But if Cyber-Proletariat is a laborious read, it rewards the work – more than can be said for capitalism in the digital age.