Sex education began in the US a century ago to control VD and unwanted pregnancy. In Sweden, the focus is on self-expression and pleasure but it is a hotly contested issue worldwide, explains the author of a new book 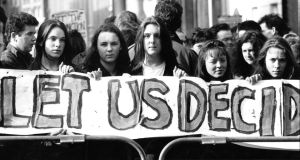 Schoolchildren protest outside Leinster House in 1992 supporting the right of X, a 14-year-old rape victim, to travel for an abortion. Photograph: Eric Luke 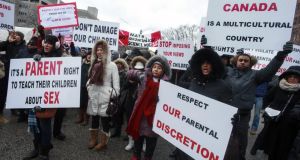 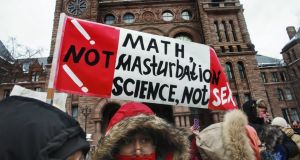 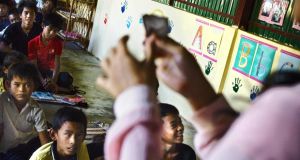 A teacher in Battambang, Cambodia, explains how to use a condom to the students’ delight. Photograph: Jonas Gratzer/LightRocket via Getty Images

In 1978, an Irish educator asked Swedish Association for Sexuality Education chairman Carl Boethius how school-based sex education in his country had affected venereal disease and teen-pregnancy rates. Boethius kindly replied that those rates were indeed lower in Sweden than in most parts of the West, including Ireland, but that Swedes “do not know if these positive figures are partly due to sex education”.

Besides, Boethius added, that wasn’t the point. “The fundamental reason for sex education – according to the Swedish view – is the right to knowledge, not ideas about special effects,” Boethius wrote. His organisation’s main goal was to help each individual experience sex “as a positive factor” in her or his life. And a frank, factual sex education was the best route to that.

The exchange underscored a fundamental division over sex education, which has become a source of new tensions in our so-called age of globalisation. The more that people and ideas move across borders, indeed, the more contested – and the more constrained – sex education has become.

Sex education began in the United States about a century ago to control venereal disease and out-of-wedlock pregnancy. That’s still the central purpose of the subject in the US and in the United Kingdom and Ireland, where debates centre on the collective outcomes of sex education: liberals say it makes kids behave more responsibly, while conservatives say it simply makes them have more sex.

Starting in the 1950s, however, countries in continental Europe started to teach about sex as a vehicle of individual expression – and, even, of individual pleasure. The leader of this trend was Sweden, which in 1956 became the first nation-state to require sex education in all of its schools. “Exhaustive and correct sex education at an early age is imperative in order to eliminate ignorance and prejudice, neuroses and sexual disharmonies,” Swedish authorities declared. Stripping away myths and fears, sex education would help individuals develop and determine their own sexual destinies.

By the 1980s, this view had become the dominant one in international public health circles. “At present it is not possible to define the totality of human sexuality in a form that would be acceptable to all countries,” the World Health Organization resolved in 1983, “but every person has a right to receive sexual information and to consider accepting sexual relationships for pleasure as well as for procreation.”

As the WHO’s own language suggested, however, it simply wasn’t possible to gain universal accord on the idea of youth sexual autonomy and pleasure. In 1994, when the International Conference on Population (ICPD) adopted a resolution supporting sex education for adolescents, dissenters included Egypt – the host of the conference – and four other majority-Muslim countries. The sex-education resolution “could be interpreted as applying to sexual relations outside the framework of marriage”, an Iranian delegate explained, “and this is totally unacceptable”.

Two majority-Catholic countries – El Salvador and Guatemala – also issued dissents from the resolution; so did the delegation from the Vatican, which had sent an envoy a few months earlier to Tehran to co-ordinate resistance to the ICPD. In the West, meanwhile, conservatives proclaimed a new global front in the culture war over sex education.

“While this may be a bold agenda at Washington dinner parties, to traditional societies in Latin America, Africa and the Islamic world, it is the essence of decadent, godless Western materialism,” declared US columnist Pat Buchanan, a former aide to Richard Nixon. Other Americans rallied to the World Congress of Families, which staged international protests against sex education, gay rights and abortion.

With the onset of the HIV/AIDS crisis, nearly every country in the world taught some type of sex education. But in most places, the subject more closely echoed the warnings issued in the United States – where abstinence-only curricula came to the fore – than the continental European approach, which continued to emphasise individual rights and pleasure.

When Africans and Asians moved to the West, not surprisingly, they brought these attitudes with them. So sex education became a hotly contested question even in liberal bastions like Sweden and Holland, which saw their immigrant populations skyrocket in recent years. And in the United Kingdom, where sex education was far less explicit than on the Continent, it remained too explicit for the country’s burgeoning Muslim community.

“In Islam extra-marital sex is considered to a dreadful sin,” explained an immigrant spokesman in England, where some Muslim parents held their children out of school to protest at sex education. “Adultery is condemned by stoning to death . . and fornication among unmarried people is penalised by whipping.”

Against this backdrop, many teachers decided that the safest move was to avoid sex education altogether. And it was was even easier for teachers – and their students – to ignore the subject when it did not appear on national tests, as an Irish teacher admitted in 2007. “Anything that doesn’t have an exam at the end of it is going to be a doss as far as students are concerned,” the teacher wrote. “It’s the class where they can go and chat.”

Of course, young people got much more sexual information from mass media– and from each other – than they did in school. “A 12-minute filmstrip is hardly a match for two years of R-rated films every weekend,” an American educator admitted in 1981. “Schools are a puny David without even a sling-shot against the media Goliath.”

Today, in our globalised era, that’s even more the case. With the rise of the internet, kids are exposed to far more graphic sexual material than ever before. But globalisation has also powered the movement of millions of adults across borders, where they have joined hands with native-born conservatives to restrict sex education. When it comes to sex, schools are still a puny David. And they’re simply no match for the twin global Goliaths of mass media and mass migration.

Jonathan Zimmerman teaches history and education at New York University. He is the author of Too Hot to Handle: A Global History of Sex Education, which is published on March 25th by Princeton University Press.