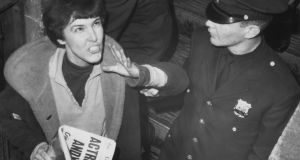 Actress-playwright Valerie Solonas (28) shouts back at crowd as she is escorted into police headquarters. She was arraigned for attempted murder and possession of a deadly weapon in the shooting of “pop” art and movie pioneer Andy Warhol. Photograph: Bettmann Archive/Getty Images

For a man, Valerie Solanas’ notorious SCUM Manifesto provokes the same kind of alarmed interest as jihadi magazines like Dabiq or Inspire – the frisson of seeing oneself through the eyes of those who will one’s extermination.

While SCUM – “Society For Cutting Up Men” – fulfils all the requirements for hate-speech, it differs from the likes of Anders Breivik’s manifesto or Adolf Hitler’s Mein Kampf not only by its occasional funniness, but by Solanas’s relative ineptitude as a terrorist or despot. When she took her war against men to the streets, the bullet she fired into Andy Warhol’s chest (he “refused to pay attention to me”) failed to kill him, though it left him traumatised for life.

The reference to Hitler is not entirely unwarranted. Solanas writes about men the way Hitler did about Jews or the way Isis fighters do about “infidels”: 2The elimination of any male is, therefore, a righteous and good act”. She even advocates eugenics: “When genetic control is possible - and soon it will be - it goes without saying that we should produce only whole, complete beings, not physical defects of deficiencies… such as maleness”.

I propose an alternative way to read this scary book: wherever Solanas writes “the male” or “men”, read instead “Valerie Solanas”. The hate thus converts back to its basic poignancy, the rage to pain. Victim-criminal of a screwed-up world, Solanas/the male lived “trapped inside himself, incapable of empathising or identifying with others, of love, friendship, affection, of tenderness. He is a completely isolated unit”.