‘Currency, Credit and Crisis’ by Patrick Honohan: a valuable insight into the Central Bank 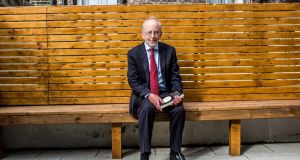 Patrick Honohan was governor of the Central Bank of Ireland from 2009-2015. Photograph: James Forde

The prospects of Kilmacud Crokes in the approaching Leinster semi-finals. A home defeat of the Irish football team by Norway, despite an early penalty by Shane Long. The announcement by Alex Ferguson that “retirement is for young people”.

These, and other sporting topics, may have been on the mind of Des Cahill when he took a phone call in the Morning Ireland news room on the morning of November 18th, 2010.

It is also likely that they would quickly have receded when the caller identified himself as Patrick Honohan, the governor of our Central Bank, and asked to be interviewed.

He confirmed, on air, that negotiations were underway between the government and the International Monetary Fund.

This interview, conducted while attending a Governing Council meeting of the European Central Bank in Frankfurt, transformed the public profile of the governor. Readers looking for an insight into the personal and political dramas of the crisis years will be disappointed by Currency, Credit and Crisis.

Alternatively, this new book by the man who was the leader of our Central Bank at the pivotal moment in our national economic fortunes is replete with policy insight and analysis.

As Minister for Finance I am always alert to the “3Cs” in our economy. These are the status of credit levels, capital expenditure (including spending on housing and infrastructure) and current spending (or what we spend on our public services).

Swings in their performance can influence everything from our international competitiveness to the number of families in search of a permanent home. They can make a difference between an economy that is sustainable or an economy with imbalances that will ultimately let down the society upon which it depends for support.

The currency a country adopts has consequences for other economic policies

Patrick Honohan has a similar taste for alliteration and brevity when he identifies “Currency, Credit and Crisis” as crucial for understanding the role of central banking in Ireland and Europe.

The dispassionate tone is established early with an introduction to the “banking dramatis personae” listing institutions rather than individuals. However this is not an academic work, and is accessible to the informed reader.

The book opens with a brisk overview of the five different currency regimes that Ireland has participated in over the last century. Beginning with our use of sterling and concluding with our membership of the eurozone, Honohan sets currency choice as a defining context for other policy decisions.

He concludes that “each type of exchange rate regime requires accompanying fiscal policies and wage-setting institutions that are well adapted to the regime”. More plainly, the currency a country adopts has consequences for other economic policies.

Honohan then moves to “credit”, asking why Ireland escaped bank failures for more than a hundred years and then succumbed to a colossal crisis. The roots of this challenge are conventionally explained, pointing to the fact that blind faith in banks adhering to accounting standards was not the same as ensuring their financial stability.

The teasing out of the policy options for dealing with personal indebtedness during the crisis is particularly interesting. When I write that this should be required reading for secondary school students of business and economics I mean this as high praise.

It lucidly explores the options open to policy-makers at this most difficult of times. Honohan argues that “debt relief should have been a larger component of Irish banks’ approach to customer over-indebtedness”.

Our approach is compared with that of Iceland, before concluding that the fragility of the national finances, combined with unintended consequences for debtors who could afford to pay, meant no such scheme was agreed.

The style of exploring alternatives is continued in the most topical chapter of this book when the fateful decisions behind the bank guarantee are explained.

The brisk conclusion is that “the banking guarantee could have been improved on, even given the limited information available on the night of the guarantee”.

Honohan wonders whether “the long run of national economic success” gave false confidence that our national economic strength could absorb the hidden losses of our banks. These losses eventually required Irish banks to access emergency funding from the Central Bank.

This, combined with the erosion of the health of our national finances due to recession, led to our entry into the “bail-out” programme.

The skill and professionalism of our representatives in negotiating the terms of entry into this programme are well documented, which is a significant value of this book.

This period in our national experience is too recent to feel part of history. The time was so difficult that it feels audacious to recognise that anything positive was achieved.

There is scant reference to the call to Morning Ireland. The claim that “it had some steadying effect on confidence and if anything improved the negotiating atmosphere somewhat to Ireland’s advantage” is contested by many.

This work, and, I hope, other books yet to come, demonstrate that successive servants of the State worked with great skill during years of immense trial. These servants include politicians, who have the opportunity to tell their story. It also includes countless civil servants, including many who are still serving, who are precluded from so doing. They have to await the verdict of history.

This is not to say that mistakes were not made during our recovery period. They were, and they contributed to and caused great difficulty. But acknowledgement of this should also allow some recognition that the exit from the bail out programme, while now assumed to be inevitable by some, was seen as impossible by many during our crisis.

During this period of economic growth, we focus now on our many crises and difficulties. This is as it should be. But our current levels of employment and income growth would have been dismissed as impossible during our darkest days.

So the acknowledgement that “with much more at stake than the lenders, the Irish negotiators left little on the table in these detailed mid-course negotiations” understates the importance of these efforts.

The concluding chapters might be elusive for the general reader. The evolution of emergency lending policy in Europe is not a subject for all. The analysis of “macro aggregates” might seem a bit distant from the costs of this period.

Honohan warns that “Irish governments fell foul of bad ideas falsely distilled from simplistic versions of prevailing orthodoxies”. Whether this was the attraction of government spending-led growth in the 1970s or the “apparently crass belief in untrammeled financialisation” of the 2000s, the damage of such beguiling policies is now clear.

On balance Honohan concludes that “Ireland has prospered in the era of globalisation” but that “the resources of the nation have not been deployed as effectively as they might to spread the fruits of national prosperity more widely”.

He argues that the role of central banks should continue to be relatively conservative but vital, protecting financial stability to allow the creation of resources for a better society. However, the responsibility is too serious to reside solely with any one institution.

Currency, Credit and Crisis offers a valuable and very readable insight into the work of an institution so important that its independence is protected by law.