Sara Baume’s adeptness as a writer shines through in her power to immerse the reader in her character’s senses, emotions and place on earth 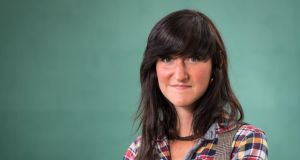 Book Title:
A Line Made by Walking

Sara Baume’s first novel, Spill Simmer Falter Wither, was a beautiful, very sad book about two pariahs, a physically unlovely man (“the plundering mass of my limbs and pork of my gut“) and a one-eyed, often vicious dog. The two travelled together across Ireland through a perfectly realised, emotionally resonant world of nature, human habitation, and memory. The novel was a moving portrayal of companionship and loyalty, and often very funny in scenes of the pair’s manner of living. Above all, its language and sensibility were a brilliant, a nigh-impossible fusion of precision, rhapsody, and guardedness.

A Line Made by Walking, Baume’s second novel, is a more intellectualised affair, a story told in the voice of Frankie, a young woman in her mid-20s, a would-be artist who is falling to pieces. Finished with art college, she is rudderless and uninspired as far as her own art is concerned. She has been living in a bedsit in Dublin, in the end just lying on the floor contemplating the filthy carpet. Rescued by her mother, Frankie ends up moving into her late grandmother’s bungalow, empty since the woman’s death two-and-a-half years ago. Thus begins a journey through grief, ostensibly or at least most palpably, for her departed grandmother. As she showed in her first novel, Baume is a master at breathing the past into domestic spaces, of showing the presence of goneness. Frankie’s grandmother is everywhere in the house, in the remnants of her belongings, in the greenhouse, in “the shape of her kneecaps in the old foam board, the mud print of her right palm around the rusted secateurs”, in the bedroom’s trinkets, “full up with her gazes, infused by her dying thoughts”.

But if Frankie is in mourning – the great Irish pastime – she is also grieving for her own confounded expectations. She is suffering from incapacitating depression, its deadening grip unclamping only to allow for obsessive-compulsive schemes and mental tics. She has replaced the old discipline and routine of college with rituals of self-testing. These take the form of summoning up and decoding examples of art – performance and conceptual art, chiefly – that address specific things, acts, phenomena, and abstractions: the sea, stars, falling, lostness, drowning, lying, intelligibility, motherhood, whiteness, and so on. There are more than 60 of these exegetical forays – which is a lot for one novel to support.

Over-abundant and slotted-in though they strike me, these passages do reflect Frankie’s impulse not only to find commonality with distinguished artists, but to extract referents to aspects of life rather than engaging in living. In addition to such mental exercises, she has set herself a project, that of finding and photographing dead animals according to strict rules; this will be her own work of art – photographs provided. There is something alienated and – need I say? – obsessive-compulsive, about both Frankie’s self-testing and her rule-bound collecting. She, herself, wonders in some dismay at her own inclination to reduce the authentic, incidental things of the world to instances of art:

An uneven arrangement of timber planks on the verge of a dual carriageway: art.

The sound of oboes from a decommissioned trawler lilting along a quayside in the dead of the night: art

But what do ordinary people think these things are? Is their world more generally mysterious than mine because they are not so easily able to identify public sculpture?

She hears on the news of a baby, still living, found abandoned in a gateway: “I wonder if I’d been the one to find the baby in the gateway, would I have presumed she was art? And left her there?”

As Frankie goes through her days in the dilapidated, isolated house, she sifts through memories of what was, in fact, a happy childhood. In this way, her depression seems, at first, to have nothing at all to do with her past, and yet it is precisely her former good fortune that has brought her down. “My happy life,” she reflects, “was never enough for me. I always considered my time to be more precious than that of other people and almost every routine pursuit – equitable employment, domestic chores, friendship – unworthy of it. Now I see how this rebellion against ordinary happiness is the greatest vanity of them all.” Beyond that, her art-school training has made her, she believes, unfree: she has been “condemned by formal education to rationalise, conceptualise, interpret. Not just think, but rethink. Not just look for meaning, but make meaning all by myself.”

It is evidence of Baume’s true adeptness as a writer that there is no sense of merely posited meaning in her portrayal of this young woman’s predicament, the nature of depression and the key to its lifting. She follows Frankie’s efforts at returning to a feeling of living: frying vegetables in a dented pan, riding a bicycle, following the news, being visited by her mother, her sister, by Jehovah’s Witnesses. Baume is a virtuoso of metaphoric description: Dublin’s “riptide of jaywalkers”, a smashed frog’s “organs buttered across the tarmac”, “slugs . . . gnawing with their gummy lips”. The imaginative richness and limberness of Baume’s descriptions, their power to immerse the reader in Frankie’s senses, emotions, and place on earth, is where this novel truly excels – the art commentary seems mere academic gadgetry.

Katherine A Powers received the 2013 Nona Balakian Citation for Excellence in Reviewing from the National Book Critics Circle and is the editor of Suitable Accommodations: An Autobiographical Story of Family Life – The Letters of JF Powers, 1942-1963