Brazil’s stars today hide behind God but Sócrates took on a dictatorship, risking his safety. Only ex-player Gary Lineker follows his lead 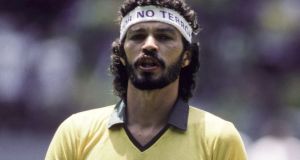 Brazil captain Sócrates at the 1986 World Cup with a headband “Yes to Love, No to Terror,” a response to the recent US bombing of Libya. Photograph: Bongarts/Getty Images

Two Brazilians leading their country on the world stage in front of capacity crowds. Both of them the biggest players of their generation, both of them with a message. And there, as they say, the similarities end.

When Neymar’s penalty hit the net last August and delirious Brazilians celebrated their first Olympic gold medal in football, the Barcelona star slipped on a headband and threw himself into the celebrations.

He hugged his team mates and did a lap of honour but it wasn’t long before he was at the side of the pitch. Neymar, who a few months before stood in a Spanish court to defend himself on tax evasion charges, angrily swore at fans he thought had criticised him.

The headband he wore as he pouted and screamed read “100 % Jesus”.

Thirty years before, Sócrates had also worn a headband as he stood for the national anthem ahead of Brazil’s opening match at the 1986 World Cup. He, too, had a message to convey and after seeing a little girl in a tiara while flicking through Mexican TV channels, he painted slogans on a white sock, tied it around his head, and decided this was his medium.

The message on that first day was for his hosts, tens of thousands of whom had died or were made homeless in an earthquake nine months before. “Mexico Stand Tall,” it read.

The only voice consistently addressing questions such as immigration, human rights, and the future of Europe comes not from a player but an ex-player, Gary Lineker

In the games to come, Sócrates would send other messages written below his scruffy mane of black hair. “Yes to Love, No to Terror,” read one, a response to the recent US bombing of Libya. “No Violence,” read another. And the shortest, the one that best summed him up, simply said “Justice.”

“It’s a way of participating and I have to take advantage of that opportunity, right?” he explained ahead of the 3-0 win over Northern Ireland.

The differences in the messages and messengers are indicative not just of Sócrates’ unique greatness but of how footballers have become more submissive and less brave. As the world staggers into its most uncertain period for more than half a century, footballers have been shamefully silent on the big issues of the day.

In the United States, American athletes have taken courageous positions in support of the Black Lives Matter movement and much else. But over here few footballers, it seems, have informed opinions, much less a concerted or united stance on the issues that concern them and their fans. The only voice consistently addressing questions such as immigration, human rights, and the future of Europe comes not from a player but an ex-player, Gary Lineker.

Playing football is a political act and Brazilian footballers, Socrates said shortly before he died in 2011, lack the education or the desire to use their immense power

That silence is shocking in Europe but it is also felt keenly in Brazil, where Sócrates’s exemplary stance still casts a massive shadow. In Europe Sócrates is remembered for captaining the 1982 Brazil team, one of the greatest teams never to win the World Cup, but he is better known in his homeland for his political and social activism.

In the early 1980s he led Corinthians Democracy, the movement that gave players a say in the running of São Paulo’s biggest club. Under his captaincy, the Corinthians players – and the kit man, trainer, physio and everyone else involved with the team – voted on everything from how long to train to whether or not to the team coach should stop for a toilet break.

As two decades of dictatorship limped to a predictably pathetic end, Sócrates aggressively took politics to the people, side-stepping questions about defenders and tactics with demands for better schools and hospitals, higher wages, and most of all, democratic elections to replace the military rulers. In doing so he introduced the concepts of democracy and freedom of speech to generations of Brazilians who knew only repression.

What it didn’t do was inspire subsequent generations to get involved. Playing football is a political act and Brazilian footballers, Socrates said shortly before he died in 2011, lack the education or the desire to use their immense power.

“They have political power in their hands. There is a stage and there is an audience,” Sócrates said. “If politicians had that power they’d make hay with it. But to the contrary, footballers live in ghettos. And that I think is because of their lack of education growing up and because they have no idea of their social importance.”

Instead, today’s Brazil players hide behind religion. “God willing, we’ll get three points tomorrow. God willing, I’ll be called up for the national side. Everything worked out today, thank God.”

Their careers, you could assume, are not really theirs; responsibility is passed on to a higher power.

A few have taken part in anti-racism campaigns, most notably after two Santos players were abused by rivals in 2014. And a number, including Neymar, run their own foundations and do valuable work with global charities such as Unicef.

But none have spoken out about events in their homeland, a nation where the president was impeached last year in a highly questionable maneuver that many likened to a coup; where more than 3,000 people are shot dead by police each year; and where the biggest corruption scandal in the nation’s history has led to the arrest of dozens of politicians and businessmen.

It may be easy to criticise modern footballers for keeping quiet, especially in Brazil, where the vast majority start off poor and uneducated. Even those at smaller clubs are so mollycoddled they know little about the real world beyond the training ground and the hotel built by their team to keep them away from fans.

Sócrates was privileged in that he was middle class and educated. A trained physician – for six years he studied orthopedics and gynecology by day and ran laps by night – he was well equipped to deal with the big questions. And while his motives were not always pure – his larger aims dovetailed nicely with a desperate desire for personal freedom – he was one of the few people brave enough to speak out.

By openly questioning the dictatorship he endangered not just his commercial deals but his personal safety. Brazil’s military were not as brutal as those in Chile or Argentina, but they had already tortured and murdered hundreds of leftist opponents. They were not likely to harm Sócrates but one of his team mates was arrested for cocaine possession, a charge he said was trumped up and was dropped a few months later.

Most importantly, and here’s where he differs most from the Neymars of the world, Sócrates was hungry for knowledge. After an early career in which he lauded the regime, endorsed the need for censorship, and most laughably, rejected any suggestions that sport should mix with politics, he arrived in São Paulo and came face to face with the realities of big, bad Brazil. It took him some time but he asked questions. He wanted to know what was really going on. And once he worked it out, he became one of the regime’s biggest critics.

Today’s footballers show no such willingness to engage, much less question the powers that be. It is a great tragedy. And a disservice to the memory of Sócrates, football’s great thinker and greatest revolutionary.
Andrew Downie is the Scottish author of Doctor Socrates: Footballer, Philosopher, Legend which was published last month by Simon and Schuster and is reviewed by Ken Early in The Irish Times this Saturday. He has lived in Brazil for 17 years and his journalism has appeared in The Irish Times, The New York Times, The Guardian, The Economist, Esquire and GQ among others