Ronan Fanning: Why is Éamon de Valera so unpopular on both sides of the Irish Sea?

Ronan Fanning, author of Éamon de Valera: A Will to Power, reflects on what the critical response to it tells us about attitudes to Dev both at home and in Britain 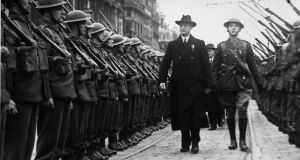 Eamon de Valera inspects troops outside the GPO in Dublin on the 25th anniversary of the 1916 Easter Rising: The English have an innate distaste for de Valera because he personifies an independent Irish national identity, claims historian Ronan Fanning. Photograph: Keystone/Getty Images

The purpose of Éamon de Valera: A Will to Power is to seek to reconcile a recognition of the catastrophic consequences of de Valera’s petulant rejection of the Anglo-Irish Treaty in 1921-22 with an acknowledgement of that remarkable understanding of state power and foreign policy in 1932-45 that identified him as the man who created a sovereign, independent Irish state. Although it also recognised that de Valera was the most divisive figure in 20th-century Irish history, the reception of the book since its publication a month ago has shown that, despite the passage of a hundred years since the Irish revolution, I underestimated his enduring unpopularity.

But the roots of that unpopularity in Britain – or, more precisely, in England – are quite different from the roots of his unpopularity in Ireland. The English have an innate distaste for de Valera because he personifies an independent Irish national identity, just as they have in innate distaste for de Gaulle (who personifies Free France and the rejection of Anglo-American hegemony) and for Franco and Salazar. Nor is it coincidental that an unapologetically Catholic ethos was then an integral component of the Irish, Spanish and Portuguese states: anti-Catholicism, more frequently covert than overt, is never far beneath the surface of the British view of Europe.

Inveterate English dislike of de Valera was encapsulated in the headlines over the review in the Sunday Times. “Too big for his boots. Hugely egotistical, de Valera believed in two things: nationalism and his own infallibility.” But it was Roy Foster, in a generous and penetrating review in the Spectator, who most elegantly captured this aspect of de Valera when he suggested that the title of one of Anthony Trollope’s novels would have well served as a title for this biography: He Knew He Was Right. That de Valera, in a phrase from the Sunday Times review, was “driven, humourless, arrogant and ascetic” is indisputable. But such self-belief is commonly characteristic of revolutionary leaders seeking to change the course of history.

Another reason why de Valera has always had such a persistently bad press in Britain is because he is so signally fails to fit their stage-Irish stereotype: rumbustious, fun-loving, hard drinking, colourful and larger than life – an image which the British could readily pin on Michael Collins, for example, during the Treaty negotiations but which never fitted the austere and pedantic de Valera. But for his more educated and well-informed British critics the gravest charge against him was his identification with Irish neutrality in the second World War.

The ramifications of Irish independence and its nomenclature, whether independent Ireland was described as the Irish Free State or as a republic externally associated with the British Commonwealth, mattered little to British governments between 1922 and 1938 (when the British transferred the ports that they had retained under a defence annex to the Treaty to Irish control in order to achieve the lowest common denominator of Ireland’s benign neutrality in the coming war). That was the theory but British attitudes in general – and Churchill’s in particular – understandably hardened in practice when de Valera denied the British the use of the ports during the second World War. The persistence of British contempt was well expressed in Nicholas Monsarrat’s bestselling novel, The Cruel Sea, published in 1951: “the cost, in men and ships, added months to the struggle, and ran up a score which Irish eyes a-smiling on the day of Allied victory was not going to cancel”. Contempt was compounded by de Valera’s pedantically grotesque error of judgement when he called at the home of the German envoy to Ireland to offer his condolences on the death of Hitler. That resentment among those old enough to remember the second World War lingers until the present day.

The reasons why de Valera remains so unpopular in Ireland are quite different. Many of them are rooted in his culpability for the Civil War. When Brian Cowen launched the book on October 19th, he argued that the time had come for all political parties to take an ecumenical and dispassionate view of the events of 19 21-22. For some of the Irish reviewers that time, clearly, is not yet.

But the more intriguing causes of de Valera’s present-day unpopularity in Ireland have to do with the discomfort of the younger generation with the Irish State of which he was the pre-eminent founding father. This generation takes for granted sovereignty and the achievement of Irish independence. It also takes for granted the fact that Ireland, uniquely among the European states that achieved independence in the aftermath of the first World War, is the outstanding example of the triumph of democracy and of the stability that flows there from. Although more than half a century has elapsed since de Valera was head of government and it is over 40 years since he stood down as head of state, he still stands indicted for the residual legacy of the socially and economically backward Ireland of the 1950s. He gets no credit for what he did but stands condemned for what he never tried to do.

Yet without de Valera, as I have written in the conclusion to the book, Ireland would never have achieved unfettered independence so quickly and “certainly would not have achieved it before the second World War, the only international crisis that has so far threatened to overwhelm the independence of the state”. Nor does the present generation of pundits give him credit for having thereby spared Ireland “further decades of corrosive and sterile debate on the pros and cons of the British connection” or recognise that it was thanks to de Valera that, by 1972, the Irish people were so self-confident about their own sovereignty that they voted so decisively in favour of diluting that sovereignty by joining Europe.

Sometimes the motives of de Valera’s latter-day critics are more overtly political; Eoin Ó Broin’s review in the Sunday Business Post is an obvious case in point. Ó Broin is a Sinn Féin councillor who is also among the party’s most able intellectuals with a number of books to his credit. The titles of two of them tell us as much as we need to know about his point of departure: Sinn Féin and the Politics of Left Republicanism and A Better Ireland: Arguments for a New Republic. “Do we really need another biography of Eamon de Valera?,” he begins by asking. He is at least smart enough to surmise that my intention was to “provide a certain clarity of analysis” albeit that he unsurprisingly finds that analysis unpersuasive.

Why unsurprising? Because on the eve of an election in which Sinn Féin nurtured what now seems the increasingly unrealistic hope of displacing Fianna Fáil as the main opposition party, the last thing they want is a book that might provoke an analysis of de Valera’s achievement and of the role that Fianna Fáil can continue to play in Irish politics.

Ronan Fanning, professor emeritus of modern history at University College, Dublinis, is author of Éamon de Valera: A Will to Power (Faber, £20)