Review: Hallelujah, by Jonathan Bardon – another handle on Handel 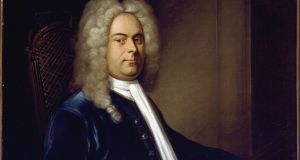 Handel’s Messiah should be understood as a massive attack on a native Irish speaker from Donegal called Seán Ó Tuathaláin. This delightful proposition emerges from Jonathan Bardon’s sparkling new study of the oratorio, which premiered in Dublin in 1742. Half a century earlier, Ó Tuathaláin, better known as the pantheistical philosopher John Toland, had published his first book, bluntly entitled Christianity Not Mysterious. Almost immediately, as Bardon says, it “became the handbook of deism, sending shock waves reverberating down the decades”. Robespierre, for instance, was deeply influenced by the Donegal man’s revolutionary scepticism, as was, for opposite reasons, William Blake – would the poet have asked “Was Jesus chaste” without Toland?

Rejection of the thesis that religion, and by extension reality, is not magical still charges through politics and the arts like a bolt of electricity. Patrick Kavanagh and Seamus Heaney, for example, belong among the believers in the miraculous, but even those who don’t, like Francis Bacon and Samuel Beckett, pitch their camp in the latrines of the mystery.

Contemporary reaction to Toland’s book was violent: members of the Irish parliament voted that he be burned at the stake. By the time the Messiah came to be written the wished-for flames were, if anything, rising higher. Handel himself, though a fervent believer, was not a fire-raiser, but his librettist, Charles Jennens, was flinty enough to strike sparks off flesh. Even his close friend Handel wasn’t spared: his head, Jennens said, was “full of maggots”.

As the heir to a large fortune Jennens could afford to be “uninterested in fame”. Fame, though, should be more interested in him than it has been. As far as meaning goes, the Messiah is his work rather than Handel’s – the music, after all, says nothing. The text of the oratorio, which Bardon usefully supplies as an appendix with chapter and verse references, is often read as a ragbag of quotations from the Bible. Actually, Jennens was a fusspot of genius, and he was so convinced that he and the Deity were on the same page that he cut up and radically rearranged the Word of God to suit his own agenda. The result is pugnaciously ideological. While the nuances of Jennens’s fanatically monarchical Protestantism are now hard to grasp – as a “non-juror” he refused to take an oath of loyalty to the Protestant king – it is transformative to realise that when we stand up for the Hallelujah Chorus we are not so much affirming the Creator as celebrating the immolation of Toland and other “notorious infidels”.

But political theology is a secondary theme in Bardon’s book. Most of his attention is devoted to social history. Some of the history was hidden from Handel. He had been invited to Dublin to help get poor people out of jail, but before his arrival, in November 1741, he may not have been aware of the horrors of some debtors’ prisons – inmates unwilling to pay the entrance fee were stripped naked and plunged in excrement until they coughed up. However, by the time of his departure, 10 months later, Handel knew that his music had raised the equivalent of €77,000 and freed hundreds of prisoners.

Actually, the money was peanuts and Dublin’s penury was trivial. The real problem in Ireland was hunger. In 1741 famine and fever may have killed as many as 480,000 people, a fifth of the population. No wonder Irish speakers dubbed 1741 “Bliain an Áir”, the Year of the Slaughter.

Handel himself didn’t go hungry. Nor did the ruling class: at banquets in his St Stephen’s Green house the lord chancellor, Robert Jocelyn, served up delicacies such as “Puffins in pickle” and “Badger Flambe with Colleflower”. It is likely that the “Paraletic stroke” Handel suffered in Dublin was brought on by overeating. Three doctors treated him on the spot and, according to a witness, “he was soon perfectly recovered”, though he remained ever afterwards “very apprehensive”, understandably so considering the cure consisted of “violent bleedings & other evacuations”.

Dinner in a drawer

Bardon writes illuminatingly about the musicians who took part in the premiere. The most sympathetic of them was Susannah Cibber, a devout Catholic recently involved in a sensational criminal conversation case brought by Theophilus, her monstrous husband. A peeping Tom witness who described in lascivious detail what he had seen Susannah doing with her lover, William Sloper, was halted by the judge shouting “Enough!” It was too late: the newspapers were full of the juicy bits, and Dublin was agog to see her. But, according to the contemporary musicologist Charles Burney, Susannah was musically illiterate and had a voice as thin as a thread. All the same, when she sang the aria He Was Despised the Rev Dr Patrick Delany leaped to his feet and cried out, “Woman, for this, be all thy sins forgiven!”

When choristers from the cathedral appeared to defy his order not to sing in what he contemptuously referred to as “the ‘Club of Fiddlers’ in Fishamble Street”, Swift hysterically denounced “the flagitious aggravation of [their] respective disobedience, rebellion, perfidy, and ingratitude”. How the dispute was resolved we don’t know. But one way or another the dean was overruled, a decision that Bardon says marked the end of his reign as the “absolute lord” of St Patrick’s. It didn’t, however, prevent Handel from visiting the dean on his deathbed. According to Laetitia Pilkington, whom Swift loved to pinch till she was black and blue, the visit occasioned “the last sensible Words he ever uttered”: “Oh! A German, and a Genius! A Prodigy! Admit him.”

That neither Handel nor the Messiah is referred to in the excellent and capacious recent biography of Swift by Leo Damrosch is an indication of the thoroughness of Bardon’s researches. He is also thoroughly interesting on the current status of the oratorio in Ireland, not least the irony of the popularity of this most Protestant piece of music being due to Our Lady’s Choral Society, founded by that most Catholic of prelates, John Charles McQuaid.

George Bernard Shaw, a Tolandite if ever there was one, was scathing about the “multitudinous dullness” that characterised performances of the Messiah in his day. Audiences, he said, had been “broken into the custom of singing Handel as if he meant nothing”. Bardon relates the custom to the gigantism that has both boosted and stunted the reputation of the oratorio. Handel’s Dublin forces were small – he had, for example, only one trumpeter. By contrast there were 250 musicians in the orchestra and 257 singers in the choir for a performance in Westminster Abbey in 1784. During their rendition of I Know My Redeemer Liveth, tears were observed trickling down the “venerable cheeks” of a distinguished visual artist in the audience, Mrs Mary Delany. By then her beloved husband had gone to his Redeemer and left her free to go out on her own.

Toland got it wrong: Christianity has always been mysterious.

Brian Lynch is a member of Aosdána. His website is brianlynch.org