Redmond: a Life Undone by Chris Dooley - a story of the man time almost forgot 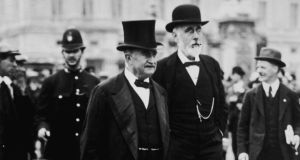 The most controversial figure to date in this ‘Decade of Centenaries’ has been John Redmond and the role he played, or might have played in Irish history. This latest book on Redmond doesn’t seek to enter the ranks of controversy; and it is not a biography, but covers his political career during those critical years from 1910 to his death in 1918.

After the general elections of 1910 the Irish Parliamentary Party found itself (as in 1886 under Parnell) holding the balance between the Liberals and the Tories. In order to stay in office and to get Lloyd George’s reform budget through parliament the Liberal government needed the support of the Irish Party. The Irish bargained their support for the budget and for the removal of the House of Lords’ veto in return for a Home Rule Bill.

So far Redmond had played his cards well, and a Home Rule Bill was introduced in April 1912. The problem soon emerging, however, was that none of prime minister Asquith’s cabinet had anything like the missionary or principled commitment to home rule that Gladstone had; and no one in the leadership of the Irish Parliamentary Party had the charisma and political skill of Parnell. Meanwhile, Unionist opposition had grown in strength, organisation and leadership since 1886.

The Home Rule Bill introduced by Asquith in 1912 was intended to operate over all of Ireland.

Faced with the intransigence and unconstitutional defiance of Bonar Law, leader of the Tories, and Carson, leader of the Irish unionists, members of the cabinet soon began to propose that Ulster counties be given the option of voting themselves out of Home Rule. And though Asquith stood publicly by his Bill to apply to all of Ireland, privately he wrote to George V that special treatment for Ulster might have to be considered at a later date.

The slippage had begun. Between 1912 and 1914 various proposals were made as to whether nine or four or six counties might be excluded; and if excluded, should it be for a specified number of years or should the exclusion be permanent? In this unfolding and bitterly fought drama, Redmond and Carson held the centre of the stage with the faint-hearted Liberals in Redmond’s supporting cast, and the Tories in Carson’s.

As the story developed, the antagonists were forced from their original positions, and both Redmond and Carson were to be hugely disappointed with an outcome that neither had wanted.

Redmond: A Life Undone, is based largely on his speeches in parliament, reports in the newspapers, and private correspondence. There are no footnotes, but the sources used are usually evident within the text. Another feature is that it is written in the present tense.

History, narrated in the present tense, has become popular with some historians presenting programmes on television. It has to be admitted that this method has its advantages. As in this present book, it can offer a three-dimensional quality bringing the reader right into the heart of the action being described.

It provides a vivid portrayal of events between 1910 and 1918 as they appeared to Redmond and how he reacted to them. This method comes, perhaps, as second nature to the author of this book, Chris Dooley, who is Foreign Editor of The Irish Times.

The present tense method in history, however, also has its dangers or limitations. It can lead more easily to our own prejudices or biases becoming trapped into the narrative. And the treatment of history as current affairs surrenders its hold on historical perspective and analysis.

That said, one can certainly agree with the publisher’s claim that this book is “dramatic and immersive”.

The much more doubtful claim that it is “a provocative reassessment of one of Ireland’s most brilliant political minds” is no more than publisher’s sales-talk.

The author himself makes no such exaggerated claim. Indeed, his book is not concerned with challenging any of the verdicts passed on Redmond’s career by previous writers.

With the introduction of the Home Rule Bill of 1912, Redmond’s popularity in nationalist Ireland had reached its zenith. If that Bill had passed as intended he might well have been placed in Irish memory as one of our most accomplished politicians and one of our greatest ever leaders.

Now apparently in a commanding position, he was not, as Nicholas Mansergh once observed, a commanding personality. Although chairman of the party, he was never accepted as was his predecessor, Parnell, as the inspired “leader of the Irish race at home and abroad”.

His whole political world was focused on the imperial parliament in Westminster, and both he and his party underestimated or lost touch with the political and cultural developments in nationalism back home. When Home Rule faltered and began to disappear, Redmond and his party were overwhelmed by the great events taking place between 1912 and 1918.

Once the slippage began, the pace downhill was speedy, tragic and fatal. He lost control over all that was happening – the failure of all the attempted compromises; militant developments in the North and the South; the outbreak of the first World War; the Easter Rising followed by executions and martial law. He lost face and became a victim of these circumstances.

In one of the saddest admissions of political failure, Redmond, after almost 40 years in parliament, declared in the House of Commons: “The life of a politician, especially an Irish politician, is one long series of postponements and compromises and disappointments and disillusions.”

Condolence
When he died in March 1918, a requiem Mass was held for him in Westminster Cathedral. The attendance included Lloyd George, Bonar Law and Carson. No requiem was held for him in Dublin, although one had been held for his brother, Willie, killed in action in Flanders nine months earlier. Nor did Archbishop Walsh send a message of condolence.

It was an indication of how low Redmond’s popularity had fallen in nationalist Ireland since the great welcome he had received in Dublin in 1912. Some would also see huge significance in the fact that he had been honoured in Westminster and not in Dublin.

It was a tragically sad ending for one who was devoted to the Irish constitutional tradition.

Some tardy acknowledgement of his 40-year service on behalf of his country was offered during Wexford’s centenary celebrations of his birth. On that occasion in 1956, Eamon de Valera said that although he had not changed his views on his differences with Redmond, he was happy to play his part “in doing honour to a great Wexford man to whom we are quite ready to give credit for having worked unselfishly according to his views for the welfare of his country”.

What Redmond had attempted for Ireland is outlined in his own words in this engaging book.