Shortlisted this week for the Baileys Women’s Prize for Fiction, Audrey Magee’s ‘The Undertaking’ has the second World War as its backdrop. Here’s a selection of our favourite literary quotations on war 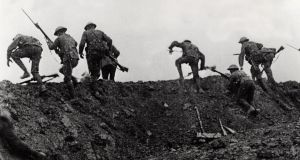 The first day of the Battle of the Somme, July 1st, 1916. Photograph: The Art Archive / Imperial War Museum

“You can always tell an old soldier by the inside of his holsters and cartridge boxes. The young ones carry pistols and cartridges; the old ones, grub.”

“ ‘My country, right or wrong,’ is a thing that no patriot would think of saying except in a desperate case. It is like saying, ‘My mother, drunk or sober.’”

“If you could hear, at every jolt, the blood

Come gargling from the froth-corrupted lungs,

Obscene as cancer, bitter as the cud

My friend, you would not tell with such high zest

To children ardent for some desperate glory,

“Dictators are as scared of books as they are of cannon.”

“An author’s first duty is to let down his country.”

“No one won the last war, and no one will win the next war.”

“War is capitalism with the gloves off and many who go to war know it but they go to war because they don’t want to be a hero.”

“The corporate revolution will collapse if we refuse to buy what they are selling – their ideas, their version of history, their wars, their weapons, their notion of inevitability. Remember this: We be many and they be few. They need us more than we need them. Another world is not only possible, she is on her way. On a quiet day, I can hear her breathing.”