Powerful novels get under the skin of the crime thriller 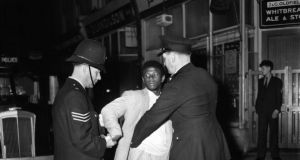 T he Double (Orion, €19.99) is the second novel from George Pelecanos to feature Spero Lucas, a veteran of the Iraq war now operating as a private investigator in Washington. Approached by a woman who has been scammed out of a valuable painting, Lucas takes the job, only to find himself quickly embroiled in a situation in which brutal violence offers the only exit strategy.

An award-winning writer on the TV shows The Wire and Treme , among others, Pelecanos has been writing crime novels concerned with the effects of social and cultural conditioning since he debuted, with A Firing Offence , in 1992.

As was the case with the first Spero Lucas novel, The Cut (2011), Pelecanos here turns the spotlight on his hero, the stripped-back, hardboiled prose posing tough questions about Lucas’s own appetite for violence.

There are strong echoes of Dashiell Hammett’s iconic private eye Sam Spade, more so than Raymond Chandler’s Philip Marlowe or Ross Macdonald’s Lew Archer, in that we are not invited to like Lucas or to identify with his burning thirst for justice. Instead readers are required to interrogate their own attitude to violence (real or fictional) and deadly deeds done in the name of the greater good.

It’s a powerful tale, and one that confirms Pelecanos as one of the great American crime novelists.

Laura Wilson’s The Riot (Quercus, €18.75) is the fifth of her novels to feature DI Ted Stratton, and her 11th novel in total. The story opens in Notting Hill, in London, in 1958, with Stratton investigating the murder of a rent collector.

Stratton is a phlegmatic, old-fashioned English copper, but in his new manor of Notting Hill he finds a world that is unrecognisable. Peopled with thieves, prostitutes, wideboys and pimps, the area has become a battleground where indigenous Londoners repeatedly clash with the Jewish and Caribbean immigrants arriving to make Britain their home.

The police-procedural aspect of the novel is deftly handled, and Stratton makes for a likeably self-deprecating guide as he leads us through the rundown warren of 1950s Notting Hill, but the most fascinating aspect of the story is Wilson’s vivid re-creation of the atmosphere of the time and place, as London sparks and flares in the run-up to the race riots that would change the face of Britain for decades to come.

As is the case with The Riot , Margie Orford’s Water Music (Head of Zeus, €18.75) is fascinated with the way cultural and political pressures affect criminal behaviour. Here the setting is contemporary South Africa, as Clare Hart, a profiler who specialises in cases relating to missing children, tries to discover who abandoned a young child to die on the side of a mountain above Cape Town.

Operating on meagre resources, and harassed by politicians determined to maintain the fiction of a healthy democracy (even as striking miners are gunned down by agents of the state), Hart finds herself investigating a bizarre abduction that reflects the bigger picture of South Africa’s callous treatment of a generation of young men and women.

Orford has a rare ability to get under the skin of the genre’s conventions, and there are times when her depictions of abuse and neglect are horrifying. Fairy tales are referenced throughout, in the process reminding us of the justice that crime fiction generally delivers, but Water Music is a novel that has much more in common with the disturbing tales of Charles Perrault than it does with fables of happy-ever-after.

Liz Nugent’s Unravelling Oliver (Penguin Ireland, €14.99) opens with Oliver Ryan, a Dublin-based writer, viciously beating his wife, Alice. The assault is described in the first person by Oliver himself, but Oliver’s is only one of a number of first-person accounts on offer here, each one a piece of the jigsaw that gradually assembles itself into a portrait of a pathetic young boy who grew up to become a monster who writes bestselling children’s books.

The reader is given no framing device relating to who might have collated the various accounts, or why, but the narrative gambit pays off handsomely. Oliver Ryan may be a vain, shallow and ultimately violent sociopath, but his story grows more compelling and nuanced the more we learn about him and the factors that influenced the man he would become, some of which were set in train even before he was born. More an investigation into psychology than a conventional crime thriller, Unravelling Oliver is a formidable debut.

Set in the small Israeli city of Holon, on the outskirts of Tel Aviv, The Missing File (Quercus, €11.50) by the first-time author DA Mishani, begins with the mother of a young boy reporting his disappearance to Insp Avraham Avraham. Perplexed but initially unconcerned – children are never kidnapped or killed in Israel, Avraham tells us – the inspector only belatedly swings into action, by which time the reader has already encountered the boy’s sinister neighbour, Ze’ev, an English teacher and frustrated author who craves the inspiration that will spark his writing to life.

Mishani is a crime writer and scholar in his native Israel, and here he blends a subversive take on the standard police procedural with ruminations on the crime novel itself, cross-referencing the work of Agatha Christie and Stieg Larsson with that of Kafka and Dostoevsky, and advancing Avraham’s theory about why there are no detective novels in Hebrew.

The well-meaning but hapless Avraham is a delightful creation, particularly as Steven Cohen’s translation is strewn with Avraham’s humorously morose observations on the human condition. With its finely crafted plot constantly confounding expectations, The Missing File marks DA Mishani out as a writer to watch.

Declan Burke is a journalist and author. Crime Always Pays , his latest novel, is out this month.