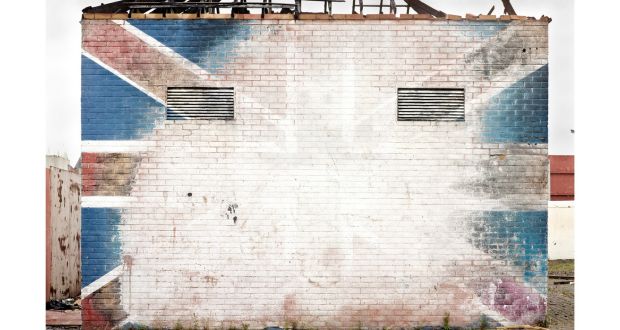 One of Paul Seawright’s desolate portraits of the urban fringe

For those who lived in the dark valley of the North during the Troubles, the light of the past is indistinct. Flickers of memory illuminate places otherwise entirely unremarkable: the back bar of Lavery’s, the art school on a Saturday afternoon, raucous with punks, the terraced house where the punch of gunfire shot through Jimi Hendrix’s soft meanders, sharp like a jump in the record.

These old haunts, as Declan Long describes them in the ghostly panoramas of the artist Willie Doherty, are sites unseen in the new North, all glass and verticality, as Belfast, sadly, has become. Ghost-Haunted Land, Long’s book on contemporary art and the north of Ireland, is an exploration of a damaged landscape and its representation in photography, film, sculpture and other media. It is that rare thing, an intellectually provocative and humanely engaging book, if at times a little deeply embedded in its own, particular language.

A step forward in the evolution of writing about the North, it confirms the deep richness of artistic practice in Belfast, Derry and their environs, as expressed in Source, which is one of the great contemporary photographic journals anywhere, and the Vacuum, whose offbeat sedition possessed a rude genius entirely fitting as a rebuke to the conceits of its own place and time.

Ghost-Haunted Land illuminates a spectrum of visual reflection on the North and its troubled histories, which gives the reader a context for a diverse range of practices from Paul Seawright’s desolate portraits of the urban fringe, through Una Walker’s deconstruction of art history in Surveiller, to Colin Davidson’s series of portraits of the relatives of victims of violence, Silent Testimony. Seawright, Walker and Davidson are all artists of the aftermath, Seawright’s photographs as delicate as a watercolour in their faded tones, Walker’s installation an uncomfortable model of observation, Davidson’s paintings a glimmering reflection of the heavy colours in which grief is drawn.

These locatable works are entry points to Long’s discussion of the many other forms in which art of the North has engaged with memory and forgetting. Particularly good is the section on The Nature of Things, which was a group exhibition of northern art at the Venice Biennale in 2005 that featured Aisling O’Beirn’s Stories for Venetians and Tourists. More an intervention than an installation, O’Beirn printed fragments of Belfast folk-stories onto bags of pigeon food sold to tourists in the Piazza San Marco. The absurdity catches something of both cities’ histories of maritime and mercantile opportunity, and there is another book to be written on the flamboyancy of these troubled connections in art and literature. Such networks surface briefly in the mention of Susan McWilliams’s occult film, F-L-A-M-M-A-R-I-O-N, which was exhibited in Venice in 2009 and which Long reads as evidence of a movement away from the restrictions of grounded post-Troubles themes. This needs more thinking, in particular given Ciaran Carson’s apparition in the film, Carson the master magician of Belfast’s global history in The Star Factory and The Ballad of HMS Belfast, all braggadocio and kif.

Long’s book is a study in the art of comparison. If one condition of survival can be a dissociation from the subject’s immediate time and place, Long pays careful attention to those moments of transit to other times and places that these works of art so frequently represent. Ghost-Haunted Land is a book in motion, however much its subjects are meant to be stuck in place. After all, the North is the province of silence, where whatever you say, you say nothing. Except that, as Long argues, visual art represents the otherwise inexpressible, creating narratives by suggestive associations that, in a fractured society, becomes their own kind of community. This little republic of the unsaid is Long’s subject and he captures it in all its eccentric diversity, from wheelie bins on a Venetian party boat to the heatwave that destroyed the gloomy Belfast backdrop for the visiting shoot of Harry’s Game. This is a society of multiple perspectives, such as Willie Doherty has created in his film and photography, an art that undermines the authority of the single view. This speaks again to Long’s general preoccupation with the idea of an art in motion, whether as objects of circulation or of acquisition, and its attendant sensations, of displacement, of melancholy and of apparition. These are entrances to a northern sublime, such as in Doherty’s photograph, Show of Strength I, with its play of depth and distance, as Long describes it, and its “captivating chromatic intensity”. A panel of deepest blue punctured by a telegraph pole and its parasite, a wooden flag mast, the image is revolutionary in its symbolic reconfiguration, the void overwhelming the sign. The aesthetic of bleakness is fundamental to this art practice and visible elsewhere in John Duncan’s eerie photographs from the Bonfire series, each of which is a vision of the netherworld found somewhere between the unconscious and the Newtonards Road.

Ghost-Haunted Land is a foundational work of art criticism that will stand alongside Colin Graham’s study of photography and the North as a first point of reference for anyone interested in the Troubles and their cultural legacies. The book’s sensory system was generated by visual art critics like Maeve Connolly, Vicky Bell and Aidan Dunne, in newspapers, journals and catalogues, all makers of a network of interest across the island of Ireland. Its bones were set in decades of cross-Border solidarity between institutions, some private, many public, like IMMA, the Gallery of Photography, Belfast Exposed, NCAD, the University of Ulster and the Kerlin Gallery, all of which found ways to engage with art and the North, often when others wanted to forget about both. If there is hope for the future it persists in the reality of these human connections, which found political form in the commitments made in the Good Friday agreement, an accord to which we must return our attention in face of our neighbours’ late outbreak of careless disregard, otherwise known as Brexit.
Nicholas Allen’s latest book is ‘Coastal Works: Cultures of the Atlantic Edge’ (OUP, 2017), which he edited with Nick Groom and Jos Smith