Poetry across the linguistic divide 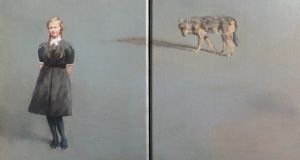 In May of this year Nuala Ní Dhomhnaill was awarded the Zbigniew Herbert International Literary Award 2018. This is an extremely prestigious award, recognising outstanding artistic and intellectual literary achievements.

At the time, Edward Hirsch, chairman of the panel of judges, declared: “We have chosen a ground-breaking and courageous poet who is both local and international, a poet who has helped to sustain and remake her language.” And it is true that Ní Dhomhnaill makes poetry that spans that divide. The neologism coined recently which attempts to take account of this is “glocal” (global plus local). She writes in one of Europe’s lesser-used languages; Barry McCrea in a recent volume, refers to them as “the languages of the night”. As a result her output in the “original version” is read by a minority. She acknowledged this herself when receiving the prize, admitting that the prize was important not just for her but also for the language itself.

The universality of Ní Dhomhnaill’s themes and the heft and thrust of her imagination are clearly visible in this new volume, Northern Lights (Gallery Press), her fourth bilingual collection.

It takes the form of a selected poems, almost a playlist of Ní Dhomhnaill favourites, and is published in celebration of her most recent achievement. The cover painting (The Dilemma by Diarmuid Breen) is bisected by a vertical line. The girl in the foreground could well be a young Ní Dhomhnaill, eyes half closed, stance like that of a performer, responding to the old Irish imperative “abair amhrán”. The phrase, literally “say a song”, shows the connection between the oral tradition and poetry in Ireland. The right-hand side of the painting portrays a menacing, lean and hungry, grey wolf. His bright focussed eyes are in sharp contrast to the ecstasy writ large on the young girl’s face. The metaphorical weight of the cover is clear. And yet, the English language translations in this volume, many of which have appeared elsewhere in other volumes, by five translators (Eiléan Ní Chuilleanáin, Peter Fallon, Eamonn Grennan, Bernard O’Donoghue and the late Dennis O’Driscoll) are not predatory. The translators are not the raiders mentioned by Seamus Heaney in his famous interview with Robert Hass. They are respectful, carrying Ní Dhomhnaill’s voices across the linguistic divide.

There are old favourites such as Dán do Mhelissa, one of her well-known Mermaid poems, and new poems. One of the most striking of these is the lament published for Heaney himself: In Memoriam Seamus Heaney. The central image Ní Dhomhnaill uses (“Faoi mar a thiteadh crann mór”) is that of a tree felled in the forest. It echoes Heaney’s own poem, Clearances, VIII, where his mother’s loss is related via the felling of a chestnut tree. Ní Dhomnaill’s poem also refers to Caoineadh Airt Uí Laoighre, the great keening lament of Eibhlín Dubh Ní Chonaill for her dead husband, and she weaves in that wonderful aisling poem Sé mo laoch mo ghile mear by Seán Clárach Ó Domhnaill, when she says “Dob é ár buachaill beo é,/ ár nGile Mear, ár rogha, ár bpíobaire”, and of course she refers to Cill Chais, and the loss of our native forest, making a shroud for Heaney from all the threads of our national tradition.

Ní Dhomhnaill was one of a generation of poets known as the Innti poets (after the journal they were published in), most of whom attended University College Cork at the end of the 1960s, early 1970s. Their poetry was nurtured and flourished under the tutelage of Seán Ó Tuama, the genial professor of Modern Irish, himself a poet and playwright. One of Ní Dhomhnaill’s cohort is the poet Gabriel Rosenstock, a prolific translator and a haïkuist, whose poems draw their inspiration from an impressive number of international sources.

In The Loneliness of the Sasquatch: from the Irish of Gabriel Rosenstock (Alba Publishing), Amanda Bell offers a re-appropriation of Rosenstock’s work with poems that riff on Rosenstock’s original work. The question and answer session that follows the poems offers a fascinating insight into the translational and “transcreational” practices of both poets. The exchange gives voice to the debates raging in the worlds of translation studies and creative writing.

The conflict lies between a university system, which attempts to police creativity and impose norms, and the untrammelled spirit of poet-creators. It is no accident, for example, that translation studies is part of the School of Creative Writing at the University of East Anglia and that the French university system continues to frown on the creative dimension in a PhD thesis, because by what yardstick can one measure creativity? What standards can one use to judge how successfully the “brindled cats are eating the nightingale’s tongue” (to use an image from Gerry Murphy’s poem Translation and its Discontents). When creativity is added to the mix, égalité goes out the window, as any evaluation of creativity necessarily includes the subjective viewpoint of the evaluator.

As such, straight respectful translations are much easier to deal with than the fetches, versions, and transmogrifications which are revelled in by Rosenstock and Bell.

Doireann Ní Ghríofa’s latest volume, Lies (Dedalus Press), also contributes to this debate. Ní Ghríofa is a bilingual poet. An extremely accomplished English language volume of her work, Clasp, was published by Dedalus in 2015, and she has just been awarded a Lannan Fellowship, adding to the list of accolades already bestowed on her. Lies take its cue from a chapbook, Dordeán, do Chroí/ A Hummingbird, your Heart (Smithereens Press, 2014), also a bilingual volume where the poems were translated by Ní Ghríofa. The practice of self-translation by bilingual people is one that is mostly avoided by the poets themselves, they prefer to be translated by others. This is the case for example with the work of the late great Liam Ó Muirthile. His collected poems, for instance, were translated by Gabriel Rosenstock. For if a poet-translator can be suspected of being predatorial, can be envisaged, as Heaney suggested, as a marauding Viking, one can understand why the process of self-translation might be problematic. And of course, when one adds the David-and-Goliath world language versus minority language to the mix, the issue becomes even more fraught.

Yet, it is from this very conflict that Ní Ghríofa draws her inspiration. We see a hint of it in her poem A Jaw, Ajar (available online) where the poem emerges from the friction between the languages she speaks. The poem reaches back to Ní Ghríofa’s anatomical training in her student days in UCC. And it is in the response to the professor’s question (“This is the mandible// What would you call that in Gaelic?) that the poem itself emerges fully formed, from the bone of the mandible and the distance between the anatomical term for the bone, corrán géill, and the Irish expression for shamming or pretending, cur i gcéill. This is why Ní Ghríofa manages to “other” herself perfectly in translation, because there is no sense of alienation, no feeling that she has to preserve the minority language from the encroaching world-language wolf. Perhaps this is so because she comes from a new generation, where the Irish language is not associated with obligation or oppression. She probably sees it, not just as a remainder, or a trace of our old-fashioned isolationist life on our small rocky island off the coast of Europe, but as one of the elements that distinguishes us and sets us apart from our anglophone neighbours, who loom to the right and left of us.

The poems, which deal with everything from dishwashers to peeling potatoes, to the removal of a tattoo, reveal not just that all these subjects are worthy material for poems but that all of these subjects can be dealt with in Irish.

Poetry occupies a special place on the island of Ireland. It accommodates new arrivals (witness the new anthology of migrant poetry edited by Paul Casey), older traditions, linguistic variation, transcreational practice. Its importance is recognised in the pages of our passport, where we travel in the company of Ní Dhomhnaill, WB Yeats and the Rhyming Weaver poet, James Orr. With Ní Ghríofa’s poetry we feel that the tradition has a secure future, no matter which language she chooses to write in.

Clíona Ní Ríordáin is professor of English at the Sorbonne Nouvelle-Paris 3 where she teaches translation studies and convenes the master’s degree in Irish Studies. Her most recent publication is Jeune Poésie d’Irlande (2015) co-edited and translated with Paul Bensimon