Plenty for children to enjoy and admire in re-issued classics 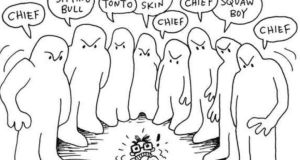 Although first published only eight years ago, Sherman Alexie’s ‘The Absolutely True Diary of a Part-Time Indian’ has already gained iconic status

The children’s books arriving for review in a column such as this may be divided into two categories: those which are new or recent publications and those which, by way of general classification, may be referred to as reissues.

Our focus tends to be on the former category, so by way of balance the emphasis today is on some of the titles which have returned to publishers’ lists. A new generation of young readers will now have access to these editions, many of which are often very attractively produced and packaged.

Few picture book heroes are more immediately endearing than Frog, the delightful amphibian created by Dutch artist and illustrator Max Velthuijs. Marking the 25th anniversary of its first English language appearance, his Frog in Love (Andersen Press, £6.99), translated by Anthea Bell, is a tender and touching story of a search for love. Words and pictures share an apparent simplicity which does not, however, diminish either their subtle humour or their strong emotional appeal. “Love,” the concluding line reminds us, “knows no boundaries.” The point has been entertainingly made.

Several of these reissues have, as a welcome bonus, an introduction or an appendix giving useful insights into the background of the work concerned. Such is the case with a new edition of ETA Hoffmann’s The Nutcracker (Hesperus Minor, £7.99), where award-winning children’s and young-adult writer Kate Thompson places the famous story in its literary and historical context, commenting in particular on its “marvellous, often weird, multilayering of imaginative worlds”.

The translation dates from the mid 19th century but retains much of its original vigour and freshness, not least in its account of the battle between the Nutcracker, aided by young Maria, and the evil Mouse King.

Widely regarded as one of the classic collections of children’s poetry, Walter de la Mare’s Peacock Pie was first published in 1913 and has subsequently reappeared in a variety of formats. In its new manifestation (Faber & Faber, £6.99) it comes with the black-and-white illustrations provided for a 1946 edition by Edward Ardizzone, who catches the blend of real, imaginary and sometimes spooky worlds which typify de la Mare’s verses.

There are magical, if occasionally romanticised, landscapes here, populated by a wealth of mysterious characters, human and otherwise. But there is also a melancholy, a foreshadowing of those days ahead when “the music is lost and the words are gone”.

Ardizzone’s illustrations also figure in the reissue of Noel Langley’s 1937 novel The Land of Green Ginger (Faber & Faber, £6.99), an unparalleled farrago of nonsensical make-believe. The central character, Abu Ali, the prince son of Aladdin, finds himself on a quest to the fabled domain of the title, encountering en route – among much else – a talking mouse and the wonderfully named Boomalakka Wee. (Don’t ask!) The ingenuity of the wordplay skilfully reflects the plot’s mayhem and at times the tone (fortuitously or deliberately) is one of high camp. “It just gets more and more gay,” as the mouse comments in its 1937 innocence. “I can’t remember when I’ve laughed so hard. Hey-nonny-no”.

from 1935, The Flying Classroom dazzles with its perceptive depiction of schoolboys, schoolmasters and snowballing, of friendships and rivalries, of youthful joys and disappointments. Warmly recommended, as is The Parent Trap, which, two film versions notwithstanding, survives as an affectionately humorous portrayal of family life – especially if identical twins are involved. Bell’s translations, reinforced by the illustrations of Kästner’s collaborator, Walter Trier, succeed in maintaining the books’ period flavour.

If the children’s reissues emanating from various publishers were to be judged exclusively on their aesthetic appeal, then the titles which have appeared regularly since 1999 as part of New York Review Books’ Children’s Collection would easily win the highest commendation.

With their handsome and durable hardback covers and their elegant design these volumes are immediately appealing to the eye and would form the basis for an extensive and enviable library of international children’s literature.

The most recent addition to the collection is Jean Morrell’s 1964 novel The Pushcart War (NYR, £9.99), an inventive, satirical story of how the “ordinary” man and woman in the street (literally there, in this case) can successfully confront the forces of misguided power and authority.

Although first published only eight years ago, Sherman Alexie’s The Absolutely True Diary of a Part-Time Indian is already renowned in the world of young-adult literature – to the extent of its being banned in some US schools and libraries. A new edition (Andersen Press, £7.99) comes with various extras, including a foreword by Markus Zusak and question-and-answer exchanges with Alexie and its illustrator, Ellen Forney.

Its story of a Native American teenager, Arnold Spirit, and his move between his two very differing schools, related in the boy’s idiosyncratic and free-flowing idiom, is as painful, pungent and provocative as it was first time round. Robert Dunbar is a commentator on children’s books