Peter O’Neill on And Agamemnon Dead, an alternative collection of Irish poetry 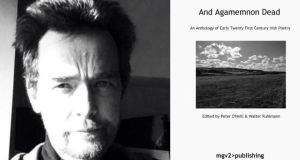 Peter O’Neill: “If you look around you in the news, in the newspapers, on the internet, violence and destruction are everywhere. And yet, is any of it being reflected back in contemporary poetry in this country? This is one of the issues which And Agamemnon Dead addresses”

Walter Ruhlmann and I first met on Facebook, as is so often the case with meetings these days. It was a typical Sunday afternoon and I had been scrolling down through my page when a post by Walter caught my eye. He was advertising one of his poetry collections, which principally dealt with the death of his father. I remember posting my condolences, and from there we started chatting.

We stayed in contact and when Walter wanted to put an anthology of Irish poetry together for his publishing house, mgv2>publishing, which he has been running for almost 20 years, and proposed that I co-edit it with him, I jumped at the opportunity.

The response from writers here in Ireland and abroad was phenomenal. After Walter had seen the first 100 pages, he just left me to it. He’s a very busy man, holding down a full-time teaching position in the town of Cluses in Haute-Savoie, as well as editing the literary magazine mgversion2>datura, and running mgv2>publishing in Le Reposoir, a small town between Geneva and Chamonix. His generosity and confidence in my abilities as an editor were hugely liberating.

Walter was familiar with some of the writers already: Michael McAloran and Christine Murray, for example, whom he knew through their work in the online literary magazine Bone Orchard and from the monthly literary periodical A New Ulster, in which we were all appearing in together. Walter and I were both delighted to get exciting new writing from Christine and Michael early on, as they both helped to set the standard of the anthology.

One of the key themes of the anthology, and which the title signals, is violence. I think of a passage from Henry Miller’s Tropic of Cancer, written in the 1930s: “Only the killers seem to be extracting from life some satisfactory measure of what they are putting into it. The age demands violence, but we are getting only abortive explosions.” Those lines could equally apply to today. If you look around you in the news, in the newspapers, on the internet, violence and destruction are everywhere. And yet, is any of it being reflected back in contemporary poetry in this country? This is one of the issues which And Agamemnon Dead addresses.

The fact that there are two former soldiers included in the anthology – Michael J Whelan and Jack Grady – is no accident. Whelan’s short, tight, prose-like poems, recounting his experience as an Irish soldier on UN peacekeeping missions in Kosovo, for me are among the highlights of the book. Whelan’s voice is that of both witness and survivor and is unique in contemporary Irish poetry. I was delighted to be able to publish five of his poems in Agamemnon.

Dylan Brennan treats violent death related to the drug wars in Mexico, but perhaps more shockingly, he also addresses the violence committed by members of the Catholic Church to their fellow Christians in this country: see Bones of Anonymous Children.

Yet violence, like everything else, is multi-dimensional; there is emotional violence and physical violence, historic and collective. But there are other forms of violence treated in this book. The poet John Saunders treats, like Baudelaire, the violence brought on in the subject through alternate sudden shifts in perspective – see Journey.

Another aspect to the anthology is the fact that so many writer/editors appear: Amos Greig (A New Ulster), Arthur Broomfield (Outburst), Peadar O’Donoghue (Poetry Bus), Colm Kearns (The Runt), all bearing testimony to the renaissance that is ongoing in the poetry world here.

We are also very proud to have such a fantastic contribution from so many diverse women poets. Novelist Rosita Sweetman with Threnody for Caroline Walsh memorialising the tragic death and funeral for the Irish Times’ much-beloved literary editor, Caroline Walsh, is a highlight, as is Anamaria Crowe Serrano’s On Reading Stuart Kendall’s Gilgamesh. But the contributions by Irish-American poet Sarah Brown Weitzman and local Fingal poets Eithne Lannon and Maighread Medbh are equally compelling. The women poets show, interestingly, a perhaps more playful bent in exploring poetic forms and themes than their male counterparts.

Our hope, Walter and I, is that this anthology offers a good perspective into the poetry that is currently being written outside the mainstream publishing houses within the country, so as to encourage people who would normally never read the stuff to perhaps give it a second chance.

The anthology will be officially launched at Donkey Shots: Skerries First International Avant Garde Poetry Festival, to be held in Skerries on the May 23rd. I am indebted to Josephine Knight, the head librarian in Skerries, for supporting me in this project; local businessman Martin Scully, for giving us the use of Floraville (the new town park) for the day and for all the staff at Ardgillan Castle: in particular Tom Reilly, Cormack McCann, and Noleen O’Kane and to local Green Party representative Joe O’Brien, with whom I originally discussed the whole idea, and Kevin at The Gladstone and who was also so supportive.

There will be three events on the day kicking off in Ardgillan Castle at 11am, where local poets Eithne Lannon, Bob Shakeshaft and I will give readings, followed by readings in Floraville by Rosita Sweetman, Arthur Broomfield, Colm Kearns, Michael J Whelan and Kevin Higgins. Finally, the last series of readings will take place in The Gladstone Inn at 5.30pm with Christine Murray, Anamaria Crowe Serrano, Maighread Medbh, Peadar O’Donoghue, Paul Casey (O Bheal) and Jack Grady (Ox Mountain Poets). To conclude, I will be reading some poems from The Dark Pool, the second book to be launched on the day, also published by Mgv2>publishing.