Perceptions of the East – Yellow Peril: An Archive of Anti-Asian Fear

Review: fascination mixed with fear is how many in the West culturally construct the East 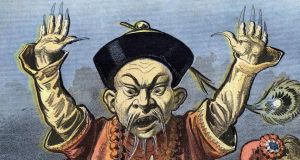 Apocalyptic pollution, “Asian” flu, unfettered economic growth, boot camps for internet addiction, hacker attacks on western businesses and governments:– there is no shortage of fascination mixed with fear directed towards the culturally constructed East. Yellow Peril! An Archive of Anti-Asian Fear distils and presents a collection of accounts, images and essays related to this fear.

The phrase yellow peril (sometimes yellow terror or yellow spectre), coined by Kaiser Wilhelm II of Germany, in the 1880s, after a dream in which he saw the Buddha riding a dragon threatening to invade Europe, blends western anxieties about sex, racist fears of the alien other, and the Spenglerian belief that the West will become outnumbered and enslaved by the East.

These fears became increasingly reinscribed as ideology through popular cultural products. In the late 19th century in Europe, the threat to imperialism drove the yellow-peril narrative, while in the United States it emerged predominantly as a response to social factors such as cheap “coolie” labour and increased immigration.

“Yellow peril”, which refers to the skin colour of east Asians, developed into a vague form of xenophobia that taps into the racist notion that “they all look the same” and extends beyond individual countries to encompass a whole continent and “colour” of peoples. But in a far-reaching and often enlightening analysis that reveals the very blurred lines of designation in this field, John Kuo Wei Tchen, one of the editors of this book, points out that the colour yellow was originally attributed to natives of India rather than to east Asians.

Tchen is associate professor at New York University, a historian by training, author of New York Before Chinatown: Orientalism and the Shaping of American Culture, 1776-1882 (2001) and cofounder of the New York-based Museum of Chinese in America. Along with his coeditor, Dylan Yeats, he presents a cornucopia of snippets, illustrations and essays aptly collected as an archive demonstrating what they define as yellow perilism, a “practice rooted within a European Enlightenment and European colonialist worldview”.

The book is divided into three main systematic and logical sections. “

The Imagined West” traces a prehistory of yellow perilism through an outline of how the westerncentric worldview came to be, beginning with early maps that place Europe at the centre. “Manifest Destinies” centres on the constructions of otherness that western nations perpetuated through social Darwinism, manifest destiny, white supremacy and projected fears. “Indispensable Enemies” focuses on the manifestations of yellow perilism in the American context up to the present day.

Some of the extracts are especially illuminating, such as Teddy Roosevelt’s endorsement of Jeremiah Curtain’s historical account The Mongols (1904), comparing “Mongols” to North American Comanches and Apaches, written while he was president of the United States. By pointing to the relevance of The Mongols in terms of an ongoing struggle between East and West, the excerpt exposes an apparent American predisposition regarding the necessity of the West to defeat the imagined Asian enemy and to create a narrative history that rationalises state violence by accentuating the apparent brutality of the perceived other.

Yellow Peril! An Archive of Anti-Asian Fear is unique in presenting a carefully selected repository of anti-Asian images and writing, pop culture artefacts and political polemic, from a diverse and well-researched range of sources that includes excerpts spanning from Hegel and Marx to Jack London and WEB Du Bois. Stressing that yellow peril is one of the longest-standing and most pervasive racist ideas in western culture, the book traces its history to medieval Europe.

Modern incarnations include Sax Rohmer’s enduring Edwardian literary yellow-peril villain, Dr Fu Manchu, an archetype now embedded in characterisations of villains from the emperor Ming the Merciless of the 1930s Flash Gordon comic strip through to the Mandarin in the 2013 film Iron Man 3. Despite its reputation as a fading historical memory, a yellow-peril ideology persists, ranging from storylines in the 2004 reboot of the TV serial Battlestar Gallactica to campaign commercials from the 2012 US presidential election.

The collection nonetheless misses several related theoretical frameworks, such as Michel Foucault’s notion of biopolitics, which he discussed in his lectures Society Must Be Defended (1975-76), in that biopower is invoked to establish a continuum of regime, especially in the elimination of the biological threat to and the improvement of the racial species. Yellow peril, with its focus on biological differences to explain developing civilisations, was part of the rise of eugenics, Darwinism and Nazism in Europe between the two World Wars.

Other theories, such as postcolonialism and linguistic profiling, are only tacitly referred to. These theoretical frames could have added more complexity to the understanding of the development and constitution of yellow perilism.

The book appears to be aimed at an interested general audience while attempting to be academically vigorous, although there seems to be uncertainty about the level at which the content is presented. Further explication and more detailed introduction to the excerpts would have been useful; for instance, are the definition and location of the Eurasian steppe common knowledge?

Specific elements are not fully or further developed, such as the physiological distinction of single eye flaps; neither does the book examine examples of yellow perilism that have occurred in countries such as Mexico, which may create problems for the phenomena mostly characterised as West-East relationships.

The collection offers considerable investment in visual references and analysis of political cartoons and advertising imagery, although at times the writing could be expanded, such as the discussion of processes of scapegoating and stereotyping. Some background to the definitions of terminology connected to such processes, and their alliance to psychology and sociology, would have been helpful to the readers.

An intellectually stimulating and ambitious book, Yellow Peril! An Archive of Anti-Asian Fear both benefits and suffers from its broad range. It excels as a fresh and light read with a wide variety of sources and topics, but its breadth prevents the analysis from delving deeper and from including more contrasting viewpoints.

With such a broad topic it is inevitably difficult to delimit the central writers and texts, but the editors have done an admirable job of compiling this wide range of materials into an attractive and accessible collection.