Paul Durcan: the most playful poet in Ireland

His latest book contains 67 poems on such disparate topics as the weather forecast, the Syrian war, a visit to the GP, retail therapy, clampers and Seamus Heaney. There is sadness, illness, anger and trademark humour 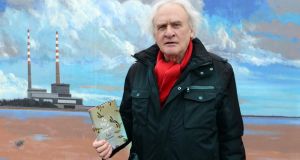 Paul Durcan in front of a mural in Sandymount: in Breaking News, the poet recalls the final conversation between himself and Seamus Heaney on Sandymount strand. Photograph: Cyril Byrne

Paul Durcan is adding another packet of sugar to his cappuccino. “God,” he says, by way of apology, “I’m a terrible man for the sugar.” But he keeps stirring anyhow.

Ireland’s most playful poet has come to the Davenport Hotel in Dublin to give me a sneak preview of his latest collection, The Days of Surprise. He produces the book from his bag and runs his hand over the cover; it’s a handsome affair, emblazoned with a charm of flying goldfinches and, in discreetly tiny letters beneath the author’s name, the line “Winner of the Lifetime Achievement Irish Book Award 2014”.

This distinction was conferred on Durcan at last year’s Bord Gáis Energy Irish Book Awards. “It came out of the blue,” he says. “I’ve no idea whose idea it was, I’ve no idea how it happened, but it definitely lifted the old spirits.”

The new book contains 67 poems on topics as disparate as the weather forecast, the war in Syria, a visit to the GP’s surgery, the joys of retail therapy and the clampers. Their tone is also hugely varied. Durcan’s trademark humour is there, of course, along with typically impish titles such as The Last Great Achill Island Volkswagen Beetle Protestant and The WB Yeats Shopping Centre, but there’s also sadness, illness and a great deal of anger.

How does he get it all to hang together? It’s part of the job, he says. “Some poets try to write the same poem over and over, and that’s a totally valid thing to be doing. You just hope that you don’t descend into chaos, trying to produce poems that are very different from one another. The subject matter of these is very different, and the kinds of poems are very different, but that’s what I’m always trying to do.” He frowns at his contents page. “Sixty-seven pieces,” he says, “but then again, they’re culled from probably at least 200, written over three or four years.”

The ordering of poems within a collection is very important to keep the chaos at bay. The Days of Surprise begins with Durcan’s childhood in Dublin, moving through early adolescence and teenage rebellion. One piece, The Poet and the Judge, describes the night his friend Michael Hartnett turned a mahogany dining chair on its back in the Durcan house and lay on it thus upended, smoking and listening to rock’n’roll, to the eventual outrage of Durcan père, who turns up in a navy-blue dressing gown to put an end to the party.

“I’m trying to record, in verse, a moment – like a photograph – things that happened,” says Durcan. “At certain points in your life, always by chance, you’re lucky enough to meet someone who becomes a friend. I met Mike when I was 17 and he was 19, going on 20. Luckily for me we hit it off.”

Another poem in the opening sequence, Il Bambino Dormiente, is about a recent trip to Venice to see the Bellini painting of that name at the Gallerie dell’Accademia, where, as the poem wryly notes, Durcan availed of the “half-price entrance fee for a European pensioner”.

This is his own favourite piece in the collection. “I’m obviously thinking in the poem of my mother, and myself as an infant,” he says. “It’s a bit ridiculous to pick one poem, but to me that would probably be it. From the writing point of view, it reads as I would want it to read. There’s nothing that is not right about it for me.”

The closing lines leave the reader in no doubt about the poem’s subject matter: “I got a Ryanair early flight back to Dublin, / To settle my affairs and get ready for my own little sleep, / Meeting my mother in the big deep”.

Death, grief and loss are leitmotifs throughout the book, as is the passage of time. “You get stabbed by these moments of loss,” says Durcan. “We all do. Only last night there was something on Channel 4 news about a boy in an English prison who took his own life. It had an absolutely overwhelming effect on me because I spent years in and out of mental hospitals, including a number of them in the London area, and some of them were pretty brutal places. It all came back. And I thought how incredibly fortunate I was that I was sitting here 40 years later.”

Strange as it may seem, he says his own poems can also cause him emotional distress. “There’s a poem in this book that I find particularly upsetting, Irish Bankers Shoot Dead Fifty-Seven Homeless Children. But my excuse to myself – apart from the fact that I think it’s written as it should be written – is that it’s something I saw. And heard. It was a kind of vision. I heard that terrible language. I ask myself, should I have published it? I ask the same about the one that follows it, 1916 Not To Be Commemorated. But there it is. And it’s there.”

The theme of surprise runs as a golden thread through the book. The title poem pays tribute to Pope Francis, who, in the days after his election, caused consternation among Vatican officials by giving his audience a thumbs-up sign instead of a papal blessing, and exhorting them to “have a good lunch”.

But it is also a tribute to Ringsend, where the poet currently lives; to its takeaways and bookmakers’ shops listed in an affectionate litany along with the Holy Communion pledges of local children: “I promise to follow Jesus by hoovering for my mam.”

Another striking image, in an 85th birthday poem for Brian Friel, is of the playwright “riding a Vespa scooter across the bogs of Mayo”.

“He did, you know. He wrote to me once, aeons ago, telling me about when he and Anne – whom he married – were young that they’d gone round Mayo on a Vespa. More recently, in another note, he said something about Belmullet being St Petersburg. On the north shore of Achill, when you look over at night, it’s like looking over the wide waters of the Neva. So you’re looking across Blacksod Bay at the lights of St Petersburg.”

One poem that is likely to cause a stir is Breaking News, which features the voice of the late Seamus Heaney coming down the chimney of a house in Mayo. “That’s something that really happened,” Durcan says. “In as much as I was driving up a mountain slope on Achill Island when I accidentally touched the dials on the radio of the car. And a voice said, ‘It has just been announced that the poet Seamus Heaney has died’.”

To that clinical announcement, Durcan adds his poetic raw material, piece by piece: the image of some firelighters sputtering in the bottom of a chilly grate; the opening words of Robert Louis Stevenson’s novel Kidnapped, which, he says – handing me a small piece of card with the sentence handwritten on it – Heaney once told him was his favourite opening sentence; his memory of the final conversation between the two poets, on Sandymount Strand; and of course the “antiphonal Derry brogue” of Heaney himself.

It is the job of the poet, a craftsperson, but also, somehow, an alchemist. And the poem catches fire and takes flight, up the chimney and out into the cosmos.

The Days of Surprise is published by Harvill Secker

THE DAYS OF SURPRISE TOUR: FESTIVALS AND READINGS

Fans of Paul Durcan’s poetry readings – of whom there are many, not least the UK’s poet laureate Carol Ann Duffy – will have plenty of opportunities to see him in action this year.

First up is the Pavilion Theatre, Dún Laoghaire, on March 18th, followed by a session at the Cúirt festival in Galway on April 23rd. April 25th will find him at the Triskel Arts Centre in Cork, while on May 7th he will be reading in Thurles, Co Tipperary.

The Gate Theatre in Dublin is the venue for May 10th, followed by a visit to Listowel Writers Week, May 27th-31st. On Thursday, June 4th, he will be in Westport, Co Mayo, from June 26th-28th at the Hay Festival in Kells, Co Meath, and on Wednesday, July 29th, at Scoil Acla on Achill Island.

On September 18th, he is in Connemara for the Clifden Arts Festival; October 21st brings him to the Image Arts festival in Waterford and The Days of Surprise tour will finish up at the Linenhall Arts Centre in Castlebar, Co Mayo, on December 3rd.