Out of Ashes by Konrad Jarausch: more ‘modernity’ than any reader can take 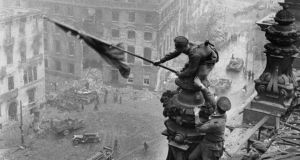 Book Title:
Out of Ashes: A New History of Europe in the Twentieth Century

According to Konrad Jarausch, a doyen of German historians, the legend of Dr Faustus “anticipates the paradoxical trajectory of twentieth century Europe, where humanist ethics were discarded in the quest for modernity”. In Out of Ashes, Jarausch contextualises movements in architecture, philosophy, literature and culture against the events that shaped the European century. Covering warfare, scientific advance, globalisation, shifts in production and the rise and fall of the welfare state, the struggle of competing modernities provides the leitmotif.

Jarausch tries to avoid writing a tale of progress, be it neoliberal, leftist or any other variant. Rather, his intention is to acknowledge Christian, Renaissance and Enlightenment roots while addressing Europe as a “discursive construct”. But a new angle is frustratingly lacking because the central concept – “competing modernities” – is not explored in sufficient depth.

Take the second World War. The “superiority of communist and democratic modernity” over Nazi “organic modernity” supposedly explains its outcome. Okay. However, a few pages later, and in a Cold War context, communist modernity is now inferior: a “far cry from utopian visions of liberty, equality and fraternity”.

Fair enough. But in the absence of substantial analysis of these competing modernities, the reader is left vainly groping for causality. What conditions determine the ascendancy of a form of modernity? Is one type of modernity specific to a certain period, or can it reappear?

This chatter cannot obscure the book’s conventionality. Despite being based on up-to-date academic research, Jarausch manages to turn this into history as you’ve heard it 100 times before. The content is routine and recognisable, the thesis safe and unprovocative. It is accessible, but then so is some of the most original writing.

Here, by contrast, the language and imagery deployed are stubbornly hackneyed. The belle epoque gave way to dystopia, to the pity of war and the “endless rows of little white crosses”. Oh, how “the red poppies of Flanders’ fields symbolize the futility of the carnage”! Soon we come across the well-worn images of Germans pushing wheelbarrows full of useless money. After the war, an “iron curtain” descends on the continent before being lifted, with Europe finally rising “like the proverbial phoenix out of the ashes of self-destruction”.

Can a history of 20th-century Europe avoid such cliches? Well, yes, when it also pledges to “do justice to the different trajectories of other countries” outside the western European mainstream. This the book fails to do, and the geopolitical reach (despite addressing the Soviet Union) is limited. Major earlier factors shaping political developments, such as the persistence of feudalism east of the Elbe, are underexplored. The likes of Hungary and Czechoslovakia dutifully appear on cue to be hammered by the Soviets in 1956 and 1968, before exiting stage-left.

Incredibly, over 800 pages, the Spanish Civil War has under half a page dedicated to it. The Ottoman empire, Greece and Turkey get even less. Likewise, the Balkans are almost entirely absent until their predictable 1990s walk-on.

More concerning are the factual errors. For example, Irish readers will be shocked to learn that Charles Stewart Parnell “succeeded in winning Home Rule” in 1914, and that the Irish Free State did not cease to exist in 1937 but continued as a polity into the Cold War.

This is a big text full of ambition, so of course a historian of Jarausch’s standing is to be given the benefit of the doubt when niggling errors appear. But their dogged recurrence, along with the sheer length of this tome, exposes editorial deficiency.

Reflecting on how the “central role of Belgrade is often ignored” in explaining the outbreak of the first World War, he warns that “the recent wars of Serbian succession suggest the need to reconsider this neglect”. Is he thereby consigning Serbs to the role of perpetual villain? Similar remarks on Germany would be unthinkable.

Likewise, verdicts on pop culture are highly impressionistic. Few would disagree that the Eurovision Song Contest is “lame”, but after 500 pages of such opinions, Jarausch suddenly begins meditating on whether postcolonial cultural uncertainty in Africa accounts for the popularity of the footballer Didier Drogba.

If this was virtuoso writing, it wouldn’t matter. As it is, one would be forgiven for wondering if this is a history of everything that has ever come into the author’s head. Indulgence has its limits – even if, like Jarausch, your influential academic career spans four decades and 40 publications.

Then there are the baffling and faintly sexist generalisations. Postwar consumption “led men to gorge on meat and potatoes and women to splurge on chocolates or cakes”; “classical music and academic lectures, designed to uplift and edify the public, were quickly overshadowed by dance tunes and variety shows, especially popular amongst women”. At times the grindingly predictable narrative gets way ahead of itself, with the Aids crisis appearing before the foundation of the EEC.

Along the way, Jarausch elbows aside other historians of the 20th century, notably Mark Mazower and Eric Hobsbawm. This is not a criticism: it is necessary for a book like this to justify its existence.

While Jarausch lacks the wit of Mazower or the analytical thrust of Hobsbawm, he possesses greater reach than their respective efforts, Dark Continent (1919-1997) and Age of Extremes (1914-1991). Frustratingly, he can’t resist bringing us right up to the current day, which delivers yet more stock material.

Out of Ashes offers a resolutely western narrative that focuses on Germany, Britain and France. It remains wedded to a liberal Atlanticist vision, one in which liberal Atlanticist gods such as Winston Churchill retain their standing and Barack Obama is lauded while Benedetto Croce and George Bernard Shaw appear only in cameos, to be written off as “misguided”. Though critical of liberal centredness and the grand narrative, Jarausch ends up replicating them.

Contemplating the Faustian compact, readers of this mammoth work may be struck by a more direct analogy. Jarausch, a veteran scholar, has abandoned the use of new (or imaginatively reconsidered) sources. Instead, he opts for a survey text so bent on displaying a seemingly unlimited knowledge that it sacrifices originality.

In itself, there is nothing wrong with this form. Narrative history trumps fussy micro-history as long as it delivers insight. But, disappointingly, fresh perspectives drop ever-so-slow in a work that, despite its size, recites the most familiar of stories.

Bryce Evans teaches history at Liverpool Hope University. His Ireland During the Second World War: Farewell to Plato’s Cave, published by Manchester University Press, is out in paperback in November