Oscar may have been gay but many of the key people in his life were women, says author Eleanor Fitzsimons. He also championed women writers and feminists 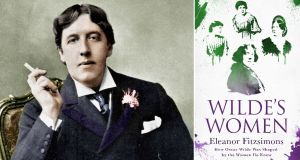 Oscar Wilde: “In the upper reaches of English society it was not the men, who mostly did not like him, who made his success, but the women”

“Do you have any other ideas?” With these words my endlessly patient agent ended his explanation of why the book proposal his naive new client had devoted the best part of a year to wasn’t generating sufficient interest among publishers. Sure, they admired my writing style and found my subject compelling but, and I’m paraphrasing here, in the cut-throat world of bookselling, they considered my biography of Harriet Shelley, tragic first wife of poet Percy Bysshe Shelley, too niche to take a punt on.

It felt at that moment as if the heady days of securing representation, winning a couple of literary prizes and dreaming of one day holding a book in my hands that had my name on the cover had come to an end. But nobody likes to leave an uncomfortable silence and it seemed impolite, if not downright remiss, to admit to having no more ideas at all. And so it was that I blurted out the words “Wilde” and “women”.

What was I thinking? Why would anyone in their right mind choose to write yet another book about Oscar Wilde? Well, unlike poor Harriet, he is universally renowned. Think about it. Not a single day goes by in this, the country of his birth, and in most other countries, without some broadcaster or columnist channelling Wilde’s wit, some theatre director reprising one of his sharp social comedies, or some aspirant author pitching a book about the minutiae of his life. Why shouldn’t I join them?

Anyway, I wasn’t really going to write about Oscar Wilde at all. I was going to write about the women in his life. “The women,” you ask. “What women? We thought he was gay.” Well, he was, but he was also a loving husband, a besotted boyfriend, an affectionate brother to his lovely little sister, a devoted son, and a brilliant best friend to some very impressive women. In Aspects of Wilde, Vincent O’Sullivan described his friend’s uncommon fondness for women:

I have always found, and find today, his [Wilde’s] warmest admirers among women. He, in his turn, admired women. I never heard him say anything disparaging about any woman, even when some of them required such treatment!

Even Lord Alfred Douglas, Wilde’s beloved Bosie, admitted: “With women he succeeded a great deal better than with men.”

Ever since I first encountered Lady Jane Wilde, Oscar’s flamboyant mother and an enduring heroine in his native Ireland, I’ve been intrigued by the influence she had on her son’s life and work. Jane was a poet, a revolutionary, a feminist and a lifelong campaigner for better access to education for women. She was also an incorrigible snob and a brilliant conversationalist whose Saturday conversazione and literary Wednesdays were always packed. She never doubted the genius of her sons and her wholehearted support may have made them reckless.

Far too little has been written about Wilde’s first love, Florence Balcombe, who left him for Bram Stoker and fought tenaciously to secure her rights to her husband’s literary estate. Best remembered for her beauty, she was described by writer Horace Wyndham as “a charming woman and brim full of Irish wit and impulsiveness”. Wilde found brief happiness and stability with his wife, Constance, mother to his two beloved sons. Beautiful, accomplished, politically active and hugely supportive of her brilliant husband, she did her best to stand by him until the end of her heartbreakingly short life.

As an individualist, Wilde believed that few limits should be placed on anyone’s life. He chose as some of his closest friends, freethinking women who challenged conventional gender roles and pushed their way into the public sphere, ignoring the tut-tutting of a society determined to keep them down. He traded witticisms with these women, promoted their work, collaborated with them on theatrical productions, dedicated stories to them and drew inspiration from their lives. Several of his most outspoken and memorable characters are women: Lady Bracknell in The Importance of Being Ernest, Mrs Erlynne in Lady Windermere’s Fan, Mrs Allonby in A Woman of No Importance.

While some of Wilde’s friends, Lillie Langtry, Ellen Terry and Sarah Bernhardt, are household names, he also engendered extraordinary loyalty in women who are largely forgotten: witty and vivacious Ada Leverson, who inspired his sparkling dialogue; and kind-hearted Henrietta Vaughan Stannard, who published bestselling novels as John Strange Winter and invented her own line of cosmetics. When Wilde toured America, society women paved his way. When he edited The Woman’s World, a progressive women’s magazine, he invited contributions from feminist campaigners and leading thinkers on gender.

At Oxford, Wilde dedicated his Newdigate Prize winning poem, Ravenna, to George Fleming, nom de plume of playwright and novelist Julia Constance Fletcher; he admitted that he was “attracted by her in every way”. He gave renowned feminist and pacifist Helena Swanwick her start in journalism and she wrote of him: “His extravaganzas had no end, his invention was inexhaustible, and everything he said was full of joy and energy”.

At the height of his fame, Wilde was welcomed into the most fashionable drawing rooms in London. As O’Sullivan put it:

In the upper reaches of English society it was not the men, who mostly did not like him, who made his success, but the women. He was too far from the familiar type of the men. He did not shoot or hunt or play cards; he had wit, and took the trouble to talk and be entertaining.

Yet many of these women distanced themselves after he was imprisoned and poet Alice Meynell, formerly an admirer, declared “while there is a weak omnibus horse at work or a hungry cat I am not going to spend feeling on Oscar”.

The women in Wilde’s Women are deserving of at least one book each, and in some instances these biographies exist. Their lives are fascinating and fraught with the challenges of operating in an oppressively patriarchal world. By examining them collectively in terms of their relationship to Wilde, I hope to bring them to the attention of a new readership, and to expose a neglected facet of the most-talked-about man in the world.