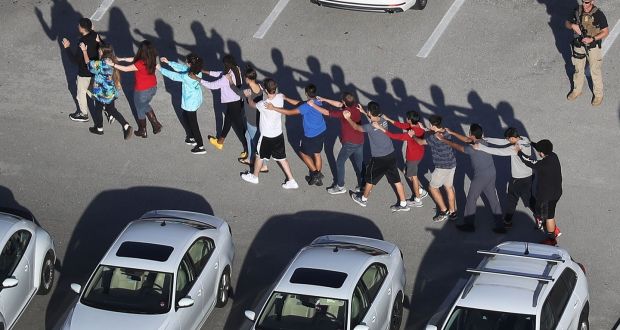 Last month, 17 people, 14 of them children, were killed in the Stoneman Douglas High School in Florida, leading to the latest in a series of empty promises from US politicians that something must change with regard to gun laws. The worst such incident remains the Sandy Hook Elementary School shooting in December 2012, when 20 children and six adults were murdered. The events of that tragedy are mirrored in the opening pages of Only Child when a gunman – the same age as the Sandy Hook gunman – enters a school and kills 19 students and staff.

One of the survivors, seven-year-old Zach Taylor, is the narrator of this deeply problematic novel. His older brother, Andy, is one of the victims and we follow Zach’s story as he and his parents struggle to cope with their loss, particularly his mother Melissa, who begins a crusade of vengeance against the killer’s parents.

There have been many novels narrated by naive young characters since Emma Donoghue’s triumphant Room, and school shootings have featured in DBC Pierre’s Vernon God Little and Lionel Shriver’s We Need to Talk About Kevin. Last year, another American writer, Gin Phillips, published an effective thriller, Fierce Kingdom, in which a mother and her son are trapped inside a zoo while gunmen roam the grounds.

The strength of Only Child lies in Zach’s voice, which is authentic and moving. It’s not easy to write a child that young and make him interesting to adult readers but he has the right balance of charm, innocence and wisdom to make him an appealing narrator, one for whom the reader roots. His disintegrating relationship with his parents is well-drawn and Navin makes a wise choice in allowing Zach to feel conflicted about his feelings for his dead brother, who bullied him relentlessly. He’s glad that things at home might be better without him but, of course, he also suffers tremendous guilt at such selfishness.

His parents too are engaging, although a subplot involving an earlier affair between Jim, Zach’s father, and the mother of one of the murdered children feels unnecessary for it’s both underdeveloped and seems out of character for a man who is consistently gentle with his wife and son.

However, despite the compelling nature of the narrative, the novel is ultimately undermined by a fatal flaw that makes it almost obscene in its insensitivity. For despite the terrible body count and the fact that the killer was carrying four guns, there is not a single reference anywhere to gun control or the destructive effect that rifles and pistols have in the States. Indeed, when Melissa’s campaign of retribution begins, she completely ignores the gun lobby, the NRA and retailers who sell firearms to unstable people, focusing her fury instead on the innocent parents of the killer, an emotional response that strains credibility.

There’s a moral cowardice to a novel that draws on the suffering of others to build its plot while completely ignoring the catalyst for that pain. One wishes that authors would take a position – any position – regarding America’s relationship with guns, even if that results in a commercial backlash. Navin avoids antagonising a large portion of her potential readership by not engaging with the second amendment but one could argue that this represents an abdication of responsibility on her part.

In the closing pages of the book, Melissa finally makes a throwaway comment about helping to “keep guns from ending up in the wrong hands” but it’s such an empty line, and appears so late, that it feels like something an editor has thrown in at the last minute to avoid criticism. Which is a shame because this is the first novel I’ve read on this theme written from a young child’s perspective and a discussion about guns, initiated from a position of innocence, could have made for a remarkable debut.

I appreciated so much about Only Child that it’s a pity to offer such criticism but a writer exploring as important an issue as this needs to be brave and there is simply no bravery on display here. By the time the sentimental ending arrives, we’re deep into Jodi Picoult territory and all the power of the opening 100 pages has been lost.

One can only feel sympathy for the families of victims of these atrocities but if writers are going to use fiction to explore their pain, then it needs to be approached in a much more thoughtful, politically astute and, above all, courageous fashion.