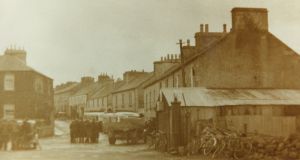 Twenty-four families boarded two buses in Clonbur, Co Galway on March 29th, 1940, to make new homes as part of a new Gaeltacht colony in Allenstown, Co Meath on the Craig-Waller estate. The Land Commission Resettlement Programme would redistribute their vacated holdings and thereby relieve severe congestion in Clonbur. My book tells their story.

While the story is particular to one group of Land Commission families, there were many hundreds of such resettlements, land acquisition and distribution in Ireland. There was scarcely a county or parish in Ireland which did not have Land Commission families either leaving or resettling. All of the western counties from Donegal to Cork saw migration to other parts of the country and some within the counties.

Midlands and eastern counties such as Louth, Cavan, Longford, Westmeath, Meath, Dublin, Wicklow, Kildare, Carlow, Kilkenny, Laois, Offaly and Tipperary had significant resettlements. Similar stories of migration, resettlement, and adaptation to a new life could be told in all of these counties.

The story starts in 1800s in Clonbur and profiles the place where they lived and traces the families up to 2019 nearly 80 years after the 1940 migration. There’s a spine of hard facts on the land issues, but it also captures aspects of the social history of the place they left, and the place they made home. Their customs, their language, poetry, rhymes, their beliefs, their “ceilidhing”, superstitions, wakes, folk cures etc.

There was sadness, weeping, keening and excitement, trepidation and hope in equal measure. There were “strong men kissing stones walls in tears”. The children, many of whom had never seen a bus before, were excited and boisterous, the men were stoic and the women were emotional, but strong. There was a living wake the likes of which had never seen before in Clonbur. Their cattle, sheep and all their worldly possessions travelled separately in 13 lorries.

They left the beautiful scenic lakes and mountains surrounding Clonbur to take the five-hour drive to the lush, fertile lands of Meath. The place they left had a very turbulent history; with murder, proselytising and cruel evictions burned into the hearts and souls, and still in the living memory of the elders. It was among the poorest and most congested of districts anywhere on the west coast. The elders often remarked that you could not live on scenery alone.

This resettlement was identified by De Valera’s government which swept into power in 1932 and by the Irish Land Commission as Gaeltacht Colony number 5. They made this journey in the face of fierce and, at times, vitriolic opposition from opponents in Meath. Slogans painted on roads and rooftops proclaimed, “NO MIGRANTS HERE”; “MEATH LAND FOR MEATH MEN”; “MIGRANTS NOT WELCOME”.

This day would shape the rest of their lives, the lives of their children and of generations to come.

The women of Allenstown were key influencers in the decision-making process and worked hard to make it a success. Nineteen women are profiled and their lives before and after migration.

There are strong continuing links to the West, which were celebrated repeatedly. The book concludes with a commemorative football match in Clonbur in 2019, between a local selection and a team comprising descendants of the migrants.

Conclusions are drawn about its success as a Gaeltacht colony, its impact on the cycle of emigration, the economic success of the migrant families and their appetite for liberation through education, their adoption of progressive agricultural practices, an assessment of the Land Commission processes and practices.

The story is told from the perspective of an insider who grew up in the first generation of children born in Meath. The book is illustrated with maps, copies of land contracts with the Land Commission, reports of LC inspectors on individual families and their meagre means, tables, drawings, photographs old and new, unseen papers from renowned Professor Máirtín Ó Cadhain and unpublished family papers from the Craig-Waller family and very importantly the Land Commission files.

This archive of about 10 million Land Commission records, which is arguably the largest and richest body of untapped records in the State, is not accessible and is locked down in a warehouse in Portlaoise despite promises by Government during parliamentary debates on the winding up of the Land Commission under the Irish Land Commission (Dissolution) Act, 1992. Despite repeated efforts by scholars, academics, archivists, elected representatives through repeated parliamentary questions over three decades, and the general public, the records remain closed.