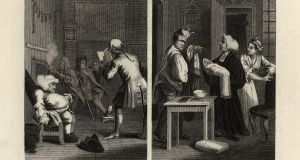 Vintage engraving of William Hogarth’s frontispiece to The Life and Opinions of Tristram Shandy, Gentleman by Laurence Sterne.

After the 250th anniversary of Lawrence Sterne’s death in 2018, it seems right and timely for a new critical edition of Sterne’s most famous work, The Life and Opinions of Tristram Shandy, Gentleman. This is a compact new student edition, featuring textual notes and laid out with Hogarth’s original frontispieces. For a text as visually-playful as Tristram Shandy, this is welcome, and will provide ample opportunity for readers to experience Sterne’s novel as an object as well as a text. Though the production value (the paper being very thin) makes this not an ideal reading copy, the inclusion of various paratexts, particularly Sterne’s discussions of the novel with a variety of correspondents, make this a good study copy. The general reader, too, might find interest in Sterne’s letters, and the controversies of the novel’s reception. Judith Hawley’s textual apparatus is detailed, and shows the progression of the novel through various editions and versions. Likewise, the extensive selection of criticism, from contemporary responses to 21st century studies, demonstrate the vitality and longevity of Sterne’s controversial comic masterpiece.  Seán Hewitt

A dystopian debut novel that reimagines an all-too-recognisable and unsettling future. Leila will prompt many uncomfortable and pertinent questions regarding class and religion.

Shalini is left daughterless and without a husband when a group of city wardens named Repeaters come and take her to The Towers, a place for “impure” women and her three-year-old daughter, Leila, goes missing. Meanwhile, the unnamed Indian city where they live is erecting walls to segregate citizens based on their religion and caste, leaving the remaining people to reside in the slums outside the city walls. Social order is of paramount importance and the motto of the city ironically becomes, “purity for all”.

Prayaag Akbar’s novel is a startling and pertinent feat of social criticism. It is as urgent as a knife and as chilling as The Handmaid’s Tale. Families are torn apart, women are victimised and people are encouraged to betray one another all in the name of social “purity” in this gripping and intelligent story.  Mia Colleran