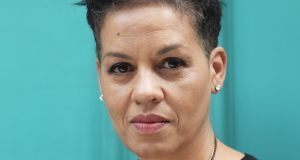 Kit de Waal: “It would be very easy to have given the book a happy ending but I know from my personal experience that that wouldn’t happen.” Photograph: Justine Stoddart

“It’s a short book about a little boy. A tiny story,” says Kit de Waal of her debut novel My Name is Leon. Well, maybe it is but it packs quite a punch. The story of a mixed-race nine-year-old who is taken into care when his mother falls apart after the birth of his baby brother, My Name is Leon is set in 1981, against the backdrop of race riots which saw many UK city suburbs erupt in flames and looting.

It ought to be a gloomy read. Instead, with its moments of joy and hilarity as well as tears and snot, the book is a page-turner. “My name is Leon and my birthday is on the fifth of July nineteen seventy-one. Your birthday is today,” the young narrator tells baby Jake the first time they meet. “School’s all right but you have to go nearly every day and Miss Sheldon won’t let proper footballs in the playground.”

How did de Waal come up with Leon’s strikingly singular voice? “I went on to Google and I found a black-and-white picture of a little mixed-race boy on a bike,” she says. “I printed it and stuck it on my computer so that if I was writing a scene – for example, if it was a scene in this room – I would think, ‘What does he see?’”

She cocks her head and studies the Merrion Hotel’s No 23 bar. “I’d be thinking, ‘Georgian. Beautiful tapestry curtains.’ Because I’m an adult and I’m into interior design. But Leon would come along and he would think, ‘God – there’s a lot of chairs. Why is there so many chairs?’ And also, I used to do this.”

She jumps up and hunkers low beside the table, causing a mild ripple of alarm among nearby lunchers. “If you’re 4ft tall, the world is a different place. In a crowd, you don’t see faces: you see backsides, or waists, or handbags. So overall, I tried to take me out of the story.”

Even so, My Name is Leon is suffused with de Waal’s life experience. Now 55, she left school at 15, got a job as a secretary with the Crown Prosecution Service and quickly found herself doing the work of an unqualified solicitor. She subsequently spent 15 eventful years in the area of criminal and family law.

“It would be very easy to have given the book a happy ending,” she says. “But I know from my personal experience that that wouldn’t happen. I wanted to be true to what Leon’s life would really be like. And, also, I wanted to be fair to all the other people who appear in the book.”

Among the latter are Leon’s birth mother Carol, his foster-carer Maureen, her sister Sylvia (who takes him in when Maureen is hospitalised with a serious illness) and the social workers assigned to the family. The real-life care system, de Waal insists, is not made up of cartoon goodies and baddies. “They’re just people. People who are trying their best, usually.”

De Waal has been writing short stories and flash fiction for a decade and this, along with her love of film, has shaped her literary modus operandi. “I really, really love film,” she says. “Not new films – I can’t watch anything post ’75 – I’m a real black-and-white, film noir person. Films are made of scenes. A book is a continuum insofar as you have a narrative and a climax and all of that, but it’s just a series of scenes – which is, for me, a series of index cards.

“I’m a total plotter. I put each scene on an index card, put them on the table, change them around, walk around with them for about three months, go ‘Hmm: does that go there?’, then redo them again until I’ve got it. And then the writing is relatively quick because you’re not making decisions about plot or character or motivation.”

If she’s a film fan, did she “see” her characters in her mind’s eye? “Oh, god. Totally. Every character in Leon has got a back story that I’ve written on my computer.”

Ciarán Hinds, I decide. “Yes!” De Waal claps her hands. “Brendan Gleeson could be a bit jolly, whereas I’ve never seen Ciarán Hinds be jolly. He does sinister, and he does broken.”

Sinister and broken: that’s Mr Devlin, all right. Without giving away any plot, is it fair to say that a kid like Leon shouldn’t really be hanging around with the likes of Mr D?

“Oh, totally,” agrees de Waal, who is now looking shocked by the storyline of her own book. But this potential for catastrophe is the whole point of the novel. “Mr Devlin might be a child molester. Tufty could be a violent man. Leon could have been attacked in the shed by Castro; he could have been nabbed in the street. He spends too much time out alone on his bike. He’s a really vulnerable boy, for lots of reasons. He’s broken-hearted. He’s in grief. His mother’s buggered off. He’s got too much freedom, and he’s desperate to make connections.”

De Waal’s intuitive understanding of Leon’s situation stems from her own family background; Irish mother, African-Caribbean father. “I’ve got lots of uncles and aunts and cousins who are Irish, so my memories of childhood are of being an Irish child in Birmingham,” she says.

She married into a very different sort of family. Her husband, John de Waal, is a QC. His brother Edmund is the author of the bestselling memoir The Hare with Amber Eyes; his mother is the Benedictine spiritual guru Esther de Waal.

“They’re an upper middle class, academic, Jewish, Dutch, English family,” she says. “And my family – I wouldn’t say we were brought up in poverty, but there was no money. And we were not well educated. We all left school at 16. My parents never once in my life asked me about homework. They wouldn’t have known what it was.

“So we’re very, very different on the surface – and yet very similar, actually, in that we both came from large families; loved and happy. So we sort of had the same experience, just from different sides of the tracks.”

This awareness of social inequalities led de Waal to donate part of her advance for My Name is Leon to fund a bursary for a disadvantaged writer at London’s Birkbeck University. “I thought I would write a cheque for £10,000, give it to my friend at Birkbeck and go ‘Bye’,” she says.

“So wrong. We advertised for one place and we had 138 applicants. I had to read the submissions; 5,000 words of creative writing as well as a 1,000-word personal statement. And when you read of people’s journeys and why they want to write and the barriers they faced – people who have contacted MS, or have no money, or have been sent to prison – it’s so humbling.”

The young Birmingham poet Stephen Morrison-Burke eventually emerged as the winner, but de Waal has extended her support to the top five applicants, and is setting up an autumn writing masterclass for the top 20.

“To be honest, I didn’t think it would have this impact on me. I’ve turned into a zealot,” she says. In a good way, though, surely? She laughs. Nods. Shakes her head. “In a good way.”

Who’s your favourite child narrator in an adult novel?

First to spring to mind is probably five-year-old Jack in Emma Donoghue’s Room – but there are a few equally accomplished young storytellers.

Oskar is nine, and has just lost his dad in the 9/11 attacks. When he finds a key in an envelope inside a vase, he must seek answers on the streets of New York.

Ten-year-old Darling faces the biggest challenge of her life when she moves from a shanty town in Zimbabwe to live with her aunt in Detroit or, as she calls it, “DestroyedMichigan”.

The Ocean at the End of the Lane

You turn seven and nobody comes to your birthday party? That’s tough. But things only get stranger for the unnamed narrator of this fantasy novel: coins in his throat, wormholes in his foot, you know the sort of thing.

The Earth Hums in B Flat

Gwenni is 12 and lives in a small Welsh town where nothing happens. But then the father of the kids she babysits goes missing . . .

This tiny gem of a novel, which follows a year in the life of the eponymous 10-year-old from Barrytown, deservedly won Doyle the 1993 Booker Prize.