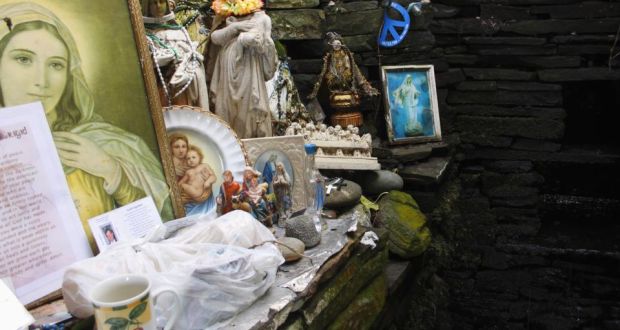 Liscannor in Co Clare: The repeal of the Eighth Amendment appears to be one of the final moves towards the complete separation of church and State in Ireland.

Book Title:
Religion, Landscape and Settlement in Ireland: From Patrick to Present

The sheer audacity of this undertaking by Kevin Whelan is nothing short of breathtaking. Covering the period from 432 up to 2018, and dealing with a topic as contentious as religion has always been in Ireland, was ambitious in itself. But then adopting a 32-county approach must have added considerably to the workload, given the stark sectarian problems which have characterised the Six Counties of the northern province since the time of the plantations.

This is clearly the book that Whelan felt he had to write, the one which marries his considerable skills as a historian and social commentator, while also providing an outlet for his passionate interest in the religious landscape of Ireland.

Edward Said (1935-2003), a man well-acquainted with the power of ideologies to divide communities, sums up the danger of insular mindsets thus: “The more one is able to leave one’s cultural home, the more easily is one able to judge it, and the whole world as well, with the spiritual detachment and generosity necessary for true vision.” Ireland’s island status and history of colonisation did not always facilitate the detachment that is necessary for a rational appraisal of our fraught relationship with religion and, by extension, with our nearest neighbour.

Because his introduction is so short, Whelan does not go into any great detail about the central thesis of his study. Nor does he recap on what he has covered at the end of each chapter. The organic nature of the book requires the reader to follow in a chronological manner the evolution of religion in Ireland from medieval times up to present, an approach which effectively rules out reading chapters in isolation. The situation in which Ireland finds itself at present has many links with the distant and recent past: religious customs and practices evolve gradually over time, but can also change from day to day.

For example, paganism did not suddenly disappear with the arrival of Saint Patrick. An attachment to ancient myths, irrational fears in relation to fairy forts, the tradition among Catholics of making the sign of the Cross when passing a church or graveyard, all these persist right up to the present. Whelan is particularly adept at producing local examples of sites containing holy wells, monastic ruins, churches, chapels, cemeteries, unusual parish boundaries, places of pilgrimage, and showing how in many instances villages and services grew up around such physical edifices. The attachment to the dead, to the rituals surrounding burial, forged a noticeable divide between Catholicism and various forms of Protestantism. Whelan notes that the “extravagant Catholic lamentations at funerals disgusted reformers”, but it was not only the reformers who were put out by the “keening” engaged in by women at times of death: Catholic priests also were unimpressed by such emotional outbursts and sought to suppress them. Equally, excessive drinking at wakes was frowned upon by the Catholic clergy.

While women were responsible for birth, the task of ensuring that certain traditions with regard to death were respected also fell on their shoulders. The “caoineadh” or keening they engaged in often acted as “a cathartic, therapeutic theatre of death, which explored both the emotional experience of loss and the necessary continuity of the surviving community”. The Famine changed attitudes towards funeral practices, as the sheer volume of corpses during those tragic years did not allow for the same lamentation for each passing soul. Even proper burials were often not possible at this time.

Land and buildings were the source of conflict and competition between the various denominations. The Protestant Ascendancy had ownership of the best land and their churches were impressive in terms of scale and design. (It is worth noting in passing that the places of worship frequented by Catholics in previous centuries were generally referred to as “chapels”, not “churches”.) Payment of tithes to the Church of Ireland sparked much resentment among Catholics. Rather than wishing the extermination of even the most tiresome papists, however, most Protestants wanted them to be, in a biblical phrase borrowed by Charles Boyle, fourth earl of Orrery, “hewers of wood and drawers of water”.

The successful campaign for Catholic Emancipation led by Daniel O’Connell showed how the Irish were prepared to contribute generously to causes they held dear if they were mobilised effectively. In the 19th century, in spite of the massive numbers of people who died or emigrated during the Famine, a huge building programme was undertaken by religious orders and the diocesan clergy, with the support of indigenous Catholics anxious to have schools and churches that could rival and surpass those of their Protestant neighbours. The Church of Ireland’s numbers and prestige declined significantly during this period, with Catholicism heading in the opposite direction.

When one considers the secularisation of Irish society from the 1960s onwards (with the possible exception of the six northern counties), the surprise, in Whelan’s opinion, is not the “collapse” of organised religion, and of Catholicism in particular, but how it became so dominant in the first instance. After independence, there was certainly a deliberate attempt made to assert Catholic values in the newly formed southern State, but increased access to education during the 1960s, combined with the advent of television which replaced family prayer in many households, more disposable income and significant migration from the country to the city, produced the classic conditions for increased secularisation. The repeal of the Eighth Amendment allowing legal access to abortion appears to be one of the final moves towards the complete separation of church and State in Ireland.

Kevin Whelan’s scholarly study points out the innumerable links between religion and Ireland’s cultural heritage, links that can be seen in literature, folklore and the built environment. While religious belief is now in decline, it should not be forgotten that it constituted a vital part of what it was to be Irish at various stages in our journey to where we are today.

Eamon Maher is a lecturer at the Technological University Dublin (Tallaght campus). His latest book, co-edited with Derek Hand, Essays on John McGahern: Assessing a Literary Legacy, will be available from Cork University Press early in 2019