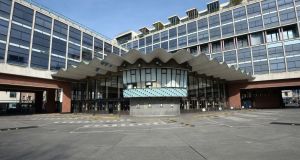 The architecture critic Owen Hatherley is that most English of things, an incurable Europhile. Over the past decade, in books such as Militant Modernism and A Guide to the New Ruins of Great Britain, he has built for himself a certain embattled vantage: scourge of the speculative dross of contemporary British planning and architecture, defender of what remains from the country’s brief romance with Modernism. (Embattled up to a point, that is: his once scandalous taste for postwar concrete is now widely shared, and coffee-table books about Brutalism may be found in the gift shops of Victorian museums.) An idea of Europe has long functioned as a supporting strut in Hatherley’s thinking: a Europe where rational planning, social optimism and aesthetic daring have prevailed against the UK’s devil-take-the-hindmost attitude to architecture, and to much else. Has this Europe – a Kraftwerkian dream of placid dwelling, super-glide transport and cultural surprises – ever actually existed? While the Brexit farce unfolds, Hatherley slips under the English Channel to find out.

His Europe is not exactly where you would expect to find it. Trans-Europe Express begins with a brief tour of a few major capitals, which tend to irritate or bore the author. Brussels, for example, is a speculative mess, its monuments soaked in the blood of the Congo. Paris is all “white boulevards full of solely white people”. Berlin merits no more than a few pages. Hatherley is more interested in knottier cases, where the main tendencies he identifies in European cities may most starkly be seen, sometimes together: tabula rasa postwar Modernism, tourist-trap preservation and incongruously UK-style commercial free-for-all. As in his previous books, what he seems most to admire is grandeur in raw concrete, a civically minded refusal of both kitschily “iconic” starchitecture and the kind of street-level human-scale regeneration we are all meant to love these days. He finds what he is looking for first in Le Havre, a port with links to his native Southampton – one of the book’s points is that Britain has never been culturally isolate or sovereign – and home to (purportedly) Europe’s largest square. It is hard to think of a more Hatherley-esque image than the little black-and-white photograph he gives us of the 1958 Hôtel de Ville and empty environs.

Like many travellers from Britain, Hatherley catches himself thinking “Ah, this is Europe, and this is better.” Better means: more organised but more liberated, more beautiful and less charming, more expensive yet more democratic. All of this is true, and not. He discovers the remnants of a 1970s Communist-led urban renewal in Bologna, historical evidence of multiculturalism in Trieste and Nicosia, a very British city centre in Leipzig – disfigured by a retail park that belongs on the outskirts, if anywhere. In Dublin, predictably, he loves the logical Georgian streets, deplores dockland cartoons by the likes of Daniel Libeskind, clings to Liberty Hall and Busáras as relics of a Modernist promise never followed through – “as in the UK, contemporary Irish architecture is marked by a striking parsimony, a cheapness and carelessness in construction”.

I happen to share Hatherley’s taste for Modernism, and his admiration for the civic imaginations that sought to remake ordinary dwellings as clean, ordered aesthetic excitements. One can’t help but applaud his belief in such ambitions, and equally his scorn for the cheap, bland sludge of mock-antiquarian suburb and retail-shed nowhere that passes for new building in his own country. (Never mind the gleaming empty towers of London’s new absentee Oz.) But as a book about what the English used to call “the Continent”, whether real or imagined, Trans-Europe Express very literally does not go far enough. For sure, Hatherley ranges about beyond the weekend-break or stag-do circuit – Arborea, Lviv, Aarhus and Vyborg – but it is striking that he hardly speaks to a soul: in these pages, at least, if not in reality. Architecture remains something merely to be looked at, and often very briefly, so that one may wonder at Hatherley’s mild contempt for tourists.

It has to be said too that Trans-Europe Express is poorly written, full of prefab phrases and rickety grammar. Oddly, eminent critics such as the very eloquent Jonathan Meades have hymned Hatherley’s prose as if he’s a John Ruskin for our time. He really isn’t, not with phrases such as this one: “the Meuse-Rhine Euroregion does directly not face the Atlantic”. And worse: ‘It’s what us [sic] frustrated aesthetes . . . all dream of’. Or this tone-deaf thing: “precise, hewn-from-one-rock red brick”. It’s possible the looseness of the prose is a remnant of the book’s origin in occasional articles and essays – but this really shouldn’t matter: miscellany and vagrancy ought to enliven, not slacken, the writing. And for all his electively foreign self-fashioning, Hatherley can seem remarkably Pooterish, like a caricature Brit abroad: dodging the sunshine and moaning about “that infuriating Parisian ‘look at me as I enjoy our traditional cafe culture’ look”. In a recent interview, Hatherley announced this would be his last “walking around and looking at things” book. I’ll look forward to his stopping and asking the odd cafe-terrace habitué about where they live and what it means.

Brian Dillon’s Essayism and In the Dark Room are published by Fitzcarraldo Press. He is working on a novel and a book about sentences