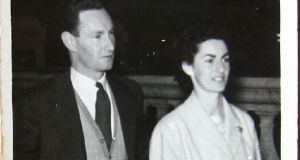 Brian Dillon: ‘My parents crossing O’Connell Bridge. It is one of only two photographs of my parents that I own’

Book Title:
In the Dark Room

Part personal memoir, part scholarly disquisition, In the Dark Room explores the relationship between memory and physical space – the way a mere nook or shaft of light can evoke deeply buried feelings and sensations.

The sale of the author’s childhood home prompts a series of reminiscences – beginning with the untimely deaths of both his parents when he was a young man – which are interwoven with vignettes about philosophers, including Proust and Bachelard, and English novelists such as Eliot and Dickens.

The current vogue for autobiographical literary non-fiction makes this a timely re-issue. That In the Dark Room feels arguably more relevant now than it did when it was first published in 2005 owes something to the remarkable afterlife of WG Sebald.

Sebald’s influence is worn here with the unapologetic earnestness peculiar to debut works, right down to the forensic precision and meditative languor of Dillon’s prose. The book’s abundant intertextuality is also implicitly autobiographical, representing the intellectual trajectory of an emerging writer.