Milkman by Anna Burns: putting Ardoyne on the literary map 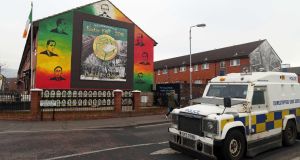 Whatever the result of the deliberations of the Man Booker Prize judges on Tuesday, the extent of the achievement represented by Anna Burns’s Milkman in Irish literature should continue to be hailed and celebrated. Reviews have praised the effectiveness of its most notable characteristic: the erasure of specific names in favour of a surreally generic set of signposts. They laud its humanism, its condemnation of tribalism and inner-community surveillance and control, as well as its attention to the still underplayed dynamics of gender inequality during the Troubles, in particular women’s vulnerability to a predatory violence at once psychological and physical. Heralding its originality, its humour, its charm and seductiveness, as well as its bewitching “strangeness” and “eccentricity”, critics cite a series of forbearers that any author would be proud to claim, among them Swift, Sterne, and most frequently, Beckett.

Yet beyond all these fully justified plaudits, Milkman needs to be recognized as a book that sounds the soul of the people and the place it portrays. Reviewers have seen its erasure of names as an ascent to “universalism”, a portrayal of any “totalitarian” society at any time, anywhere. While that may be true, those who know the place in which it is assumed to be set, and who-presumably like the author-have some degree of distance from it, recognize a reality that is encapsulated by the absurdist-generic names rather than transcended by them. Ardoyne, where Anna Burns is from, was always an anomalous yet sharply-defined district. Before the Troubles a socialist and not a nationalist stronghold, it is isolated geographically from other predominantly Catholic areas of Belfast. A British army manual referred to it as “an interface on the total perimeter” of the city, showing that Burns’s classifications have a precedent in the jargon of the conflict, in which the evasions of code were a tactic on all sides. My mother, who grew up in one of the “impossibly tiny houses” mentioned in the novel, observed the stroke of genius contained in the book’s very title, an in-joke that is never made explicit, though it is clear in Burns’s previous work No Bones: the IRA delivered petrol bombs in milk-crates to doors at the corner of each street. The narrator of Milkman refuses to credit her harasser with this origin for his moniker. When he is killed, the community supposedly discovers that it was simply his given name, just as the actual milkman who is a family friend, and mistakenly targeted by the security forces, becomes the subject of the following newspaper headline “Milkman really Milkman”. Burns’s use of names creates a fairytale in which the villain is exposed as truly ordinary, while the ordinary (and previously ostracized) man acquires the mystique of reassuring presence.

Beyond the traditional gender divisions so astutely captured by the book-between women who uphold the destiny wife-mother, and men as a forest of protector-threateners-one feature that seems immediately familiar as a characteristic of the people Burns is writing about is a certain distracted, manic obsessiveness. The narrator is as much assailed by the advice-giving and solicitousness of parties who want to correct her behaviour as she is by the slow creep of her paramilitary suitor’s spying, stalking, and insinuation. Those frantically imparting counsel are as dysfunctional themselves as anyone they want to help. In the language spoken by the characters, the book’s use of a pattern of anonymized ciphers has a further significance. Burns’s mixing of familiar Belfast phraseology (“away you on”) with intricate abstractions gestures toward the uncanny combination of the colloquial and the ceremonial in Northern speech, a blend which is itself a layering of codes.

Although the praise accorded to Anna Burns’s feminist perspective is apt and important, the rhetoric of the novel would make quick parodic work of any academic theoretical terminology. “Burns examines what I will term ‘paramilitary masculinities’” writes Dawn Miranda Sheratt-Bado, “she also considers what I will call ‘paramilitary-adjacent femininities’”. In fact, in the comprehensiveness of her portrayal of the archetypes of the community, Burns includes reference to the ways in which women-even women fulfilling traditional roles-hold and exert oppositional power. Her description of this reminded me of my grandmother standing at the door of her tiny house, hands on hips, addressing in an admonitory and wholly unintimidated way the “renouncers of the state”, as if they were little boys: “have you been shooting at the soldiers again?”

Above all, what is most powerful and moving about Milkman is the manner in which it grapples with and identifies the ultimate effects-or perhaps causes-of polarization. The participants in an evening French class are afraid to be charmed by a beautiful poetic description of a sunset sky; men and women are afraid to spend their lives with the people they love because What if we accept these points of light, their translucence, their brightness; … and then, just like that, the light goes off or is snatched away? The pattern of existence evoked by Milkman is so all-encompassing, aesthetically and politically, that it charts alongside actual death and murder the lurking threat of absorption into a kind of living death, a mummification of desire and hope that menaces everyone. Here is where we find the meaning of the comparison to Beckett. Burns’s humorously contentless allusions to the “political problems” directly recall the abstracted reference in Malone Dies to a young “lord mayor of Cork” who starved himself and had “political convictions.” Throughout his work, Beckett’s effacement of precise reference to Irish historical fact seems a symptom of pain and exhaustion, just as it allows the devising of a carnival of hilarity that gives absurdity centre stage.