Mike McCormack: ‘I had the canny idea of writing a long sentence instead of a book’

In his novel Solar Bones, McCormack has written an expansive tale about a ghost, which is also a ‘hymn to engineers’ 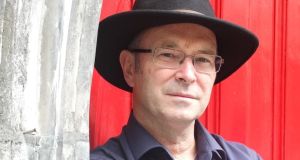 Mike McCormack’s new novel began when he was struck by a very simple idea. “There’s a man at home in the middle of the week, and he’s bumping into the furniture in his own kitchen,” he says.

A reader who has any acquaintance with McCormack’s work will immediately suspect there’s going to be a lot more to it than that. This, after all, is the writer whose debut collection of short stories, Getting it in the Head, contains an A to Z of parricide; whose novel Notes from a Coma, about prisoners being placed into persistent vegetative states and hooked up to the internet, makes intricate use of footnotes; and whose most recent story collection, Forensic Songs, features a conversation between two rural gardaí who mull over the security threat posed by the only man in Ireland who hasn’t yet written his memoirs.

“It came to me then,” McCormack says, warming to his account of the genesis of Solar Bones, “that this man is a ghost. He’s back from the dead.”

In north Co Mayo, where McCormack was born, and some areas of Galway – where he now lives – tradition has it that the dead can come back for just one day: All Souls’ Day. “In north Mayo they’re happy about it,” he says. “But in parts of Connemara they don’t like them to come back at all, because the dead have come a long way, and they’re hungry. They might eat you out of house and home.”

Like all of McCormack’s writing, Solar Bones contains elements of black comedy and the bizarre. But it feels totally unlike his earlier books. The author has swapped his trademark staccato, spliced-together narratives for an expansive, rolling tale that carries the reader along as resolutely as a river in spate.

“I figured – rightly or wrongly – that a ghost would have nothing to do with a full stop,” he says. “That a ghost might fatally falter at a full stop. Might dissipate.

“I’ve published three or four books which are pretty finicky works of dense, closely guarded, attentive sentences. I’ve always wanted to write a longer book, but I don’t have the kind of sprawling dramatic sense that would lend itself to a 400- or 500-page book.” He grins. “So I had the canny idea of writing a long sentence instead of a book.”

The narrator of Solar Bones, Marcus Conway, is an engineer whose life is constructed from apparently unremarkable components: a wife, two kids, struggles and successes at work, a shared interest in politics with his father.

“I’ve always admired engineers,” McCormack says. “I’ve said it before, that artists paint the world and writers write the world but engineers build the world. God gave us heaven and earth, but the world is the work of engineers.”

Also, he adds with a wry smile, “It’s not a crowded shelf, books about engineers. There’s far more novels about murderers. How many of us have ever met a murderer? And yet we come into contact with the work of engineers every day. We travel the roads they lay; we send our children to the schools and libraries they build.

McCormack’s fascination with the world of building and machinery provides first-hand material for the musings of Marcus Conway. A chance encounter with a dismantled wind turbine being driven along on a lorry sets Conway off on a riff that builds to the striking image of unwanted deities being disposed of in the ocean: “all these redundant gods lying crushed and frozen in the blackest depths with no surface marker to show where they lie . . .”

Another episode describes, with considerable affection, a street light that has been carefully placed in the corner of a field in the middle of a bog in Mayo: a detail McCormack gleaned from a real-life engineer. “He just shook his head when he told me,” he says. “I said, ‘Why can’t they take it down?’ And he said: ‘You can’t take it down. There’s five or six votes in that house.’ ”

McCormack is “a failed engineer” himself. “When my father died I felt that I should get a vocational education. I was the eldest in the family, and felt I had to provide for them. So I went away to study electronic engineering, which was the glamour subject at the time. I knew at once I just didn’t have the mathematics for it.”

He left after one term, went home and got a job in a pharmaceutical company – as a gardener. Far from being a waste of time, it turned out to be a pivotal year in his life. “I think I started on January 5th and I worked until September 4th. I went to college in Galway the next day to study English and philosophy. It was an important year. I was 18 or 19, and I did my most important reading in that year. I was on huge money: £20 a week. I used to go to Galway and buy books. I could read a book a day.”

McCormack read his way around the carousel of Picador titles, a treasure trove of literary inspiration: Pynchon and Borges, Kafka and Poe, Ballard and Barthelme. In its own way, Allergen Pharmaceuticals was inspirational too. “It was so high-tech: an enclosed environment full of skilled practitioners,” he says. “Working in it has been responsible for several closed environments in my own work.”

Solar Bones chooses to focus on another environment, the family. And not just any family but that rarest of fictional entities: a happy family. “My early books were full of young men going stone mad,” says McCormack. “They were full of violence, and the soundtrack was Scandinavian death metal. Now I’m middle-aged and listening to Hank Williams. I’m much more interested in family and domesticity.”

The Conways aren’t a saintly sort of family. Daughter Agnes is an artist; “Agnes the Unhinged”, her brother Darragh calls her. Darragh, meanwhile, is in Australia, “travelling and growing a beard”.

“They’re good at rowing and arguing,” McCormack says. “They aren’t at each other’s throats, even though they’re grating on each other’s nerves. I liked their company.”

Where did the title come from? “It has to do with the temporal rhythms that govern a day,” says McCormack. Solar Bones is the phrase he uses to characterise the rhythms of rural life. Daily news bulletins on the radio. The death notices being read aloud like a secular litany. Standing at the kitchen sink in the morning, looking out the window at the cars passing by, knowing exactly who is driving and where they are going.

As for that continuous running pulse that drives the book forward, it seems to be a matter not of form but of substance. It’s actually part of the story. And it’s not, McCormack adds, a stream-of-consciousness novel. “It’s not that at all. It’s not as fragmented as that. I think of it as stream of post-consciousness. That’s why it reads like a postmortem aria, or something like that.”

Or a poem, perhaps? “Poetry aspires to say the unsayable, and there’s a degree of that in Solar Bones,” he says. “There’s a span in this book from sandwiches to stars, and I think it tries to try to sing a song to connect those two things. It’s all set in that soggy hour in the middle of the day that’s neither the morning nor the afternoon. The book is strung between the divine bell and the temporal bell; the Angelus and the time signal for the one o’clock news. The idea of span and reach is very important. It tries to ring out some song, some . . . poem. Aria. Hymn. I’d go with all of those.”