Memoirs of a Polar Bear review: an animal for remembering 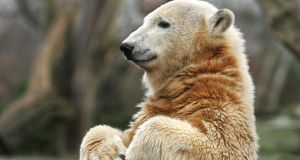 Knut the famous polar bear at Berlin’s zoo. He died suddenly and prematurely in 2011, at the end of what animal welfare groups said was an unhappy, short life. Photograph: John MacDougall/AFP/Getty Images

A newly discovered passion for Latin American dancing results in serious knee injuries which end the career of a talented circus performer. “Ordinarily they would have just shot me, but I got lucky and was assigned a desk job in the circus’s administration office.”

In the opening sequence, the first of three, in Japanese German writer Yoko Tawada’s playfully direct, dream-like, family saga-with-a-difference, a singular female not only tells her story, she writes it all down and creates a bestselling memoir almost by accident.

Chance changed her life. Instead of rehearsing routines for audiences in the Big Top, she now attends boring conferences. Alone in her hotel room, she takes to writing as a way of clearing her mind. Before long she is in the control of Sea Lion, an unscrupulous publisher keen to exploit her. He fails to inform her that an extract is to be published. The last copy of the magazine is sold shortly before she arrives at the shop. Luckily the actor who bought it is appearing in the theatre across the street. Our heroine dashes off and settles into a production of a Chekhov play. “The performance was delectable. The part I found the most appetizing was the dead seagull on the stage.”

This is understandable: the narrator is a polar bear. She is also Russian, lively and opinionated, as well as wary of being in West Berlin. Tawada, who was born in Japan in 1960 and moved to Germany at 22, writes in Japanese and German. This work has been translated from the German by the gifted Susan Bernofsky and it is worth noting that although Tawada is strongly influenced by Kafka, her prevailing literary mentor is Bulgakov, with obvious traces of Gogol. The narrative moves between the first and third person voices, and also from animal to human perspectives. Animals, it seems, are ethnic minorities.

It is all calmly offbeat and conversational, yet the subtext is philosophical, political and often profound. For all the humour and absurdist flourishes, Tawada is not writing a comedy. Our polar bear heroine, who uses an ATM machine, lives through her acute sense of smell and responds to temperature. On being introduced to Canadian salmon, she asks about the country and on being told it is very cold, remarks: “When I heard that, I wanted to move to Canada right away.” The German winter is too warm for her. “I dreamed of a frozen city in which the walls of all the buildings were made of transparent ice. Instead of cars, salmon swam through the streets.”

From the memoirist with her interest in bicycles and socialism, the attention moves to her daughter, Tosca, a ballet dancer whose physical size has proved a hindrance, denying her her rightful place in Swan Lake. She too becomes involved in the circus life. The middle section is shared somewhat dreamily between Tosca and her kindred spirit, Barbara, whose life has been devoted to the circus tradition. In the course of developing an act, bear and woman become very close.

Their bond is touching, and their communication is instinctive as well as tactile. Their act is called “The Kiss”. The tenderness they share is contrasted with the more bombastic approach of the other nine polar bears who had been recruited. These bears quickly formed a union “and could deliver political speeches in fluent German.”

It may be that Tawada is exploring love at its most devouring, manipulative and dominating. The bonds the animals establish with humans are based on them being trained to perform unnatural tricks. But then, as is pointed out, the animals are also described as having come from distant lands when many of them have been born in the zoo in which they are held and will never experience their natural habitat. Tosca is complex, her love for Barbara is deep and in time she will mourn her. Yet when she is delivered of twin cubs, she rejects them and does not react when they are removed from her enclosure. One of them dies. The other becomes very famous, initially for having survived, and then for having died suddenly.

At this point Tawada draws the book into a far more deliberate, and meaningful work. This surviving cub is given a chance to live through the support of the public who object to the zoo’s plan of having him put to sleep as orphan polar bear cubs rarely thrive. “Live!” is the outcry. He is named Knut, raised by hand and there is a detailed account of the efforts made to help the little animal. Polar bears are surprisingly small at birth. Matthias, the zoo-keeper, devotes his days to feeding Knut and making him feel safe and secure. Human company is all he knows, and the public enjoys watching him at play with Matthias whom Kunt sees as his mother. He grows quickly and, eventually, accidently wounds his keeper. “The day I was scared to death of overtook me without any warning.” It means the end of their fun – and of their relationship.

The artificiality of Knut’s existence is obvious. The real Knut was born in 2006 and died aged only four of a brain virus. Tawada’s subtle polemic is sympathetic not hectoring, but her point is clear. The happy little bear becomes depressed and hears that Matthias has died of a heart attack. The public lose interest in Knut. He now has time to wonder about Tosca’s rejection. He also comments on the way in which “the circus protests against every injustice in Nature. The magician makes his bowler hat give birth to doves. The acrobat leaps from one branch to the next even though he wasn’t born a monkey. The wild- animal trainer forces creatures afraid of fire to jump through a flaming ring.”

It is a book which begins as a delightful role reversal rich in physical sensation and whimsy, yet the intense emotion and powerful sense of justice suggest that Yoko Tawada believes that engagement is the most effective method of communicating the distorted mirror through which we look at the world.

Eileen Battersby is Literary Correspondent. Her debut novel, Teethmarks on my Tongue, is published by Dalkey Archive