A sample from the Canadian-Irish writer’s second novel, shortlisted for the Goldsmiths Prize this week and given rave reviews by The Irish Times and others 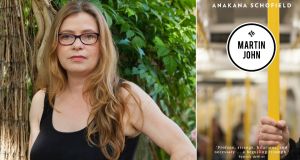 Mam repeatedly asks whether or not he can hear her – d’ya hear me Martin John? Because we can assume she doesn’t feel heard. She doesn’t want to hear what it is he would say, if he were to speak the truth. She saw a man on telly once. She has seen plenty men on telly, but this one frightened her. She has seen many men on telly who frighten her. But he frightened her in a particular way. He frightened her the way she feels frightened when she sees someone lash out at a dog. In actual fact, she’s not a woman easily frighted. The dark, insects, vermin, death, moths in the flour – none bother her.

But a glance, a moment, in which there’s an indication of what might be the truth of a person sits longer at her. A rat would run under the cupboard sooner than look at you. A man or woman who lets a boot fly at a dog or throws an item at a chicken in their way has a raw and sealed-in-something that she’s convinced can never be dislodged. That man on the television made her afraid because she recognized something of her son in him. There were many who talked of their crimes in that programme. They talked like they were uncomfortable ingredients in a recipe. Something hard to shop for like chopped walnuts, ground lemon rind or tamarind. They used the names of the crime, I murdered, I raped, I killed, I punched. Not him. The details are gone. He talked above and around his crime. He remained oblivious or chose oblivion. He was unsure why he was in here. He did not say he hadn’t done it. He did not say it was a mistake. He merely said nothing either way. They showed this man beside a man with a long ponytail, who said he had opted for chemical castration and then physical castration. He was the only one in that prison program who had availed of it. She thought of a small boy, being born, riding a trike, building a fort and then flash-forward all these years. She wondered if that boy building an’ deploying could ever image-forward to the man they might grow up to be. Was it that she thought criminals should suffer unto perpetuity? She thought maybe it was.

Then she pushed it all aside. It was distressing that a stranger, in another time zone, filtered through a televisual tube, could induce this in her. She returned to it being a mistake, a misunderstanding, messing gone wrong, (boys get up to stuff), which it was. Martin John was young and it was only messing.

If people coming down a televisual tube were going to disturb her it would be a long disturbance.

She did not like the idea she had a role in it.

You would not like the idea you had a role in it.

Did she have a role in it?

Have you had a role in it?

Do you have a role in this?

These are some of the questions a mother may ask herself.

Another interview, Tuesday morning radio this time, had her by the ear. An interview with a former drug-addicted mother, who wondered if the fact she was an addict was the reason her son grew up to become a drug dealer and robbed a post office in Kiltimagh. It was a strange place to rob a post office, said a priest who happened to be in there trying to buy a stamp. They wondered if her son did it because he’d been watching too much American television. The mother admitted the son glamourized his violence and boosted his profile with the words that the “feds” were after him. The mother admitted she thought the “feds” was a parcel company. I thought he thought he was being chased by the post office. I see different now. How did he get there, the priest on the panel asked. He took the bus, the radio-mother said. The woman interviewing them all said words like Now I realize this is very difficult for you all.

Except it wasn’t difficult for the priest. He was not at fault. Nor was it difficult for the Minister of Justice who was on the line. The only person it was difficult for was that mother with the veins from which her son had grown and robbed a post office. There was an advert where the radio-mother spoke to tempt the audience to keep listening, I botched up motherhood her voice said. Find out after the break, Did she botch up motherhood? annunciated the presenter. Martin John’s mam turned the radio off.

As Martin John’s mam hears the former drug-addicted mother puzzle it out, she recognizes there are many mothers out there puzzling things out. She will have to be a mother who puzzles. Except she is not the type who puzzles. She prefers to head, bang, to a conclusion. In this case: I was not that mother. I am not that mother. I didn’t raise my son to rob a post office. So what did she raise him to?

She prays hard. She incants for him. Once she prayed to St Jude, a man who fell in his own way, so he’d understand this overwhelming need to keep her son straight. I can’t afford no three-time-cock-crowing with Martin John, one more crowing and it’s prison he’ll be.

Everything I do and have done is to keep him on the outside. Sure if it’s in he goes, they’ll kill him. Plain and simple. They’d eat him alive, they don’t spare the like of him. Someday he’ll come home to me. He’ll come home when he’s failing or an old fella and I’ll be waiting.

She doesn’t want him near her.

Some days she dreams/imagines/fantasizes he might be killed. Shot or run over by a bus.

Like them fellas you read about in the papers.

Martin John’s not as bad as the ones they kill.

She reminds, comforts herself.

Martin John by Anakana Schofield is published by And Other Stories, £10