Earnest novel weighed down with similes 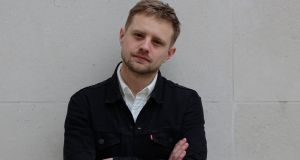 Patrick Langley’s debut novel tells of an unnamed city in the throes of political unrest. It is low on abstraction and high on visuals: there are lurid sunsets, smouldering glows and smoggy urban vistas aplenty. The atmospherics recall the dystopian cinematography of Blade Runner: “A smoke grenade hisses nearby, thickening the air with eruptions of lilac. Lamps darken and distance dissolves.”

Priced out of the city, the poor and dispossessed have moved to the outskirts and set up makeshift, favela-style dwellings amid the detritus of environmental degradation. The two protagonists, brothers Jackson and Frank, requisition an old abandoned barge and embark on an itinerant existence on the city’s canals, “Drifting where the waters guided them, unwatched, directionless, free.”

The descriptive set-pieces that sustain Arkady’s filmic aesthetic border on the florid. The superabundance of similes is so striking it can only be deliberate: we encounter – and this is only a sample – an empty apartment block “inert as a headstone against the sky”; pavements that “teemed like virulent petri dishes”; a darting mouse “swift and silent as the shadow of a bird”; a broken bottle that spins “like a Catherine wheel beside a burning banner”; tents in slum dwellings that “flourish overnight like nocturnal flowers”; a camera with a “glossy lens like a crow’s black eye”; a burning roof that “blazes like the head of a match”; a river whose flowing water “flashes like a turning knife”; overgrown vines that have formed “thick webs like optical nerves”; and a memory that “sticks . . . like a shard of bottle-glass in river mud”. The city itself “glimmers like a spillage of quartz”.

The saving grace is that the reader is never bogged down in these passages for too long. Arkady ticks along at a good pace, and when Langley isn’t painting elaborate tableaux he is a brisk and engaging storyteller. The brothers’ backstory is absorbingly told in a flashback section at the start of the book: their mother disappeared in mysterious circumstances when they were very young, leaving Jackson to raise Frank pretty much by himself. This tender portrait of fraternal devotion – the older sibling combining the roles of “brother, parent, instructor, friend, protector, rival, nurse” – forms the story’s emotional centre. Frank recalls that “Jackson once said that two people could make a society. The way we were with each other, the way we behaved, could set the conditions for it”.

It is a pleasingly anomalous motif for such an ostensibly political novel. Against a backdrop of class warfare, finding strength in blood ties is about as counter-revolutionary as it gets. Moreover, the protagonists’ political idealism is mitigated by ambivalent digs at the anti-capitalist milieu: the brothers are irritated by the interminability of activist meetings organised on non-hierarchical lines; when Jackson meets a swaggering, tattoo-ridden dissident with an unmistakable public school accent, he has to repress the impulse to hate him. The prevailing tenor is one of scepticism and brooding fatalism rather than rabble-rousing polemic.

If Arkady isn’t preachy, it is nonetheless deadly earnest in its timely evocation of social strife

If Arkady isn’t preachy, it is nonetheless deadly earnest in its timely evocation of social strife at a time of increasing political polarisation. The novel’s preoccupation with the invisible socio-economic topography of the city (“maps of ownership, maps of property, maps of power”) will resonate with anyone who has pondered the vexed question of gentrification and housing inequality. We are thankfully a long way from riots, rubber bullets and extra-judicial detentions, but Langley’s bleak vision of a city effectively at war with its inhabitants – on behalf of the property moguls and financial speculators who own it – is a pointed extrapolation of the present state of things.