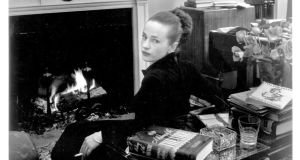 Few writers possess the daunting mixture of resilience and vulnerability that Maeve Brennan brought to a small but powerful body of work, comparable to that of Jean Rhys. Brennan, author of The Springs of Affection (1997), who was born 100 years ago on January 6th, 1917, had presence, wit, exactness and plenty of irony balanced by defiance. Yet the overwhelming mood is of wry melancholy, if never self pity.

The Long-Winded Lady, her writings from The New Yorker, is not easy reading. It is the third time I have read these pieces and for me they remain unsettling, and a bit too cool. On my first encounter with them as a postgraduate student in the 1980s I remember thinking that she wasn’t as funny as Dorothy Parker, although she was obviously as lonely.

Long years later the late Clare Boylan, a gifted writer and perceptive reader, expressed this so well in her beautiful introduction to the posthumous publication of Brennan’s finest achievement, The Visitor, a novella discovered as an 80-page manuscript believed to date from the 1940s which was in the archives of Notre Dame University library, apparently denoted in 1982.

It was published in 2001 by Irish publisher New Island Books to a grateful and international reception by readers of Brennan’s wonderful short stories.

“The word ‘lonely’ tolls like a solitary bell throughout the pages of The Visitor,” wrote Boylan. “Brennan doesn’t just write about loneliness. She inhabits it. She exhibits it. She elevates it to an art form. The shy, the dispossessed, the dominated, are seen not in the world but teetering on some perilous rim of it, from where they cannot possibly keep their balance but have a unique view.”

Many of the pieces in The Long-Winded Lady evoke an image of Brennan wandering through New York, particularly Manhattan, alone and often on her way back to whatever hotel she was then living in.

On a human level it is very upsetting, particularly as the facts of her life are known. She barely touches food, smokes, drinks, and seldom speaks to anyone. There is minimal reported speech. Her view of the world is seen through the windows of hotel rooms, restaurants and bars. There is no agony, she never presents herself as distraught and weeping, unlike Rhys in that.

Instead she has the discerning detachment of fellow literary exiles, Elizabeth Bowen and Canadian Mavis Gallant, while no one could dispute that Brennan’s Dublin stories are best compared with James Joyce’s Dubliners.

As a columnist she is different; more formal, less compelling, as if the exquisite intensity she brings to her fiction with its interior life is not quite entirely engaged when the business of being on the lookout for the strange and different.

Her despatches from the battlefront of daily life as observed tend towards the clinical: “There is a man around this neighbourhood who is always combing his hair. Once I saw him borrow a comb from a very small shoeshine boy. Then, while he combed his hair, combing it with one hand and smoothing it with the other, he bent and looked into the child’s face as though the little face were a mirror – only a mirror, and nothing more than that.”

Fascinating how the use of that “little” softens the tone. Brennan continues by adding that she is watching them from her eyrie: “I am eight floors up in one of those old hotels that line the shabby streets off Broadway. ”

Elsewhere she notices a man, “astonishingly tall, thin . . . in a blue suit, and he had his head and shoulders thrown violently back. His face was turned up to the sky. He had only one leg, and his crutches, which were like stilts, were both braced in front of him so they slanted back as he did. He was at a dangerous angle, as if he were falling slowly backward, but he did not fall, although it seemed that he might be thrown with each new effort he took to send his voice up . . .

“He paid no attention to anyone. All those about him seemed to be standing on solid ground while he was at the Edge, but although he was making no sense, he seemed to be making more sense than those who were laughing at him, and they, of normal height and standing on two legs, seemed more grotesque than he.”

Home is always a hotel room, or so it would seem from The Long-Winded Lady. But that is not so, “Home is a place in the mind” she wrote in The Visitor. “When it is empty, it frets. It is fretful with memory, faces and places and times gone by. Beloved images rise up in disobedience and make a mirror for emptiness.”

She had a philosophical, questing intelligence and it has a habit of striking one unexpectedly: “There is nothing like a short walk through this city [New York] to remind us of the accidental nature of our lives.”

As always the enigmatic Brennan with her flair for the quick punch then resumes, in The Traveller one of the best pieces in the book, to recall how on commencing her walk at 44th Street and Second Avenue, she narrowly avoided getting killed by “an overexcited motorist who was taking the corner too fast”.

In another piece, dated August 27th, 1960, she overhears two women discussing the then senator John F Kennedy whom they are referring to as young. He was then 43, the same age as Brennan was at the time; they were born in 1917.

The discovery sets Brennan to thinking about how being no longer young suddenly can become young in a different context. There is a bizarre account of happening upon Julie Andrews who was eating a sandwich and apparently glowered at Brennan for daring to intrude.

“All her attention was on her sandwich, which she picked up with both hands . . . when she saw me standing and staring at her . . . At the sight of me, Julie Andrews froze in fury. Behind her sandwich, she was at bay, her hungry face glazed with anger.”

It seems an unlikely and out of character response for Mary Poppins and it does give the impression that the actress may well have been feasting on a slab of raw meat. Brennan is often a bit sardonic when describing humankind.

Also included is the wonderfully poignant A Daydream, written in 1976, in which she recalls her time spent living in East Hampton. She is dozing on the beach, and she seems so happy: “The cats and my dog, Bluebell, walked over here with me, but two of the cats dropped out at the walled rose garden . . . Bluebell is down by the water. She is a black Labrador retriever, and she swims and rolls in the water and watches for a seagull to play with . . . ”

It is beautiful, only Brennan wakes up to her city life and realises her dog and the cats are long since dead. You wish for her to have stayed in East Hampton, far from her terse and solitary city existence.

For all her cerebral precision, as a fiction writer she engages the emotions with a finely tuned grasp of steel in a way these New Yorker sketches don’t fully convince.

One of my prized possessions is a US, Counterpoint edition of The Rose Garden, given to me by William Trevor who considered Brennan, “very good indeed”.