A Reluctant Memoir review: Portrait of artist as critical traditionalist 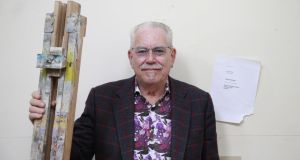 True art never has an overt design upon its receiver. “If I wanted to send a message”, said an American writer, “I’d use Western Union”. Yet art can raise awareness. There can be no more radical critique of the world than a truly accurate description of things as they are. For reality, as Robert Ballagh understands it, is both a site of injustice and a source of ultimate redemption.

Modernist artists despaired of ever competing with photography, but some of Ballagh’s paintings look far more uncannily and eloquently photographic than even the best photos themselves. His portraits of writers such as Hugh Leonard, Sam Beckett or James Joyce surround the subjects with props in a throwback to a mode of 19th-century narrative art, for his is an essentially theatrical imagination; and he instinctively understands Wilde’s dictum that only shallow people do not judge by appearances. Yet he is also an arrant modernist.

His memoir is reluctant but why then write a memoir at all? Presumably, because he knows that true intimacy is under attack in our postmodern society. He rejects the earlier Romantic idea of the isolated artist and wants to challenge conventional notions of privacy in a culture of manic “privatisation”. In a Ballagh painting, a surveillance helicopter can intrude on a tender domestic scene. The home, far from being a haven in a heartless world, reflects the dysfunction of a wider society.

Hence his obsessive interest in boundary situations – windows, doors, stairways. Art for him can never be a privileged refuge from reality but it is a vital part of it. His human subjects cannot be contained by wooden frames, but often seem to step out of them (like Gordon Lambert or John B Keane); or else they stand on actual as well as two-dimensional painted stones (as in the magnificent cruciform portrait of Noel Browne).

Now Ballagh has turned to the art of memoir. His writing is warm, wry and thoughtfully anecdotal. In those paintings which celebrate writers, he has often made their texts and books an intrinsic element of the picture; and in renditions of Irish landscape he has included a sub-script of Gaelic proverbs. For him there is no conflict between the visual and verbal. He has used the former to celebrate the latter; and now, in a deft act of inversion, he uses vibrant words to explain the development of his painting.

The cover depicts fragments from six self-portraits of the artist done in his 60s; and they are honest yet tender in registering the ageing process. Reproductions of many earlier paintings, supplied generously through this uncommonly handsome volume, show that the younger man always had a teasing interest in the varieties of self-portraiture. In one, his face is obscured (by a book, of course); in another, just his feet and legs appear; and in another again, he appears twice.

The hirsute, lapsed architectural student played for a time in a band (The Chessmen) before opting for a career in art. Although he had no formal art-school training, he developed rapidly from acrylic pop art through many styles and techniques to the mastery which has made his fame. He believes that his apprenticeship to Micheal Farrell, as well as a willingness to learn about paint from (for instance) humble tradesmen working on partition walls in a cafeteria, proved far more valuable than any academy might have been.

Like all geniuses, he is an auto-didact and learns new things with each task undertaken. Over decades he has designed our postage stamps and national banknotes, the settings for Riverdance and for productions by the Gate Theatre. He describes with humorous lucidity the processes by which he learned the intricacies of each of these arts. And, almost in passing, he explains his growing gift for the difficult feat of human portraiture.

Ballagh is, in short, a formidable example of the Multiple Self in art and in action. Which may help to explain the mysterious fragmentation of self-images on his book’s dust-jacket. Towards the end of his narrative, he quotes Lionel Trilling’s great book Sincerity and Authenticity. Sincerity – so beloved of Romantic artists – held that a person should be true to a single self-image. But exponents of the more modern notion of authenticity recognised that, in being true to a single version of self, a person might end up being false to several other facets of a full personality.

This is the danger in conventional autobiographies, which often give a coherent and-then-and-then account of the incidents of a life (bio), ignoring the interior modifications of thought over time (auto). Too many memoirs of footballers and rock musicians lapse into a mere recital of matches and gigs; however, the life of a person must tell not only the facts but the thoughts and feelings which give them meaning. Ballagh pays equal attention to both.

If, in one painting, Ballagh portrays his face obscured by the book he is reading, that is his invitation to the viewer to become an active decoder. And unlike most other artists, he is unafraid to offer some interpretative commentary on his own work.

There is a certain coolness about his wider social commentaries, which are half-shocked and half-amused by the folly all around him. He is himself an astute theorist of art. His deep respect for the classics and moderns is balanced by a healthy scepticism about the levelling effect of a postmodernism, whose one-thing-is-as-good-as-another philosophy chimed perfectly with market forces unleashed in the 1980s.

He has been one of the most caustic voices within an art world often fixated on money, yet he has taken commissions from business people whom he liked. The business person and the artist are brokers in risk – and both may have to spend months or years of exhausting work in validating an initial hunch – so the affinity is real. Ballagh writes with real respect for Gordon Lambert, Basil Goulding and Dermot Desmond, who facilitated his art but never encroached on its freedoms. He recognises what Charlie Haughey did for the arts, but laments his political corruption – and somehow his commissioned portrait of the Sage of Kinsealy captured that ambivalence even at the time it was executed. Ballagh celebrates socialist countries which made him and his work welcome over the years, yet despairs of the bureaucracy of many State agencies. He has opposed the denial of civil rights (to the northern minority, feminists, migrants, the ANC), yet he also also upholds jeopardised nationalist traditions (the meaning of the Easter Rising, Féile an Phobail in Belfast, commemorations of the Great Hunger).

He has been one of the most caustic voices within an art world often fixated on money, yet he has taken commissions from business people whom he liked

There is no contradiction in any of this, if you take Ballagh as what in India would be called “a critical traditionalist”. All anti-colonial intellectuals are at once defenders of threatened traditions and radical insurgents – a condition well-known to anyone in this country who has worked to improve the material conditions of artists. This Ballagh did in promoting the right of painters to some share in the profits on resale of their work. As long as he feels the need to invoke ideals of the 1916 Proclamation still unachieved, he will have the cachet of dissident.

Hence the paradox that Ireland’s most successful visual artist can also be one of its foremost critics. For, as WB Yeats said, whenever a country produces persons of genius, they are never quite like that country’s official version of itself.

Ballagh’s memoir ends with a fine tribute to his loving parents (tracing his contrarian spirit to his dad), but the book as a whole is a sustained meditation on life with his wife Betty, who died tragically in 2010. Her spirit as a child of the 1960s illuminates every page. It depicts the long, complex and beautiful relationship out of which so much art and so much fun emerged.

Declan Kiberd teaches at Notre Dame. His book After Ireland: Writing the Nation from Beckett to the Present is now out in paperback