Let’s redefine young adult fiction as books about young adults, but not just for them

Editor Niamh Mulvey: ‘Young adult fiction’ covers such a broad range that the only definition I find satisfying is this – fiction that features teenage protagonists 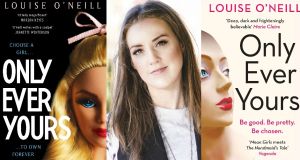 The cover of Louise O’Neill’s debut novel Only Ever Yours was redesigned, right, for the adult market. “While we publishers and retailers patiently put books in categories,” says her editor Niamh Mulvey, “they frequently burst out of these and disobey our tidy meta-data to find all kinds of unlikely audiences”

Since we published Only Ever Yours in July 2014, I have frequently been asked variations of the same question as to the intended audience of Louise O’Neill’s books: Are they for young adults or grown-up adults?

And because people often only ask you a question when they already have a strong opinion on what the answer should be, they might then say:

Only Ever Yours should be read by everyone!

Asking for It is definitely an adult novel. It’s way too realistic for teenagers!

Asking for It is definitely a young adult novel. It’s so realistic about teenagers!

3. And then there’s “content”. The sex and drugs and rock and roll, etc. You can’t have too much because it will scare off the retailers and the parents; but hell hath no scorn like a teenager patronised – so it has to be authentic. If you publish a book featuring teenagers who hold hands and drink hot chocolate, you might sell thousands of copies. To nine-year-olds looking for a safe version of being a teenager. But not to actual teenagers. Or adults.

4. Is there a love triangle? And can the heroine be damaged, but plucky? The ending is redemptive, right? Won’t someone please think of the children!

What all this boils down to is this: if you are publishing a young adult novel that you think has star appeal; a book whose protagonists are teenage but whose concerns and appeal are universal: well, then you hustle. You (and your poor, patient publicist) write to the YA fans, the YA reviewers and bloggers and enthusers. This is one of the most passionate and exuberant book communities out there and these people know their stuff. They recognise a real book when they have it on their hands and they will spread the word.

But you know that for a young adult novel to become proper big (the technical term), you need to get the adult readers on board too. So you write to adult reviewers who you know are open to young adult fiction. You send it to the women’s magazines. You write to the authors who you think will be interested in the themes of the novel – whether they write for teenagers or adults.

When it comes to the packaging and the cover of the book, you can drive yourself crazy thinking about all of the ifs and buts of the above. So in the end, you try to park all of that and come back to the book itself. What is its soul? How can I communicate that visually with wit and freshness? You look at blogs, Pinterest, album art, fashion, movie posters, TopShop adverts, whatever. You try not to look at too many other book covers as otherwise it will end up looking like too many other books.

In the end, with a book that does not slot neatly into one part of the market, you have to trust the book itself even more than usual. You do all you can to make its passage into the world a safe and fruitful one; you tell everyone it’s coming, you make it look as good as possible, but there comes a point where you have to wave your white handkerchief at it and let it go. If you were right (and you pray that you were), if it truly does have something to say, then it will find its place in the world. Sometimes that does not happen overnight. It can take months. Years even. And, sadly, some great books do of course fall into obscurity. (But the beauty of printed books is that they get around. You’ve no idea who might pick that book up 20 years hence in a second-hand bookshop in a backstreet in Sheffield or Mumbai or Ballina, and what impact it may have).

Quercus, the publisher I work for, has always published what your dad might call “edgy” teenage novels, if we take “edgy” to mean reflective of the lives actual teenagers actually live. Our long-time novelist Cat Clarke has written a string of utterly convincing and compelling novels about teenagers living in contemporary Britain, books that also found a lot of adult readers. Louise O’Neill is but a continuation of this tradition. We have another explosively brilliant novel about the experience of a young girl growing up in a strictly controlled religious family coming next year: In the Dark, In the Woods by American author Eliza Wass.

The term “young adult fiction” has come to cover such a broad range of books in recent years, that the only definition I find satisfying is this: fiction that features teenage protagonists. End of, really. The bildungsroman is a form that never gets old, and arguably a lot of feted literary fiction could easily be published as YA: I was happy to see Edna O’Brien’s Country Girls in the teen section of Waterstones recently. The Goldfinch – with its child narrator and teenage escapades – feels to me like the kind of book that will mean most to younger readers. Books only come alive when they are read and while we publishers and retailers patiently put them in categories, they frequently burst out of these and disobey our tidy meta-data to find all kinds of unlikely audiences.

Louise’s next couple of books are likely to feature characters who are older than the teenagers of her first two books, but that does not mean her fans have any reason not to read them. But I sense they will be as exasperatingly difficult to pin down and to define as her first two were – because good writing is often extremely difficult to categorise. And also, because she doesn’t like to make life easy for me.

Niamh Mulvey is Louise O’Neill’s editor at Quercus. O’Neill is moving to Quercus’ adult imprint with Mulvey, who takes on the role of senior commissioning editor of the adult list, the Bookseller reported last week. Mulvey signed world rights to two more books from O’Neill in a “significant deal” with Rachel Conway of Georgina Capel Associates. Quercus said they will still have “YA and crossover appeal”