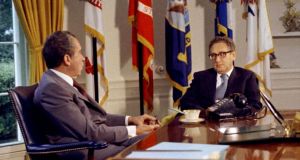 Former US president Richard Nixon and his secretary of state Henry Kissinger in the Oval Office on September 21st, 1973. Photograph: AP Photo

That Henry Kissinger is – and will remain – a controversial figure is certain. As national security adviser and secretary of state under the US presidents Richard Nixon and Gerald Ford, Kissinger was involved in some of the most controversial issues of his day, including Nixon’s decision to invade Cambodia in 1970, extend US military involvement in Vietnam in pursuit of what was called “an honorable peace” and encourage the overthrow of the Marxist Chilean president Salvador Allende in 1973.

On the other side of the ledger, Kissinger is also credited with negotiating the first strategic arms limitation agreement and the Anti-Ballistic Missile Treaty with the Soviet Union opening the much heralded door to US relations with communist China and with negotiating an end to the 1973 Yom Kippur War, among other accomplishments.

Kissinger’s involvement in these events has, of course, led to a great deal of speculation among historians about his exercise of diplomacy. In virtually all of these assessments, it is argued that Kissinger must be regarded as a classic practitioner of realpolitik, a man for whom securing US national interests took precedence over all else.

But the view of Kissinger as the archetypal realist is challenged in the first volume of a massive new biography by British historian Niall Ferguson. As indicated by the title, Ferguson rejects the notion that Kissinger became a kind of 20th century Bismarck, a Machiavellian practitioner of power-oriented policies who, to quote another author, invariably placed the “demands of state above other ethical scruples”. This deeply rooted view of Kissinger as “an amoral realist” unwilling to sacrifice “one iota of American interest” in the practice of foreign policy is, according to Ferguson, wrong.

Far from being a realist, Ferguson insists Kissinger is quite the opposite: an idealist, a man whose life experience in the decades before he entered high office brought him to the realisation that realism in foreign policy is fraught with perils, not least because of its potential to alienate the public but also because of its potential to drive the statesman into regarding “power as an end in itself”.

Ferguson’s work is unique in devoting a great deal of time to Kissinger’s early life. In the first three chapters of the book, he provides a fascinating look at the social history of Kissinger’s German-Jewish background, including an examination of the religious and cultural milieu of Kissinger’s native Fürth in Bavaria, his family’s narrow escape from Nazi Germany in 1938 and the challenges faced by an Orthodox Jewish refugee family living in New York City in the late 1930s.

It is not until Kissinger is drafted into the US Army at the age of 19, however, that the work truly begins to focus on his life experience. What emerges from this first of five “books” that make up Ferguson’s manuscript is Kissinger’s somewhat studied ambivalence about his heritage.

Indeed, he appears remarkably free of the bitterness one might expect from a German-Jewish soldier who had returned to liberate his former homeland from the Nazis. This is not to say Kissinger was not profoundly affected by what he witnessed. But taken together, Kissinger’s experience in Germany, both as an adolescent witness to the collapse of the Weimar Republic and the rise of Nazism and later as an officer in the US Counter Intelligence Corps charged with the denazification of the population in 1945-46, did not seem to affect him in the way that has often been speculated on by those who have only taken a superficial look at the early stage of his life: making him deeply sceptical of democracy. Perhaps the most significant aspect of his army career, as Kissinger himself notes, is that it made him “feel like an American”.

From this fascinating opening, Ferguson goes on through the remaining four “books” to explore Kissinger’s tenure at Harvard – where he discovered the importance of “philosophical idealism and historical knowledge”, and the various stages of his pre-1969 career. Throughout these sections, Ferguson focuses almost exclusively on Kissinger’s interaction with the major foreign policy issues of the early to mid-1960s: as an on-again, off-again consultant for the Kennedy administration; as a specialist sent to Vietnam at the behest of the US ambassador; and as a special envoy involved in the Johnson administration’s attempt to establish secret back-channel negotiations with the North Vietnamese in Paris in 1967, before the final tumultuous year that was 1968.

Even though Kissinger’s involvement in the exercise of foreign policy in the Kennedy and Johnson administrations was largely confined to the role of part-time consultant, often on the periphery of the heady events taking place in Europe and Asia, Ferguson still manages to tell us a good deal about the difficult issues confronting those in charge of the US’s foreign policy.

Much of this is due to the extraordinarily research that Ferguson undertook in preparation for this volume, which includes historical material drawn from no fewer than 111 archives scattered throughout the world, and most importantly, access to Kissinger’s personal papers.

Thanks to this abundance of evidence, we see that Kissinger was an early advocate of nuclear nonproliferation and superpower diplomacy, that he was one of the first to recognise the impossibility of a military victory in Vietnam and that he became an advocate for a negotiated settlement as early as the mid-1960s.

However, the evidence also shows us a far more dangerous side to Kissinger’s idealism: his conviction, for example, that the Kennedy administration should stand by democratic principles and refuse to acquiesce in the Soviet determination to construct the Berlin Wall, even at the risk of limited nuclear war and with the full knowledge that this could ultimately lead to a full-scale conflagration.

Ferguson attempts to soften the implications of these revelations by arguing that Kissinger’s belief in such a strategy was based on the assumption that the mere threat of such a move would be enough to give the Soviets pause. He also says we should not forget that the cold war was in fact a war and that viewed in this light, Kissinger’s advocacy of a strategy based on limited nuclear war – as posited in his 1958 book Nuclear Weapons and Foreign Policy – takes on a far less alarmist character.

These cold-war assumptions certainly apply to the superpower confrontations over the position of Germany in Europe or the placement of Soviet missiles in Cuba, but they are far less certain when it comes to the decades-long conflict in Vietnam, which in essence was a struggle for national independence.

That victory in such a struggle was ultimately impossible – even for a nation as powerful as the US – is perhaps best articulated in a comment Kissinger made in a memo he sent to Nelson Rockefeller in his role as Rockefeller’s principle adviser on foreign policy in his drive for the presidency in the spring of 1968. Kissinger cautioned against “interminable” commitments in any future conflict. Indeed, he went on, “before we commit even small forces, all the far-reaching implications of this fact must be faced as they were not faced in Vietnam. We must not find ourselves with a commitment looking for a justification.”

This is an important book that tells us great deal about the complexity of the issues confronting those in charge of US foreign policy during some of the most trying years of the cold war. It is also extraordinarily well researched, which in many respects is the work’s greatest strength, but also its greatest weakness.

One gets the sense reading it that Ferguson is building towards some sort of grand revelation about the true nature of Kissinger’s character, and while this possibility forms an intriguing aspect of the chapters dealing with Kissinger’s wartime experience and his first years at Harvard, the author’s ability to carry the reader along this path becomes more difficult as he wades his way through the detailed and ever more complex machinations of Kissinger’s activities as a policy adviser.

It is almost as if Ferguson has become seduced by his access to Kissinger’s papers. With so much attention on this enormous amount of documentary evidence, Kissinger’s views and voice too often become fragmented, making it harder to follow the development of his train of thought as he observes the world around him.

It is this quality that above all else makes the epilogue at the end of the book so disappointing. Instead of taking the time to reflect on the overall meaning of his manuscript or to engage in a more profound analysis of Kissinger the man on the eve of his entry into the halls of power, Ferguson instead reiterates many of the same isolated points – and quotes – that are stated earlier in the work, leaving his readers somewhat unsure of what to make of it all.

One also gets a sense, reading this reiteration of Ferguson’s case, that this is a book written on the defensive, as if the author had to provide overwhelming evidence to prove his essential point: that the young Kissinger was above all else an idealist. In this, Ferguson may well have succeeded, but without a deeper understanding of the essential nature of his subject’s character – his doubts, fears and hopes for the future – it is hard to know what, if any, significance this fact will have for his future conduct.

Perhaps the author should have taken a bit more heed of the advice proffered by James Boswell, whom he quotes at the outset and whose Life of Samuel Johnson still stands as the most celebrated biography in the English language: to see his subject “live, and to live o’er each scene with him as he actually advanced through the various stages of his life”. To view his subject “as he really was; for I profess to write, not his panegyrick, which must be all praise, but his Life . . . ”

Unfortunately, for that, it appears we will need to wait for the second volume.

David B Woolner is senior fellow and Hyde Park resident historian at the Franklin and Eleanor Roosevelt Institute, New York