Kazuo Ishiguro deserves Nobel prize but others deserve it more

John Boyne: He’s a supremely talented writer, but Atwood and Banville have a greater claim

Kazuo Ishiguro has been named winner of the 2017 Nobel prize for literature. The English author has written eight books, which have been translated into over 40 languages. Video: Nobelprize.org 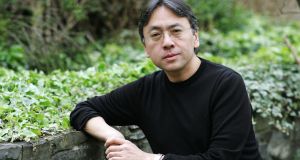 About 10 minutes before the announcement of this year’s Nobel Prize in Literature, I was sitting in my garden, reading, when a question popped into my mind: if I could have written someone else’s novel, which would it have been? And my first thought was The Remains of the Day.

I worked in a hotel in London the summer of my Leaving Cert and vividly recall reading that book, which had just been published a few months earlier, and being astonished by the elegance of the writing, the myopia of its narrator, Stevens, and the author’s depiction of appeasement in the months leading up to the second World War.

Kazuo Ishiguro is a most surprising choice for this year’s Nobel Prize – I didn’t see his name listed anywhere as a potential winner – but it’s hard to argue with his elevation to laureate status. His first two novels, A Pale View of Hills (1982) and An Artist of the Floating World (1986) examine the changes in Japanese society since the war but also serve as elegiac novels of memory, featuring central characters who both regret the mistakes they have made in their lives and only now, in old age, feel able to take responsibility for their errors.

In some ways, The Remains of the Day serves as the third point of that trilogy for, even though its narrative voice and location are poles apart, the themes of his early work reached their zenith with that Booker Prize-winning novel.

Ishiguro’s fourth novel, The Unconsoled (1995), was viewed as a disappointment at the time but its reputation has increased steadily over the years. There’s a conscious debt to Kafka in his portrait of a pianist struggling with a sense of dislocation in central Europe and it’s certainly one of those books that needs time and distance to be fully appreciated. I didn’t enjoy it much on first reading but returned to it some years later and admired both the experimental nature of the writing and the author’s willingness to challenge the reader’s preconceptions.

Perhaps conscious of the negative response to that novel, however, Ishiguro was far less rebellious in his next book When We Were Orphans (2000), a minor work, before venturing into speculative fiction with Never Let Me Go (2005), an unsettling story of young people reared specifically as organ donors.

As with the best works in this genre – think Margaret Atwood’s The Handmaid’s Tale – the novel’s power comes from the realisation that the absurd premise is surprisingly credible.

The only work of Ishiguro’s that I didn’t get on with was his most recent novel, The Buried Giant (2015) which, frankly, baffled me and had one too many ogres for my liking. It felt sprawling and confused, lacking in any central narrative that might engage the reader. When a great writer takes 10 years to produce a novel, one hopes for something a little less Tolkienesque but, it must be said, it has its supporters and perhaps in time, as with The Unconsoled, my view will change.

So, does he deserve the Nobel Prize? Well, yes and no.

Yes, in that he’s a committed and supremely talented writer with a fine albeit relatively small body of work, and there’s no question that several of his novels are modern classics.

And yes, in that he writes actual literature and not songs.

But no, in that there are writers with a far broader oeuvre, many of whom have embraced more diverse themes and offered us a more substantial library over their careers. Atwood would have been a fine choice, for example. It’s hard to think of someone who has combined the political with the poetic over so many decades quite so well.

National loyalty aside, John Banville is simply the finest writer at work today, a prolific prose stylist whose work has only deepened in quality throughout his career

And, national loyalty aside, John Banville is simply the finest writer at work today, a prolific prose stylist whose work has only deepened in quality throughout his career. Banville shares themes in common with Ishiguro, most notably his protagonists’ concentration on memory and regret, but I would suggest that his work has more depth and is infinitely more complex than Ishiguro’s. (Interesting point, Banville won the Man Booker Prize in 2005 for The Sea over the more fancied Never Let Me Go, so I suppose it’s one-all now.)

The name of Haruki Murakami is always mentioned at this time of year too but, for all his strengths, Murakami is really too populist a writer to earn Nobel status. His work is designed to please and he indulges his readers by repeating his most popular themes over and over.

But the winner of the Nobel Prize should not be slighted in comparison to those who might have won it. Ishiguro will make a fine laureate and, from one graduate of the University of East Anglia’s creative writing programme to another, it’s hats off.

And – another plus – unlike Bob Dylan, he’ll probably show up to collect the award in December.
John Boyne is the author of 10 novels for adults and five for children, including The Boy in the Striped Pyjamas. His latest is The Heart’s Invisible Furies