Tom DiCillo: the fabric of an artist 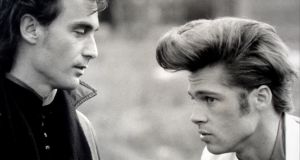 Tom DiCillo and Brad Pitt on the set of Johnny Suede

It’s been over 20 years since I first discovered a film called Johnny Suede, the 1991 picture directed by Tom DiCillo and starring Brad Pitt, Catherine Keener, and Nick Cave. I remember it like yesterday: I was on my school lunch break and wandering through the World Cinema section of Xtra-Vision in Naas trying to reach my usual haunt of the horror shelves – no doubt making a beeline for Freddy’s Nightmares once again – when I spotted this luminous video cover standing out among the selection of the more blandly designed sleeves. Johnny Suede vied for my attention and won.

It was normal for arthouse video distributors such as Artificial Eye and Tartan Video to use the same template design for all their VHS covers; that distinct but dull grey and white colour scheme and the uniform typeface, whether it was a Hal Hartley, an Ingmar Bergman, a Jean Cocteau or a François Truffaut. But some genius (I say that with sincerity) decided that for Johnny Suede they would go bold with vivid red, yellow and blue...garish altogether, and brilliantly so. Well, enough that it caught my attention to rent the tape, an arbitrary act which has resulted two decades later in the release of my book, The Cinema of Tom DiCillo: Include Me Out.

Up to that point I was an aficionado of Steven Seagal, the Cannon Pictures oeuvre, and low-budget horror films – I still am, in fact – but Johnny Suede introduced me to a whole other realm of cinema. Through its absurdist humour, well-wrought visual aesthetic and deftly surrealistic tone (I am loath to use the word “quirky”) and my resultant interest in this director Tom DiCillo, I discovered the alternative universe of independent film and world cinema.

It brought my attention to the Irish Film Institute, or the IFC back then, enamoured with its wonderful programming and amazing selection of silent and arthouse VHS titles (I paid £30 for DW Griffith’s The Birth of a Nation upon first visit...wouldn’t have found that in Xtra-Vision in Naas!). That Eustace Street enclave felt like a cinematic Shangri-la to this sports-and-school-shy film obsessive. This was a whole new world to me; it was exciting. It was DiCillo; it was Hartley; it was Buscemi; it was Araki, and Anders, and Jarmusch, and Solondz...God, we loved film then!

That mid-’90s US independent movement was an exciting time for cineastes. Looking back from a scholarly perspective, it feels to me to be the most fertile movement in American cinema since the New Hollywood happening of the mid-’60s to late-’70s. It certainly bred some of the most distinctive voices in US cinema of the last 30 years, some of whom (Quentin Tarantino, James Mangold, Steven Soderbergh, Robert Rodriguez) have gone on to work in the mainstream, while some gems of the era have become unfortunately forgotten or ignored (John Turturro’s Mac, Steve Buscemi’s Trees Lounge, Stacy Title’s The Last Supper, Michael Taav’s Painted Heart, John Dahl’s Red Rock West, to name a few).

To some, DiCillo peaked early with his second feature, the classic, definitive indie Living In Oblivion (1995), but to me his style and themes grew deeper and more resonant as his career developed with Box of Moonlight (1996), The Real Blonde (1997), Double Whammy (2001), Delirious (2006), etc; my fascination with cinema along with it. Even the director’s most recent films, which are works of non-fiction, fit thematically into his canon, continuing explorations of ideas that go back as far as Johnny Suede. When You’re Strange: A Film About The Doors (2009) is an electrifying feast of montage and music, while his brooding tone poem, Down in Shadowland (2014), is an exemplary lesson in no-budget filmmaking, a piece which recalls the haunting, hypnotising tone of Koyaanisqatsi.

At some stage early in my writing career, I had the opportunity to interview DiCillo, which, for me, was quite momentous. After discussing When You’re Strange for its imminent screening at the Jameson Dublin Film Festival, I mentioned to DiCillo that I had searched far and wide for analytical prose on his work for years to no avail. No biographies or scholarly tomes existed, so therefore perhaps I should write one. Sure why not?

Cut to several years later and I’m sitting in DiCillo’s Upper West Side apartment talking everything from his early years in a peripatetic military family, his influential work in the NYC underground No Wave scene which saw him assume cinematographer duties on films by Jim Jarmusch (Stranger Than Paradise, 1984), Bette Gordon (Variety, 1983), Eric Mitchell (Underground U.S.A., 1983), and then discussing his directorial work, which covers three decades of American independent cinema and some brief interludes with Hollywood studios.

What had erupted as an idea for an academically-inclined monograph supported with a Q&A between me and DiCillo eventually became something much bigger, and ultimately more approachable to the casual reader. My suggestion of bringing in Catherine Keener (the star of four DiCillo films) and Steve Buscemi (also four DiCillo films) resulted in many of the director’s collaborators joining the endeavour; and so the book includes exclusive interviews not only with DiCillo, Keener and Buscemi, but also Peter Dinklage, Sam Rockwell, John Turturro, Chris Noth, Maxwell Caulfield, Matthew Modine, Gina Gershon, Kevin Corrigan, Alison Lohman and members of The Doors (drummer John Densmore and guitarist Robby Krieger) and others.

The book now functions not only as a portrait of a life in the pictures, but as a frank examination of several periods of American cinema and the attendant complexities of its industry; we get to hear directly from artists who have experienced both sides of the film market: indie and mainstream. These contributors bring to the book great insight into DiCillo as an exemplary director of high repute and fierce resolve, their words and support invaluable, lending further authority to this story of an artist so dear to me, he who is single-handedly responsible for introducing me to the great art of cinema.

The Cinema of Tom DiCillo: Include Me Out is published by Columbia University Press and Wallflower Press. Wayne Byrne writes for Hot Press magazine and is a freelance film lecturer