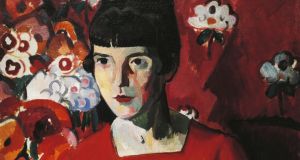 Book Title:
the edinburgh edition of the collected works of Katherine Mansfield Vol 1 & 2

Katherine Mansfield’s oeuvre is so varied that she can confuse her readers. Some, responding to stories such as The Garden Party or Her First Ball, regard her as breathless and arch, endlessly portraying fey young women with little hands in little muffs and the like. Others recognise in her long New Zealand stories the radiant touch of genius. Still others find her whimsical – but she was aware of her tendency in that direction, and tempered it so whimsy grows into a deep engagement with the more extraordinary aspects of ordinary life.

Mansfield suffered her first lung haemorrhage in 1918, after which she was determined to write as much and as well as possible before death overcame her. And in her urgency she was creating a new form, charged with immediacy and with the details of lived life. Her desire was “to push through the heavy doors into little cafés and to watch the pattern people make among tables and bottles and glasses . . . To air oneself among these things.”

Almost a century later Alice Munro, another short-story writer of genius from a colonial background, would write, in Family Furnishings, “Such happiness, to be alone . . . To hear from the back of the shop the sounds of the ball game . . . on the radio . . . [I thought] of the work I wanted to do, which seemed more like grabbing something out of the air than constructing stories. The cries of the crowd came to me like big heartbeats, full of sorrow.”

Here we find the same passion as in Mansfield to bear witness, to implicate oneself as a writer in the flux and flow of things while remaining aloof. Munro is celebrating a way to write – “This was what I wanted, this was what I thought I had to pay attention to, this was how I wanted my life to be” – that Mansfield had invented.

Her sense of the vast distance separating her from New Zealand – the knowledge she could never return there – makes the late stories burn with love and yearning even as her own life was guttering out. She was forever seizing on details of memory “out of the air”, as Munro has it. In the magnificent Prelude the kindly storeman “smelled of nuts and new wooden boxes”. And serious little Kezia asks him, “Do stars ever blow about?” Later, in the kitchen, “The water frothed up in the big soapy bowl with pink and blue bubbles on top of the foam.”

Prelude is quite well constructed, with its progress from day to night to day again, and with its recurring image of “rushing animals” and Linda Burnell’s dream of stroking a bird that “grew bigger and bigger” until “It had become a baby . . . ” And of course the aloe at the centre of the garden. Regarding it in moonlight, “‘Do you feel it, too,’ said Linda, and she spoke to her mother with the special voice that women use at night to each other as though they spoke in their sleep or from some hollow cave – ‘Don’t you feel that it is coming towards us?’”

What one remembers most vividly about Prelude, however, is not its elegant structure but its elegiac power and mystery.

Gerri Kimber and Vincent O’Sullivan, the editors of this excellent two-volume collected works, write in their introduction, “For the first time, the reader can follow Mansfield . . . as she alters, tacks, puts aside, mines an untried vein, works to break old habits, to drive through to new forms – the messiness of the workshop that surrounds the now established works.” And nowhere is Mansfield’s process of work more clearly depicted than in the notes accompanying The Aloe, which would grow into Prelude. “Mansfield realised . . . that to arrive at more than personal nostalgia called for a ‘kind of special prose’ ”, and via her own notes, letters and journal entries, as well as the editors’ incisive commentary, we are present while this “special prose” evolves.

Volume 1 contains four previously unpublished stories, including A Little Episode (1909), which she might have found lacerating to write, as it “conveys KM’s bitterness and disillusion following the musician Garnet Trowell’s abandoning her when pregnant, and her brief relationship with George Bowden, her husband of convenience”.

It is by no means among her best stories, but it illustrates her courage. Pregnant and forsaken, she was banished by her mother (who would cut Katherine out of her will) to Germany, where she lost the baby and plunged into an affair with a Polish writer, contracting gonorrhoea. Yet in the midst of these travails she managed to produce a story that coolly examines its heroine’s foolish attachment to the caddish Jacques Saint Pierre: clearly, her art was always her source and solace.

Indeed Mansfield’s brave if sometimes headstrong sexual adventures – and misadventures – result in stories of acrid power such as Je Ne Parle Pas Français, told by a sardonic little psychopath modelled on her onetime lover Francis Carco. This story is pronouncedly satirical, but it shines with pathos, and its sordid narrator is never merely a caricature. Mansfield also drew on her deep New Zealand memories to produce Prelude, At the Bay and The Doll’s House, all with children at their centre. Surely one must admire such diversity of voice and sensibility; it is hard to forgive Frank O’Connor’s blasting of her work on the grounds that lesbian tendencies corrupt the stories.

In truth Mansfield chose sexual freedom, just as she chose to live far from the provincial colonial society she would later write about with such yearning: courageous choices for a woman at that time, especially as if the Bloomsbury set were nasty towards one another they were doubly so to an outsider. Virginia Woolf laments, “I was jealous of her writing – the only writing I have ever been jealous of.” But in her insufferable, elitist way she also denounced Mansfield for being cheap and vulgar, smelling of scent.

Kimber and O’Sullivan have produced a work of superb scholarship that is clearly also a labour of love. Their Edinburgh Edition of the Collected Works of Katherine Mansfield, containing every fragment as well as all the finished stories (some rescued from the meddlesome editorial hands of her second husband, John Middleton Murry, and restored to their original state), undeniably establishes her as a great modernist writer.