Read an extract from Agent Running in the Field, which will be published next month 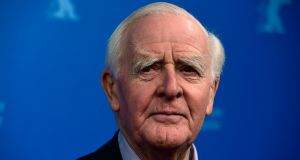 Just as intrigue over Brexit is expected to reach peak intensity next month, Britain’s master spy novelist John le Carré will be releasing a new novel, set in 2018, where the UK is ruled by “a minority Tory cabinet of 10th-raters”, and the country’s new prime minister Boris Johnson is at that point merely “a pig-ignorant foreign secretary”.

An early extract from Le Carré’s 25th novel, Agent Running in the Field, published in the Guardian on Saturday, shows Nat, a 47-year-old member of Britain’s Secret Intelligence Service (MI5), revealing his career choices to his daughter. As she picks away at his beliefs, Nat admits to serious reservations about the idea of England “as the mother of all democracies”, describing the country as in freefall, with “a minority Tory cabinet of 10th-raters . . . Labour no better. The sheer bloody lunacy of Brexit.”

Le Carré’s editor at Viking, Mary Mount, said that the novelist “doesn’t pull his punches” when it comes to Johnson.

“The thing about Le Carré is that he’s always been as much at home in Europe as Britain. A man with his experience of the cold war could not walk away from the divisions in Britain, and between Britain and Europe . . . After the referendum, there was no choice for him except to look at where we are now,” she said. “It is incredibly prescient, and a very emotional book in terms of how connected he feels to the history of Britain and Europe. There’s no looking away, he addresses the very current political crisis.”

Le Carré has long been a critic of Brexit, putting his name in May to an open letter in which authors urged readers to support the EU. But he has always been clear that “story and character must come first” in his novels – although he told David Hare in 2001: “I am now so angry that I have to exercise a good deal of restraint in order to produce a readable book.”

In Agent Running in the Field, Nat plays badminton regularly with an introspective young man, Ed, who hates Brexit and Trump and, said Mount, is “seeking a way to fulfil his ideals”.

“It’s not bleak because Le Carré does believe in the young in this book . . . there’s a sort of faith in certain kinds of idealistic people, so I definitely don’t think it’s his bleakest book. I think it’s ferocious about the political establishment, that’s where he puts real force,” she said. “He understands people’s motivations. He’s always been very good at human frailty. The thing I find most exhilarating is the way he sees through people, not just in a political sense. He gets to the nub of what people’s motivations are. And it’s very thrilling.”

Extract from Agent Running in the Field by John le Carré

‘Steff, there’s something about me that your mother and I feel it’s time you knew.’

She too is staring ahead of her. This wasn’t quite how I meant it to begin. Never mind. I say my piece as drafted, she listens. No eye contact so no stress. I keep it short and cool. ‘So there you are, Steff, now you have it. I’ve been living a necessary lie, and that’s all I’m allowed to tell you. I may look like a failure, but I do have a certain status in my own Service.’ She doesn’t say anything. We reach the top, uncouple and set off down the hill, still nothing said. She’s faster than I am, or likes to think she is, so I let her have her head. We meet up again at the bottom of the lift.

Standing in the queue we don’t speak to each other and she doesn’t look in my direction, but that doesn’t disconcert me. Steff lives in her world, well now she knows I live in mine too, and it’s not some knacker’s yard for Foreign Office low-flyers. She’s in front of me so she grabs the T-bar first. We have barely set off before she asks in a matter-of-fact voice whether I’ve ever killed anyone. I chuckle, say no, Steff, absolutely not, thank God, which is true. Others have, if only indirectly, but I haven’t. Not even arm’s length or third flag, not even as the Office calls it, deniable authorship.

‘Well if you haven’t killed anyone, what’s the next-worst thing you’ve done as a spy?’ – in the same casual tone.

‘Well, Steff, I suppose the next worst I’ve done is persuade chaps to do things they might not have done if I hadn’t talked them into it, so to speak.’

‘Arguably. Depends which side of the fence you’re on.’

‘Such as what, for instance?’

‘Well, betray their country for starters.’

‘And you persuaded them to do that?’

‘If they hadn’t persuaded themselves already, yes.’

‘Just chaps, or did you persuade female chaps too?’ – which if you’d heard Steff on the subject of feminism is not as light-hearted as it might otherwise sound.

We have reached the top. We again uncouple and descend, Steff streaking ahead. Once more we meet at the bottom of the lift. No queue. Until now she has pushed her goggles up on to her forehead for the ride. This time she leaves them in place. They’re the mirrored kind that you can’t see into.

‘Persuade how exactly?’ she resumes as soon as we set off.

‘Well, we’re not talking thumbscrews, Steff,’ I reply, which is pilot error on my part: Humour at serious moments is simply an escape route as far as Steff’s concerned.

‘So how?’ she persists, gnawing at the subject of persuasion.

‘And what ideal would that be exactly, Dad ?’ – from behind the shiny goggles. It’s the first time for weeks that she’s called me Dad. Also I notice that she is not swearing, which with Steff can be a bit of a red warning light.

‘Well, let’s say, just for instance, somebody has an idealistic vision of England as the mother of all democracies. Or they love our dear Queen with an unexplained fervour. It may not be an England that exists for us any more, if it ever did, but they think it does, so go with it.’

‘Well, who wouldn’t have, for Christ’s sake?’ I reply, stung by the suggestion that I’ve somehow failed to notice that the country’s in free fall. ‘A minority Tory cabinet of tenth-raters. A pig- ignorant foreign secretary who I’m supposed to be serving. Labour no better. The sheer bloody lunacy of Brexit’ – I break off. I have feelings too. Let my indignant silence say the rest.

‘Then you do have serious reservations?’ she insists in her purest tone. ‘Even very serious. Yes?’

Too late I realise I have left myself wide open, but perhaps that was what I wanted to achieve all along: to give her the victory, acknowledge I’m not up to the standards of her brilliant professors, and then we can all go back to being who we were.

At which I let out a merry exclamation that accepts honourable defeat while simultaneously asking for mitigation: ‘But they’re not innocent lambs, Steff! They volunteer. Or most of them do. And we look after them. We welfare them. If it’s money they’re after, we give them a pot of it. If they’re into God, we do God with them. It’s whatever works, Steff. We’re their friends. They trust us. We provide for their needs. They provide for ours. It’s the way of the world.’

But she’s not interested in the way of the world. She’s interested in mine, as becomes apparent on the next ride up: When you were telling other people who to be, did you ever consider who you were?’

‘I just knew I was on the right side, Steff,’ I reply. – Guardian