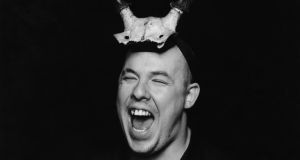 Two shocking events in 2011 and 2012 threw the British fashion designers John Galliano and Alexander McQueen into world headline news. One was McQueen’s suicide, in London, on February 11th, 2011, at the age of 42; the other was the dismissal of Galliano as creative director of Christian Dior after a drunken anti-Semitic rant in a Paris bar. These two trailblazing and influential talents shared similar working-class London backgrounds and both, though creatively different, had an ability to stage electrifying and mesmerising fashion shows.

Galliano, born in Gibraltar in 1960 into a devout Catholic family, was the son of a plumber who moved his family to south London to better their education. McQueen, born on St Patrick’s Day in 1969 of Scottish ancestry, grew up in east London, the son of a cab driver and a teacher. Both men had mothers who encouraged their love of fashion, and both discovered as boys that they were gay. Both wanted to revolutionise fashion, both attended Central St Martins art school, in London, both staged extraordinary graduation shows. And both were hard to handle.

In her new book on the rise and fall of these two driven and gifted men, Dana Thomas, who was Newsweek’s fashion and culture correspondent in Paris, charts their careers from penniless students enjoying the art and club scenes of London in the 1980s to the venerable ateliers of Paris couture – Galliano at Dior and McQueen at Givenchy. Both were hired by the French tycoon Bernard Arnault to beef up these old houses and turn them into multibillion-dollar global brands, giving the two Londoners huge salaries and limitless expenses. Some would later describe the arrangements as Faustian pacts.

It was a period when financiers such as Arnault and François Pinault – whose company owns the Gucci, Stella McCartney and Yves Saint Laurent labels – and started to grow their powerful empires, hoovering up small family ateliers, rolling out stores by the dozen and employing high-powered executives with no fashion-industry experience to come up with new marketing strategies.

In this maelstrom, creative designers became commodities to be moved around like chess pieces by the “suits” if targets were not met. Businesses with ever greater resources, Arnault once boasted, now acquired the ability to compete with states in Europe.

The wreckage, according to Thomas, was astounding. Marc Jacobs wound up in rehab twice, Tom Ford suffered depression after being removed from Gucci, Galliano’s assistant Stephen Robinson died of a cocaine-induced heart attack and the French designer Decarnin had a nervous breakdown. The pressures were enormous, the pace relentless. When Galliano started, in the mid 1980s, he produced two collections a year; at the time of his termination at Dior it was 32. “I can’t think of any other trade where every six months you have to come up with completely new ideas . . . that work, that dry clean, that won’t shrink, that make you feel beautiful,” he said.

It was all so different when they started. Galliano’s vision was a romantic one, his shows theatrical fantasies on historical themes, but there was a manic-depressive side to his nature and a complete lack of business acumen, according to Thomas, and an ability to party all night long.

Meanwhile, the graduation show of the Savile Row-trained McQueen, at 22, already revealed what would become his subversive, macabre vision and signature, tailored silhouettes, the frock and tailcoat. “I don’t think like the average person on the street. I see my work as classic tailoring with a hint of perversity,” he said. What made his name was a provocative collection called Highland Rape, whose torn, lace dresses, ripped clothes and jackets revealing naked breasts were derided as misogynistic. McQueen’s shows would continue to be controversial and often misunderstood right to the end.

What comes across in Gods and Kings is the decadence and excess during their period as superstars when their catwalk presentations were spectacular, their dresses were worn on red carpets and international sales were soaring. But Arnault put his foot down when Galliano staged a show that lasted 10 minutes and cost £2 million.

Galliano started losing support elsewhere, too. His fellow designer Miuccia Prada considered his work to be unconnected to real life. “I am much more interested in Alexander McQueen, because I think his vision is contemporary. His idea is also about fantasy, but they are more connected to the future than the past.”

But even though McQueen was shaking up Givenchy in audacious ways, the clothes weren’t selling.

The book tends to concentrate on the more salacious details of the designers’ private lives and drug addiction, going into distasteful and unnecessary descriptions of McQueen’s death. Although readable and fast-paced, the book lacks real understanding of their individual creativity in the face of extraordinary pressure and the flair and brilliance of their work. The dislike of Galliano is very evident.

The two designers are again in the news, with Galliano returning to fashion as creative director of Maison Margiela, following rehabilitation, and the opening next month at the Victoria and Albert Museum, in London, of Savage Beauty, the McQueen exhibition that drew record crowds when it premiered at the Metropolitan Museum of Art, in New York, a year after his death. This book is therefore well timed.