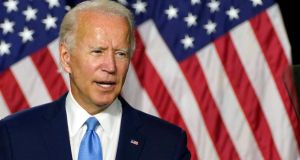 Joe Biden: lost his first wife and infant daughter in a car crash in 1972, and later lost his 46-year-old son, Beau, to cancer. Photograph: Carolyn Kaster

In October 2015, Joe Biden held a press conference in the White House Rose Garden. His eldest son Beau had recently died and  Hillary Clinton was considering a bid for president. Flanked by his wife, Jill, and President Barack Obama, the vice-president announced he would not be running to succeed Obama.

“He had run his last race, or so it appeared,” writes Evan Osnos. “But Biden’s life had often turned in directions that were difficult to predict, and it was about to turn once more.”

9 Messi’s red-card outburst the act of a desperate, hopeless man

13 ‘I got a burning smell in my nose’: Third-wave Covid-19 patients share their experiences

21 Letter from Saudi Arabia: ‘The Irish here are all in the same boat’

26 Homeschooling is an utterly unworkable solution for so many

29 Covid-19 advice sent by text to 1,511 arrivals from Brazil amid new strain

33 Breakthrough in treatment of breast cancer reported by RCSI researchers

34 ‘I’m the meme queen’: A QAnon digital soldier marches on

36 Away: After all those cheap and nasty children’s movies, here’s a gem

37 Five habits learned during the pandemic that we should keep

40 This warm, spicy stew can be rustled up in 15 minutes