The Dublin of 1904, when Ulysses is set, was a complex, compact city, explains Joseph Brady in this extract from Voices on Joyce, a book of essays published for Bloomsday 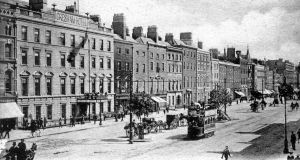 Sackville, now O’Connell, Street: The wealthy came to the city to work, to shop or, in the evening, to enjoy the many and varied forms of entertainment on offer in the city centre. By night, they returned to their comfortable suburbs, leaving the city to the poor 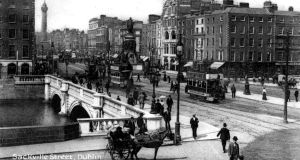 “The more elegant Dubliners rarely cross the O’Connell Bridge unless they are on their way to a race meeting in the Phoenix Park or being carried, toes turned up, upon their final journey to Glasnevin” – Douglas Goldring, 1917

James Joyce once declared that if Dublin “one day suddenly disappeared from the Earth it could be reconstructed out of my book [Ulysses]”. In one respect, it is easy to challenge this comment since Joyce did not describe the urban landscape in any detail and the reader gets little sense of what the streets looked like over 100 years ago.

At the same time, much of Dublin’s urban life is captured in Ulysses and in Dubliners and it is reasonable to argue that Joyce offers a sense of what life in the city was like; whether it is the interior of Barney Kiernan’s pub in Little Britain Street in the Cyclops episode or the sweaty world of Monto, the busy red-light district in the Circe episode. In addition, Joyce presents an accurate account of the geography of the city as experienced by his characters as they criss-cross through Dublin’s various streets. Of necessity, though, this must be an incomplete picture, for the Dublin of 1904 was a complex place, in some respects more complex than it is today.

Much of its complexity derived from the fact that it was a compact city and a great deal had to be accommodated in a small space. It was barely 4.25km from west to east and 3.5km from north to south. Dublin was a retail and commercial centre and, although never a great focus of heavy industry, there was an important brewing and distilling sector as well as the bustle of a busy colonial port.

The social geography of the city was more complex and it varied in time as well as in space. The city’s population was 245,001 in 1891, a small decline from the 1881 figure of 249,602. During the nineteenth century, substantial suburbs developed north and south of the Royal and Grand canals, which, together with the North and South Circular roads, essentially marked the boundaries of the city of Dublin.

By 1904 the greater part of the middle class had long forsaken the city of Dublin, leaving it to the lower social groups and, particularly, to a large population of badly-housed and poorly-fed people. Only the environs of Merrion Square, an area developed by the Pembroke family in the eighteenth and early nineteenth centuries, retained an air of higher status. But, even here, the poor were never far away. The separation of the middle classes from the city was more than spatial; it was also psychological. They lived in places apart from the city, and its problems and stresses were not theirs. Moreover, this spatial and psychological separation was compounded due to the fact that since the middle of the nineteenth century the corporation of Dublin had become increasingly nationalist in orientation while the suburbs retained a strong unionist character.

This is not to suggest that the more affluent among the populace had completely abandoned the city in all respects. By day, in fact, it played an important part in their lives. During the day, the paths of the middle classes intersected with those of the poor because the latter group was to be found in every part of the city. This was recognised by Charles Cameron, the city’s Chief Medical Officer, in his evidence to the 1885 Housing Inquiry. He noted that “some of the poorest and most decayed streets exist in actual contact with the most fashionable squares and streets. A wretchedly poor population, occupying decayed houses, inhabit the space between St Stephen’s Green and Fitzwilliam Square.”

It is possible to construct a number of different views of Dublin in 1904. On the one hand, it is legitimate to concentrate on the grinding poverty of many, but by no means all, of those who lived within the city’s boundaries. This is perhaps the dominant image of the city for the early 1900s. It is equally legitimate to speak about the elegance of Georgian and Victorian style streets, filled with leisurely and wealthy shoppers. These are the people who, as one 1904 guide observed, engage in shopping in the morning and in promenade in the afternoon. This was a small group in numerical terms but it was its members, through their economic and social power, who drove the economy of the city.

Then, as now, there were two main shopping districts. South of the River Liffey, Grafton Street was the primary shopping area but the district extended to Dawson Street on the east and South Great George’s Street on the west, the latter being much more of a commercial thoroughfare street than it is today. North of the Liffey, the primary axis of the shopping domain was Henry Street, where the best shops were; shops such as Brown Thomas, Switzers, Millar and Beatty as well as many costumiers and bespoke services. Sackville Street (later O’Connell Street) was well supplied with stores but it was not as important as a shopping area. Retailing spread beyond these core zones to a far greater extent than today and many other streets offered interesting shopping possibilities. The Liffey quays were important too, streets such as Brunswick (Pearse) Street had a significant retail trade, and many of the little streets in what is known as Temple Bar today provided a range of goods and services. The existence of two retail cores with a duplication of stores is of note. It has been suggested that each served a separate clientele. One of the persistent features of Dublin, even today, is that those who live on the south side of Dublin are less inclined to use the shops across the Liffey in the northern core. This perception seems to have been well-established in the early years of the twentieth century. It was noted by Douglas Goldring, an English visitor to the city in 1917 that “the more elegant Dubliners rarely cross the O’Connell Bridge unless they are on their way to a race meeting in the Phoenix Park or being carried, toes turned up, upon their final journey to Glasnevin”. The funeral procession of Paddy Dignam in the Hades episode in Ulysses, which travels from Sandymount to Prospect Cemetery in Glasnevin, captures one such enforced journey from the south to the north of the city.

However, Joyce does not convey a sense of the depth of poverty in the city that was manifest in the appalling housing and persistently high death rates, something Sean O’Casey captured vividly in his plays. Nor does the reader of Ulysses get a picture of the lives of the wealthy Dubliners living in Pembroke. Rather, the characters that emerge tend to be those in the lower echelons of the middle classes, respectable without wealth.

Joseph Brady is senior lecturer in the School of Geography, Planning and Environment, UCD. He has published widely on the historical and spatial development of Dublin as a city. He is co-editor with Anngret Simms of a series of books on the development of Dublin, the latest volume of which, Dublin: The Emergence of the Modern City 1930-1950, was published in autumn 2014.

Taken from Voices on Joyce, which is being launched in Newman House on June 9th, published by UCD Press, €50