It has taken more than 460 years but the North-East Passage, the sea route over Europe to Asia, looks set to transform world trade, explains the author of Merchant Adventurers 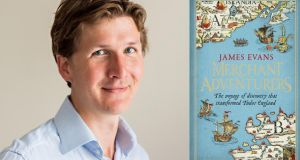 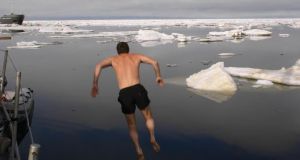 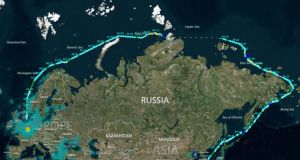 The Northeast Passage route taken by the Yong Sheng 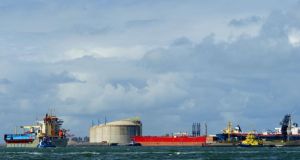 A Chinese cargo ship arrives at the haven of Rotterdam, on September 10, 2013. The Yong Sheng is the first commercial Chinese ship to transit through the Northern Sea Route, which connects the Atlantic and Pacific oceans by way of the Bering Strait and Russias northern coast. Photograph: Robin Utrecht/AFP/Getty Images)

In the summer of 2013 a huge merchant ship, the Yong Sheng, succeeded in making it through the North-East Passage – or the Northern Sea Route as it is sometimes known. She was the first merchant ship to do so. And she won’t be the last.

On August 8th she set out from Dalian, China’s most northerly warm-water port, carrying steel and industrial machinery. She paused briefly in Shanghai, then in Busan in South Korea. Twenty-one days later, after rounding the North Cape, as the English long ago named the tip of Scandinavia, she arrived in the Dutch port of Rotterdam.

Had she sailed along the traditional southern route, beneath China, India, and through the Suez Canal, the passage would have taken almost two weeks longer, a significant period of time in the world of modern commerce. It seems likely that the North-East Passage will one day come to transform world trade, just as Europeans thought that it would, at the time that they first ventured to explore it, midway through the 16th century.

The first voyage was a memorable one. In the early summer of 1553 three ships set out from London, led by their overall captain Sir Hugh Willoughby, and by the chief pilot of the expedition, Richard Chancellor. Diplomatic observers, including some from a great, global power like Spain, fretted about their intended route. They meant, it was reported, to find a new “road to the Indies”. But none was sure which way they meant to go: north-west, north-east, or even directly north over the pole?

As it happened they went north-east – towards the coast of Scandinavia, and up towards the point at the tip of Europe they christened the “North Cape”, in common with the Cape of Good Hope beneath Africa. Land on the surface of the Earth, they believed, must be broadly symmetrical – God must have made things thus, beautifully, and simply. The northern coastline of Eurasia would descend, after the cape, southwards, into warmer, less hazardous water.

They didn’t expect things to be easy. Nobody really knew, it was admitted, whether a passage existed by this route. There were reasons to think that it must do – such as the ancient story of a party of Indians shipwrecked on the coast of Germany, who had got there, it was thought, through a channel to the north-east. And even if the passage did exist, of course, Europeans didn’t know what hostile navies, or what terrifying monsters of the deep, they might encounter on the way.

The expedition’s inspiration and organiser, Sebastian Cabot, had been to South America. And so he warned his crews before they went of hostile men who could swim in the water (an uncommon skill at the time), and who would kill and even eat visiting strangers given the chance – based on his own experience of an aggressive “Indian” tribe. A map he had helped to make warned of evil “night people” living in the far north, who would devour anyone who tried to pass, as well as of beasts – half man, half pig – which would attack men they encountered.

These, of course, the crews of 1553 did not meet. But the expedition certainly did not work out as planned. Separated in a great storm, two of the three ships became lost in the Arctic ocean, muddled by maps which were hopelessly inaccurate and misleading. The third, led by Richard Chancellor, made its way into the White Sea, thinking to press on through a passage, if it was there, the following year.

When they found themselves in Moscow, at the court of Ivan the Terrible, the new trading relationship they looked like being able to establish with Russia meant their plans changed and they decided to head home to report. But over ensuing years, as attempts were made to sail further, it proved harder than was hoped. A number of voyages became stranded amid snow and ice, as the land moved further and further to the north, and the attempt was finally abandoned.

The world, then, was in the grip of what became known as the Little Ice Age. Conditions in the Arctic were a good deal more inclement than they are now. And even today the Yong Sheng had to travel in the company of a Russian ice-breaker, because the land of northern Asia reaches considerably further north than had been hoped.

But the world is warming. Ice, in the Arctic, is retreating. And while climate scientists disagree about how long it might take (a few decades being the favoured estimate) most believe that the North-east Passage will, before long, become a viable option – and will have, one day soon, the sort of impact on world trade about which merchants dreamed long ago.

But now, of course, the passage is being explored not from Europe but from the other end. The Yong Sheng, as its name suggests, was Chinese, not European. And that, of course, tells its own interesting story about the shifts which have taken place since the 16th century in the balance of economic power.