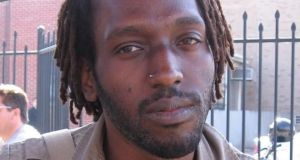 Kei Miller: is said to have discovered the power of his own voice in Kingston, Jamaica, when, as a young preacher, he induced fainting fits

Miller, 35, who is said to have discovered the power of his own voice in Kingston when, as a young preacher, he induced fainting fits, won the £10,000 prize for The Cartographer Tries To Map A Way To Zion.

He won poetry slams after coming to Britain to pursue an academic career and went on to teach creative writing at Royal Holloway, University of London. Miller has published three collections of poetry and a collection of short stories about homophobia in Jamaica. His winning collection features a cartographer “trying to map his way to the rastaman’s eternal city of Zion”.

Chair of the judges, broadcaster Jeremy Paxman, said that the “beautifully voiced collection ... struck us all with its boldness and wit. Many poets refer to multiple realities, different ways of observing the world. Kei doesn’t just refer, he articulates them,” he said.

The runners-up were Derry poet Colette Bryce for The Whole and Rain-Domed Universe, John Burnside for All One Breath, Louise Glück for Faithful and Virtuous Night and Hugo Williams for I Knew the Bride.

Liz Berry won the first collection prize for Black Country, named after her place of birth, for poems which former Newsnight host Paxman said makes “you look at the world differently”. “Her book is a real appreciation of a place that’s not often appreciated,” he said. “She is a fresh, exciting and distinctive new voice. Her work is that rare thing: a collection that leaves you feeling full of real optimism and hope.”

Stephen Santus, who teaches at a language school in Oxford, won the best single poem prize for In A Restaurant, which is his first published work.

Paxman said: “His poem takes an everyday simple gesture, one we all recognise, and unpacks it. The poem is simple, on first sight, but it becomes more resonant with each re-reading.”

The Forward Prizes for poetry, celebrating their 23rd year, are awarded to established and emerging poets in the UK and Ireland.