Irish women, often disguised as men, have fought on land and sea for centuries 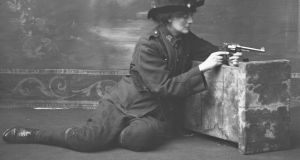 Countess Constance Markievicz, the famous Irish Citizen Army volunteer, condemned to death for participating in the 1916 Easter Rising, once advised Irish women joining the fray to “Dress suitably in short skirts and strong boots, leave your jewels and gold wands in the bank, and buy a revolver”.

A few months later, the countess was facing the gallows but was spared when the court recommended mercy, “solely and only on account of her sex”. But while this woman in arms was then regarded as a stark anomaly, she belonged to a rich tradition of Irish women who passed as men to enlist as soldiers, or to sail the seas.

While Markievicz’s contemporary, Dora Sigerson Shorter, captured women’s eternal longing for adventure in her poem A Vagrant Heart with the lines, “O to be a woman to be left to pique and pine/ When the winds are out and calling to this vagrant’s heart of mine”, her foremothers dated back to the 16th century. Among the earliest documented cases of Irish warrior women was the Pirate Queen, Grace O’Malley or Granuaile, who, according to Sir Richard Bingham, Connacht’s English governor, “overstepped the part of womanhood” by taking command of her father’s ships. Her vessels traded and pirated their way from from Scotland to Spain for half a century. Grace even gave birth to her youngest son while at sea.

The Pirate Queen may have been denounced by the English president of Munster as “the great spoiler and chief commander and director of thieves and murderers at sea”, but she wasn’t the last. Among the most notorious sailors turned pirates was Anne Bonny who was tried in a Jamaican court in 1720, for “rob and plunder of several ships”, alongside the notorious crew of Captain “Calico” Jack Rackham’s ship. Bonny, the illegitimate daughter of a Cork solicitor, left Ireland for Carolina as a child, along with her mother and putative father, to escape social censure. But early on she revealed a willingness to fight for her independence, once defending herself against a potential rapist, and refusing an arranged marriage to marry her lover, an impoverished sailor.

The couple left Carolina for Providence Island but when Anne discovered her sailor was “not worth a groat”, she left him for Calico Jack and joined his pirate crew. After only a few months at sea she fell pregnant, briefly landed at Cuba to give birth and then rejoined Rackham’s pirate ship. Witnesses at the 1720 trial described how Anne and her fellow female pirate Mary Read “handed Gun-Powder to the Men, That when they saw any Vessel, gave Chase or Attacked, they wore Men’s Cloaths”. Bonny and Read, they added, were with the crew “of their own Free-Will and Consent” and “were both very profligate, cursing and swearing much”.

Whatever their motives, the two women’s fate would be intertwined. President Sir Nicholas Lawes pronounced the female prisoners guilty as charged of “Piracies, Robberies and Felonies”. They were sentenced to be executed but “plead the belly” and both women were granted a stay of execution. Mary Read died in prison before her child could be delivered but Anne Bonny was reprieved and disappeared.

While Ireland’s most famous female pirate was languishing in Jamaica, its most feted female soldier, Christian Davies, had settled into a poverty-stricken retirement in England. But before her burial in 1739, when three grand volleys were fired as her casket was lowered into the grave at the Pensioners’ College, Chelsea, Christian had been celebrated for her long military career. The Duke of Argyll, under whom she served in the field, presented her to Queen Anne who awarded her a pension of a shilling a day for life. When her memoir, The British Heroine, was published in 1740, it inspired a poet to declare her “a greater Joan than France”, and another adoring fan sent her a hoop skirt.

The daughter of a Dublin publican, born Christian Cavanagh in 1667 and also known as Kit Cavanagh and Mother Ross, she rose to fame after disguising herself as Christopher Welsh to enlist with Captain Tichborne’s company of foot, and serve during the Nine Years’ War and the War of Spanish Succession. She always claimed that she had enlisted, leaving behind a thriving business and several children, to search for her husband Richard who had been press-ganged into the army. When finally reunited, during the battle of Blenheim and after a 13-year separation, she made Richard swear that they would “live as brothers” until the campaign had ended.

Davies’s true identity was only discovered when she was wounded at the Battle of Ramillies in the Spanish Netherlands in 1706 and resumed her marriage to Richard who died three years later. She was soon remarried to a grenadier who also died in battle and by 1712, had retired from the military life and left for England. When Christian eventually returned to Dublin, she was unable to reclaim her pub but married for a third time, a soldier named Davies, and returned to London.

Although Irish women would take to the high seas for another century, there are also documented cases of their military exploits on land. Among the most famous is Jennie Hodgers, born at Clogherhead, Co Louth, in late 1843. Following her mother’s death, Jennie stowed away in an American-bound ship from Liverpool, making her way to Belvidere, Illinois where she assumed the identity of Albert Cashier.

Responding to President Lincoln’s call for soldiers in 1862, Cashier enlisted in the 95th Illinois Infantry for a three-year term with recruiters noting that he was “small in stature”. Cashier fought throughout the war, often taunting the enemy in battle, travelled some 9,000 miles, and was honourably discharged on August 17th, 1865. Although Cashier lived quietly in Illinois, following a car crash Albert’s sex was revealed and in 1913, became a national sensation. A century later, Cashier’s story has been recovered by Fiona Ní Eidhin, who produced the 2018 TG4 documentary, Jennie Hodgers – Saighdiúir Lincoln, and as a musical, The Civility of Albert Cashier.

The details of Jennie Hodgers/Albert Cashier’s life follows the trajectory of many working-class women of the past who chose to live as men, preferring the dangers of armed conflict to the alternatives open to their sisters. Although their history was often ignored or mythologised these figures often inspired other women to seek out alternative lives where, with courage, ingenuity and imagination, they overcame society’s restrictions. The winds called and these women found remarkable ways to answer them.
Julie Wheelwright is the author of Sisters in Arms: Female Warriors from Antiquity to the New Millennium (Osprey, £18.99 hardback)