This work, as well as being beautifully illustrated, succeeds as a memoir, an anthology and as an outstanding act of theatre criticism, writes Patrick Lonergan 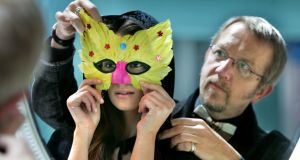 In the summer of 2003, the designer Joe Vanek made what he calls a “pilgrimage” to the Czech Republic. He had two aims: his father had been born in the Czech town of Olomouc but, as a result of the second World War, had been forced to flee to England – so Vanek’s journey there was a kind of homecoming, a long-awaited attempt to rediscover his family’s roots.

But he also had professional reasons for the visit. He’d been commissioned to design the set for the world premiere of a new work by Brian Friel – a drama about the Czech composer Leos Janácek, with the action taking place in Janácek’s villa in Brno.

The play – given the suggestive title Performances – is both realistic and fantastical, moving fluidly between different theatrical realms. It shifts between the 1920s and the present, between music and speech, between the intimacy of lovers and the cold evaluation of the disinterested academic – a series of strange combinations that make the play one of Friel’s most experimental works.

The audience needs to believe that the world Friel represents is authentic, true to life – but the setting also needs to be evocative, allowing our imaginations to take flight.

Those combinations in turn place huge demands on the designer. Vanek had travelled to the Czech Republic to find ways of meeting that challenge.

But when he arrived in Brno, disaster struck: Janácek’s villa was closed for unscheduled renovations. Somehow Vanek managed to enlist help, persuading a “charming woman” who worked nearby to get him into the building. He quickly took the photographs that would inspire the set which appeared on the Gate Theatre’s stage when Performances premiered there at the 2003 Dublin Theatre Festival. Unsurprisingly, the design was widely praised.

This is a simple story, but it encapsulates perfectly the importance of Vanek for Irish theatre and it underlines, too, the strengths of his book Irish Theatrescapes, a fascinating and stimulating review of his career.

By placing his family background at the heart of his discussion of Friel’s play, Vanek reveals the extent of his personal investment in his work. His design for Performances is not just a visualisation of what Friel imagined: it also expresses the artistic vision, imagination and personality of Vanek himself. That beautiful set design was made possible, after all, by Vanek’s refusal to be stopped by a locked door: a telling example of his modest determination, and an illustration of the accuracy of WB Yeats’s observation that great art is made possible only through hard work.

Irish Theatrescapes provides illustrated chapters on 34 of the productions that Vanek has worked on. As the book’s subtitle states, these are categorised into three groups: new Irish plays, adapted European plays, and Irish classics.

Each chapter features an introductory essay by Vanek himself, and there are reproductions of relevant programme notes by such authors as Colm Tóibín, Roy Foster and Richard Pine. There are also essays by many of the artists Vanek has worked with: Friel, Frank McGuinness, Marina Carr, John Banville, Sebastian Barry and many others.

These contributions make the book an invaluable compendium of writing about Irish theatre. But it is also much more than that, featuring hundreds of photographs, sketches, and designs for sets and costumes, stretching from the 1980s to the present.

These images range from the familiar to the intimate. We see again the glorious cornfield and kitchen that earned Vanek a Tony Award nomination for his work on Friel’s Dancing at Lughnasa. But we’re also shown a photograph of his parents Sheila and Karel, which he found in a chocolate box in his family home and used in Hugo Hamilton’s adaptation of his book The Speckled People.

He brings us from the first World War trenches of McGuinness’s Observe the Sons of Ulster and O’Casey’s Silver Tassie, to the opulent drawing rooms of Chekhov, Wilde, and Sheridan. And along the way, he writes constantly of the value of collaboration: the words “we” and “our” appear repeatedly throughout the book – the words “I” and “my” rarely.

There are his collaborations with playwrights. Vanek writes of how he persuaded Brian Friel to agree that the set for Molly Sweeney should be presented in glorious colour rather than the black world that Friel had originally envisaged.

And there is his work with lighting designers: he explains how his bleakly monochromatic set for Tom Kilroy’s Secret Fall of Constance Wilde was transformed by blasts of colour in the lighting design of Nick Chelton - whose effects Vanek compares to a Rothko canvas. And of course there is the collaboration with the director – particularly Patrick Mason, with whom Vanek has worked 44 times.

We also find repeated evidence of Vanek’s incisiveness and care as an interpreter of drama. As McGuinness puts it in a short contribution to the volume, Vanek “reads plays as they are written; in his theatre the verbal is the visual”. Or, as Brian Friel writes – in what must be one of his last pieces of published work – Vanek has an ability to use images to “nudge us towards the very core” of a play.

We in Ireland do not have a strong track record of understanding and appreciating design for stage and screen – of articulating how people such as Vanek can “nudge us” towards a deeper understanding of a writer’s work. We routinely celebrate the achievements of our writers on Broadway, for example, yet last year the Irish designer Bob Crowley’s achievement in winning a seventh Tony Award in 21 years went largely unnoticed here.

There are signs of improvement, however. The Irish Theatre Institute has just published a wonderful book called Stage and Screen Design Ireland, accompanied by the website stageandscreendesignireland.ie. But much more needs to be done.

Vanek’s Irish Theatrescapes will play an essential role in advancing our knowledge. As well as being beautifully illustrated, it succeeds as a memoir and anthology, and as an outstanding act of theatre criticism. It shows irrefutably that we in Ireland need to appreciate that designers are artists in their own right – and that their work merits the serious evaluation that actors, directors and writers take for granted.

Dancing With The Stars backstage: ‘I’d love to see Danny Healy Rae out there’
Real news has value SUBSCRIBE