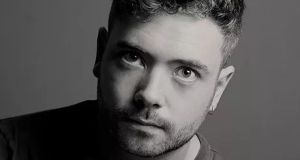 Two Irish poets, Seán Hewitt, a fiction reviewer for The Irish Times, and James Conor Patterson, from Newry and now living in Belfast, have won Eric Gregory Awards at the Society of Authors’ Awards at Southwark Cathedral, London this evening.

They each win £4,725 for a collection of poems by a poet under 30, Lantern and Bandit Country respectively. The 81-year-old Irish debut novelist Norma Macmaster was the runner-up for the inaugural Paul Torday Memorial Prize.

The evening was hosted by poet Jackie Kay, with an introduction by society resident, Philip Pullman. Nine awards, uniquely judged by writers for writers, were presented to 32 writers with a host of debut names joining established award-winning writers of fiction, nonfiction and poetry, sharing a prize fund of £100,000.

Kay said: “I’m enormously proud and gratified to have been granted this most lovely opportunity of presenting writers with the Society of Authors’ Awards. These awards, I know from personal experience, are potentially life-changing. They bring writers in from the cold. They give writers a huge boost and validation. They tell them that their trials and tribulations have been worth it after all, after the long haul. Writing is a confidence game, and often writers’ confidence is shot to pieces. An award like this can put self-doubt in the cupboard for a while.”

In an evening that celebrated diverse voices and the inclusivity and empathy that comes from gifted storytelling, winners included double Eric Gregory Award winner, poet Sophie Collins (a winner in 2014 and 2019) for Who is Mary Sue? (Faber & Faber); 2019 Women’s Prize longlisted Kelleigh Greenberg-Jephcott, winner of the 2019 McKitterick Prize for Swan Song (Hutchinson); 70-year old debut author Anne Youngson, who won the inaugural Paul Torday Memorial Prize for Meet Me at the Museum (Doubleday); Manchester-born James Clarke, who won the £10,000 Betty Trask Prize for The Litten Path (Salt), a story about the 1980s miners’ strike; Romany writer Damian Le Bas, who won both a Somerset Maugham Award for The Stopping Places (Chatto & Windus) and a Travelling Scholarship; 2019 Rathbones Folio prize-winning poet Raymond Antrobus, who also received a Somerset Maugham Award for The Perseverence (Penned in the Margins); Syrian born Dima Alzayat, winner of the ALCS Tom-Gallon Trust Award for Once We Were Syrians; and Julian Jackson, winner of the Elizabeth Longford Prize for Historical Biography for A Certain Idea of France: The Life of Charles de Gaulle (Allen Lane).

The judges for each award, including Kate Mosse, Gary Younge, Mark Lawson, Anita Sethi, Vaseem Khan, Susan Hill, Stuart Evers, Irenosen Okojie and Jen Campbell were united in their praise for the “mesmeric, restless, genre-bending, emotionally devastating writing from 32 writers who have taken us from the miners’ strike and travelling communities, to Truman Capote’s mind, each exploring the gamut of human experience from friendship, family and belonging, to what it means to be other.”

Hewitt won the Resurgence Prize in 2017 and won a Northern Writers’ Award in 2016. His poetry has been published in The Poetry Review, Poetry (Chicago), and the New Statesman, among others, and his debut pamphlet was published by Offord Road Books in 2019. He read English at Girton College, Cambridge, and received his PhD from the University of Liverpool in 2017. He is a research fellow at Trinity College Dublin and is a book critic for The Irish Times.

Patterson has a long track record of work published in magazines and journals including The Irish Times, Magma, New Statesman, Poetry Ireland Review, and The Stinging Fly. He was writer-in-residence for the CS Lewis Festival in Belfast in 2018, winning the iYeats ‘Emerging Talent’ Award (August 2013), shortlisted for the Bridport Prize (October 2014), longlisted for the National Poetry Competition (2014 & 2017), highly commended for the Patrick Kavanagh Award (September 2015), and selected for the Poetry Ireland Introductions series (May 2015). In December 2014 James graduated from Queen’s University Belfast with an MA in Creative Writing.

The Paul Torday Memorial Prize, awarded to a first novel by a writer over 60, went to Anne Youngson for Meet Me at the Museum. The prize is named after Torday, who published his first novel Salmon Fishing in the Yemen at the age of 60. Kate Mosse, Paul Torday Memorial Prize judge, said of runner-up Norma MacMaster’s Silence Under a Stone: “A beautiful, subtle, elegant novel! A story of closed communities, of the schisms of religion, of fear, and faith, of anger and being unable to forgive, this is a beautifully written and very moving story.”