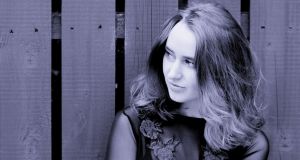 Susannah Dickey: the Belfast-based writer’s first novel will be published next month

Susannah Dickey, who is from Derry, is among the 32 recipients to benefit from the UK’s biggest prize fund, which is awarded by fellow authors; this year’s winners showcase “storytelling as activism and literature as a catalyst for change”, tackling subjects including war, queer identity, race and climate change.

Dickey has won part of the Eric Gregory Award, for a collection of poems by a poet under 30, for Bloodthirsty for Marriage, published by Bad Betty Press. She shares the prize with four other writers; each receives £5,670, or about €6,300.

Dickey lives in Belfast, where she is doing a PhD in creative writing at the Seamus Heaney Centre; her debut novel, Tennis Lessons, is published next month by Transworld.

Announced on video by the Society of Authors’ chairwoman, Joanne Harris, eight other awards were shared by 27 other emerging and established authors for novels, short stories, nonfiction and, in a new prize, illustrated children’s books, the Queen’s Knickers Award.

“The nine awards were judged as lockdown began,” Harris said. “We announced the shortlists at the height of restrictions. And we’re celebrating today in videos and on social media, instead of with a crowd of 500 at Southwark Cathedral. So perhaps it is a lucky coincidence that, in the week we announce the winners, many of our bookshops have started to reopen. What better way to celebrate today’s winners by buying and reading them?”