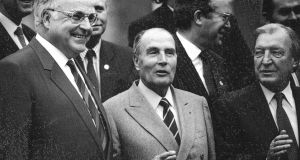 In 1965, minister for agriculture Charlie Haughey asked European commissioner Jean Rey an “academic question”: could Ireland join the European Economic Community without Britain? Charles de Gaulle’s 1963 veto of UK membership had doomed Ireland’s first application (“a cold douche for a keen convert” crowed the British conservative press), but Ireland was keen to escape its position as an economic satellite of the UK, and had sought new allies on the continent. “Britain will perhaps always be our largest market”, taoiseach Seán Lemass had told West German chancellor Konrad Adenauer in 1962, but outside of the common market the “former empire” was “likely to decline”, and Ireland would follow Europe, not an isolated Britain.

Half a century later Brexit has given such questions renewed relevance, and so Mervyn O’Driscoll’s latest excellent book on Irish-German relations could hardly be more timely. Our views of Ireland’s international relations, he argues, remain dominated by an “Anglo-American” focus that “ignores the continental, and particularly the German factor”: from 1949-1973, West Germany “played a pivotal role” in encouraging Ireland to choose a path of modernisation and European integration, a path out of “entrapment” in Britain’s sphere.

Following his recent history of Ireland’s controversial relations with Nazi Germany, O’Driscoll shows how the new Republic of Ireland was an ally to the new West Germany at a time when, as one Berliner told the Irish Independent, the war-ravaged country was “friendless and starving”. Food aid, campaigns to help German children, and friendly relations were all gratefully accepted: “We will never forget the generosity”, said president Theodor Heuss when gifting the statue of The Three Fates to St Stephen’s Green in 1955. Dublin even hosted many of the new Federal Republic’s first postwar sporting fixtures, including a 1951 football match at Lansdowne Road that Ireland won 3-2 (with a West German equaliser ruled out, their ambassador noted, by the British referee).

Yet O’Driscoll goes beyond the official rhetoric of the two countries’ “ancient links” to show that relations were not without problems. Government fears of “an influx of indigent Germans”meant the retention of visa requirements and fees for West Germans notably longer than elsewhere. Ireland’s refusal to join Nato (due to partition rather than neutrality) irritated Bonn, as did our attitude to the emerging European project: Éamon de Valera told the Council of Europe that if political integration was involved, “the mainland” should go on “without us”. O’Driscoll’s rigorous research in the German state archives is particularly illuminating, and this is a history from two sides: German officials thought the 1950s Irish State’s collective mentality was beset by “incomprehensible, unsound, or counterproductive paradoxes”.

With that decade’s intractable economic crisis, however, things began to change. O’Driscoll argues that the policy experimentation of the second Inter-Party Government, while “ad hoc and primitive”, sowed the seeds of a national reorientation. Foreign direct investment offered a way out of economic stagnation, and in 1955, tánaiste William Norton visited Bonn to inform the industrialists of booming West Germany that Ireland could offer what the British tabloids called “a back-door” to the UK market. The new IDA targeted German trade fairs and media, while the new Bord Fáilte capitalised on future Nobel laureate Heinrich Böll’s 1957 Irish Journal, which popularised a positive image of Ireland; we had the added advantage, then-civil servant Conor Cruise O’Brien noted, of being “one of the few nearby countries with which they have not recently been at war”.

By 1960, West Germany was Ireland’s second-largest trading partner, and German businesses were producing cranes in Killarney and pencils in Fermoy. To Bonn’s approval, Lemass made Irish foreign policy more explicitly “western”, declaring in 1960 that Ireland was not “neutral on the ideological issues” of the cold war: “we are clearly on the democratic side”.

Yet democratic Europe’s divide into “sixes and sevens” (the EEC and the rival European Free Trade Area, which included the UK) left Ireland among a “forgotten five”, alongside peripheral Iceland, Greece, Turkey, and fascist Spain, “outlawed from the economic comity of Europe”. “The best situation”, Lemass told the Dáil in 1960, was to join the EEC (hopefully alongside Britain), and Ireland relied heavily on diplomatic support from West Germany – our “best friend and ally” as The Irish Times put it in 1962 – on the rocky road to Europe.

There were, however, limits to German support. Frustrated with the British handling of Northern Ireland, Ireland sought German backing for multilateral solutions. Wary of interfering in British affairs (especially after the attempts at gun-running through Hamburg during the 1970 Arms Crisis), Bonn kept its distance, believing joint accession to the EEC in 1973 would offer a new era in British-Irish relations.

There were more domestic troubles too. O’Driscoll charts a 1960s wave of simmering disquiet about foreign influence, particularly Germans buying rural land: “we have no room in this country for Nazis”, declared former minister for agriculture Oliver J Flanagan in 1969 (he clarified that he “considered all Germans Nazis”). Provisional IRA arson attacks targeted German landowners while the organisation warned of a “Bay of Pigs” style invasion by the “foreign cartels” re-colonising Ireland. Foreign land purchases were negligible (“it will take the Germans a long time to wipe us out”, joked one minister), but in the controversy O’Driscoll sees “tensions at the heart of the model of Ireland’s top-down modernisation” that would long linger in populist Euroscepticism.

In an epilogue that runs up to the present day, O’Driscoll argues that beyond the fringes, Ireland proved “as pro-European in sentiment as the original six member states”. Indeed when many balked at German reunification after the fall of the Berlin Wall, the 1990 Irish European presidency facilitated a united Germany: “I shall not forget this”, a grateful chancellor Helmut Kohl told Haughey. As a partner in an enlarging Europe, Ireland was “in the German camp”, moving “out of Britain’s shadow”.

While boomtime Ireland often claimed to be “closer to Boston than Berlin”, and the troika bailout often strained relations, Germany has re-emerged as a key Irish ally. Brexit has clouded the British-Irish partnership that flourished under the European umbrella, presenting new threats to the delicate balances that have underpinned our peace and prosperity. With Ireland’s future now in the hands of negotiations in Brussels, O’Driscoll’s revealing book offers a powerful reminder that our route to true independence has been through partnership with our friends on the continent.

Dr Christopher Kissane is a historian at the London School of Economics & Political Science.