Intercept: The Secret History of Computers and Spies by Gordon Corera review

This is a useful guide to cyber warfare but the density of information may make readers feel like data-trackers struggling to discern key points amid the torrent, writes Rob Doyle 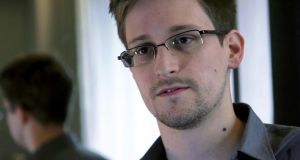 In 2013, rogue National Security Agency employee Edward Snowden revealed that the US government was collecting data on all its citizens, abetted by the forced compliance of telecoms companies. Snowden’s leak stunned many into an awareness of the scale and power of the organisations seeking to monitor the data generated by our increasingly online lives. Photograph: AP Photo/The Guardian

Book Title:
Intercept: The Secret History of Computers and Spies

In the decades since its inception, the internet has become the zone of an immense war. Nation states, corporations, hackers and hacktivists, terrorist organisations and lone wolves all fight for the control of information and the internet’s future – to determine who will be its masters and who its serfs. To the average internet user, this war has been largely invisible. In 2013, however, rogue NSA employee Edward Snowden revealed that the United States government is collecting data on every one of its citizens, abetted by the forced compliance of telecoms companies. Snowden’s leak stunned many into an awareness of the scale and power of the organisations seeking to monitor the data generated by our increasingly online lives.

In his third book, BBC security correspondent Gordon Corera examines the intimate links between computers and espionage (he is also the author of a history of Britain’s secret service, MI6). While the story he tells takes us back to the birth of computers (indeed, to the time when they still came in human form: “We may now construct a machine to do the work of this computer,” wrote Alan Turing in a paper here considered “one of the pivotal works of the twentieth century”), it is with the internet age that Corera’s book is chiefly engaged. He maintains a Beebish neutrality towards most of his material, occassionally betraying a sympathetic attitude towards the data-surveillance work being done by the NSA, Britain’s GCHQ and other agencies monitoring the data-deluge with an eye to the public good.

Early chapters rehearse the much-mythologised second World War years, when British code-breaking genius concentrated in Bletchley Park cracked Germany’s Enigma machine, altering the outcome of the war. The Cold War followed, and with it the classical era of espionage, when spies skulked about Europe muttering code words like characters in a Le Carré novel. So far, so familiar. The book comes more into its own when the technology changes, forcing the intelligence organisations to follow suit, though without abandoning the tricks and tics of the pre-cybernated era. Computers, Corera stresses, have always been vulnerable to surveillance and attack; likewise, the internet was not created with security in mind, and it is surely too late now to turn back and start afresh. The vulnerabilities are in the system, and thorny political questions arise about how far we should cede our right to privacy to the agencies tasked with minimising the threats.

Conscientious citizens like Snowden, concerned about the dangers to democracy posed by state bodies with the means to achieve “Total Information Awareness”, are not a recent phenomenon. In the 1970s, one US senator issued a dramatic warning of what could already be discerned on the horizon: “If this government ever became a government of tyranny, if a dictator ever took charge in this country, the technological capacity that the intelligence community has given the government could enable it to impose total tyranny, and there would be no way to fight back. (…) That is the abyss from which there is no return.”

As awareness grew of the revolutionary implications the internet would have on human life, so too did communities and ideologies dedicated to defending its democratic or anarchistic potentialities. Thus emerged the cypherpunks, “activists who were evangelical about spreading cryptography”. Their “crytpo wars” are still raging in this uneasy post-Snowden world. For cypherpunks (such as Julian Assange in his early guise as Mendax), encrypting information to render it incomprehensible to prying eyes was akin to the right to bear arms: a self-defence against the forces of totalitarianism.

The book’s most interesting sections are those which detail startling but relatively undiscussed episodes from the internet’s history. The role of state-sponsored, corporate cyber-espionage in the economic rise of China makes for illuminating reading. From behind its Great Firewall, which blocks access to many websites from the nation’s populace, China operates a vast hacking and espionage campaign against the major Western powers that has enabled it to glean countless technological secrets. Even as powerful a corporation as Google was the victim of a notorious hack that soured its relations with China. Hacking in China is carried out on an industrial scale: one major offensive was traced to a 12-storey building in a rundown part of Shanghai, where “hundreds, perhaps thousands of people” worked together in a hack-factory under the aegis of the People’s Liberation Army. Former NSA and CIA director Michael Hayden says: “I stand back in awe at the breadth, depth, sophistication and persistence of the Chinese espionage effort against the United States of America.”

And that is before we even consider how the West has invited China right in through the front door, via the telecoms mega-corporation Huawei. That company controls so much of the West’s information infrastructure, including the fibre-optic cables through which the internet’s data flows, that some are concerned that China could even hit a “kill switch”, shutting down the internet in nations which fall foul of it. Corera admits that a degree of Sinophobia may be behind such apocalyptic scenarios, but accepts too that they cannot be discounted.

If the internet is at war, it may have already seen its atom bomb. In 2010, a cyber-weapon named Stuxnet penetrated a vast, subterranean hall in the mountains of Natanz, Iran, where thousands of centrifuges were spinning with the aim of producing enriched uranium, used in the creation of nuclear bombs. What made this attack, believed to be a joint effort by the USA and Israel, a landmark moment in cyber-warfare is that the malign code succeeded in physically destroying the centrifuges. To Hayden, this peactime attack, causing physical destruction on “what another nation would only describe as critical infrastructure”, had about it the “whiff of August 1945” and the advent of atomic warfare. Stuxnet is likely only the first such “crossover” attack, as states employ cyber-weapons to sabotage non-virtual targets. (Sure enough, after Stuxnet Iran kicked right into retaliation mode: a Revolutionary Guards commander boasts that “the Basij Cyber Council has trained 1,500 cyber warriors who have assumed their duties and will in future carry out many operations.”)

Elsewhere, Corera sketches out a history of computer viruses, and reports on such incidents as the humiliating Sony hack of 2014 and, of course, Snowden’s NSA revelations. The war for the internet has spawned a glamorous new lexicon, whose terms pepper the book: cyber militias, logic bombs, hacktivists, spear phishers, cypherpunks, the cyber-industrial complex. The density of information can leave the reader feeling like a data-tracker struggling to discern key points amid the torrent. Those keen to learn about the relationship between the data we generate and the powers that be who have designs on them, though, will gain perspective on the postwar information age, and the kind of world our networks are building for us.

Rob Doyle is the author of the novel Here Are the Young Men and This Is the Ritual, both published by Bloomsbury and the Lilliput Press